A study of score (NASDAQ: SCOR) shared with Cointelegraph revealed data on the main Bitcoin (BTC) and cryptocurrency platforms in Latin America.

According to the study, during April 2021, in Latin America, the main social networks in the world registered 95 thousand mentions in relation to exchanges: more than 90% were carried out by Twitter and represent an increase of 30% compared to the previous month.

“The interest in cryptocurrencies is a consequence of the new technological and economic revolution that brought the blockchain concept, which guarantees a decentralized and intermediation-free control, also enabling the reduction of costs and time in transactions compared to other investment systems”, comments Eduardo Carneiro, General Director of Comscore.

In Brazil, even with a drop of 41% in the second quarter, bitcoin was appointed as the best investment in the country in the semester. The cryptocurrency was the only asset to surpass the General Market Price Index (IGP-M), which rose 15% in the first half.

In the Comscore survey, Binance shows more than 60% of social mentions, followed by Coinbase with 15%. Both are the exchange houses that generate the greatest volume of mentions in the region.

In addition to this high, Binance also presents growth and reach of its platform in Latin Americaa, especially in Argentina and Brazil, where it recorded greater cross-platform reach during February 2021. 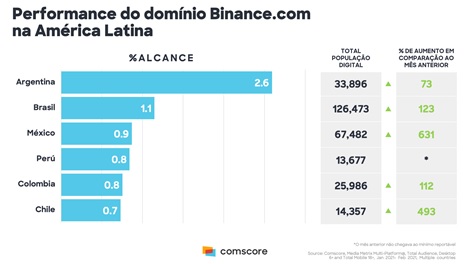 As for the unique visitor trend data at Binance over the past year, although the trend for cross-platform users is similar in both Argentina and Mexico and Brazil over the past few months, usage behavior is very different in each market.

In Brazil, accesses made exclusively via mobile devices represent 83% of the total, with an average consumption of daily minutes per visitor of 42 minutes.

As such, Comscore has identified that Binance’s social content strategy is also able to capture the attention of many users.

In April 2021, after a strategic announcement on the company’s official Twitter account, Binance reached a volume of more than 3,900 mentions in social media.

That same month, Coinbase also recorded a high volume of conversation on the networks, when it became the first virtual currency company to join the Nasdaq. This achievement established more than 271,000 social mentions worldwide, with Latin America accounting for 1.4% of that volume.

“Without a doubt, the cryptocurrency trade is more than a trend and is strong in the Latin American region. The great technological revolution in the sector impacts the behavior of online and offline users. Therefore, we must be aware of the possibilities that cryptocurrencies can offer the market”, concludes Carneiro.

According to a report by Cointrader Monitor (CTM), since February 2021, the exchange with the highest volume of Bitcoin trades in Brazil is Binance, having traded 11,625.17 Bitcoins in July.

Also according to the portal, the Binance was responsible for 38.6% of Bitcoin trading in Brazil during the month of July.