Despite being increasingly involved in the cryptocurrency market, traditional banks in Brazilinstead, criticizing cryptoactives and declaring that they are used to commit crimes and money laundering practices.

The theme of money laundering and cryptocurrencies was one of the highlights of the panels at the 11th Congress on the Prevention of Money Laundering and the Financing of Terrorism, promoted by Brazilian Federation of Banks (Febraban) and which had some of the main banks in the country.

As argued by financial institutions, exchanges and fintechs that offer exposure to the cryptoactives market they do not follow the same rules as the traditional financial system and therefore would be vulnerable to being used by criminals to hide illicit money.

USP professor and partner-lawyer at Bottini and Tamasauskas, Pierpaolo Cruz Bottini, stated that the digitization of the economic system and its consequent De-bureaucratization must be done carefully to avoid the practice of crime.

Bottini pointed out that in this context, special attention is needed to cryptocurrency exchanges, which are often the criminals’ gateway to the financial system.

“It’s a dynamic market, which is growing, and the authorities don’t want to freeze it, but I think the legislation needs to focus on it.”

jump the wall of our house

The executive director of Bradesco, Moacir Nachbar Junior, who also ‘picked up’ the cryptocurrency and fintech companies in general, said that these companies would be the weakest link in the system and, therefore, would not have sufficient protection to avoid their use by criminals.

“The point is that the criminal enters the house without protection and then can jump over the side wall and come to our house”, he pointed out, pointing out that it is necessary to unite everyone, banks and fintechs, for the security issue.

Matias Granata, member director of the executive committee of Itaú Unibanco, said that it is necessary to act quickly because the actions to digitize the economy, including the PIX, are making life easier for criminals and putting the entire national economic system at risk.

“Digitization and competition are welcome, but we’re putting at risk all the robustness of the system we’ve built over the past five years if we don’t close the loop.”

Ana Paula Teixeira de Sousa, vice president of internal controls and risk management at Banco do Brasil, also targeted her criticisms of the cryptocurrency market, pointing out that crypto-actives represent an additional challenge in the fight against money laundering.

“Digital currencies, with their difficulty to track, bring additional challenges,” he added.

Banks and non-cryptocurrencies are the most used

However, while the executives of the country’s main banks have criticized the use of cryptocurrencies in money laundering schemes, several studies have already pointed out that banks are the main laundry facilities for organized crime.

A recent survey by Mexico’s Financial Intelligence Unit revealed that the group called the “G7 of banks” – with BBVA, Santander, Citibanamex, Banorte, HSBC, Scotiabank and Inbursa – registers more money laundering in Mexico than all other companies in Mexico. cryptocurrencies and blockchain added together.

In Brazil, both Itaú, Banco do Brasil and Bradesco are accused of helping account holders receive more than R$ 1 billion in bribes, according to an investigation by Lava Jato.

“What is being investigated is whether the bank took all the necessary precautions to prevent employees from being co-opted and values ​​being laundered, or if it was silent,” said Federal Attorney Roberson Pozzobon, a member of the Lava Jato task force in Curitiba

According to investigations by the Public Ministry, within the Lava Jato operation, the banks allowed the opening of checking accounts in the name of shell companies and companies operated by money changers

In total, the banks would have ‘made viable’ around R$ 1.3 billion in allegedly illicit receipts in some cases through the co-option of bank employees and failures in systems to control suspicious transactions.

Although they criticize the cryptoactives market and, in particular, the cryptocurrency exchanges, some of the main national banks such as Itaú and Banco do Brasil have embraced the Bitcoin (BTC) market and even offer investments in cryptoactives to their clients.

Both banks helped coordinate some of Hashdex’s ETF offerings such as HASH11, which invests in a basket of cryptocurrencies; BITH11, which invests 100% in Bitcoin and ETHE11, which is the 100% Ethereum (ETH) product and which recently debuted at B3.

Due to this ‘hit and blow’ position, banks respond to an administrative proceeding at the Administrative Council for Economic Defense (CADE) in which they are accused of practices aimed at preventing competition by limiting access to the financial system for Bitcoin companies, such as exchanges .

In the process, which has lasted more than 2 years, banks claim, among others, that they do not have any share in the cryptocurrency market and that cryptocurrency companies do not need to use banks to receive and transfer money.

Itaú has even confirmed that it does not open bank accounts for a cryptocurrency company as it understands that the activity can be used for money laundering.

“This is because, although Itaú Unibanco chooses not to serve cryptocurrency brokers, as it understands that virtual currencies that can be exchanged for real money or other virtual currencies are potentially vulnerable to money laundering and terrorist financing, there are several other interested banks in meeting them and, therefore, their activities can continue without any harm”

However, as shown in a recent document sent to CADE by the Brazilian Association of Cryptoeconomics and Blockchain (ABCB) while beating the cryptocurrency market and closing companies’ access to the financial system, Itaú brags about Bitcoin on social networks by selling products from investment in cryptoactives. 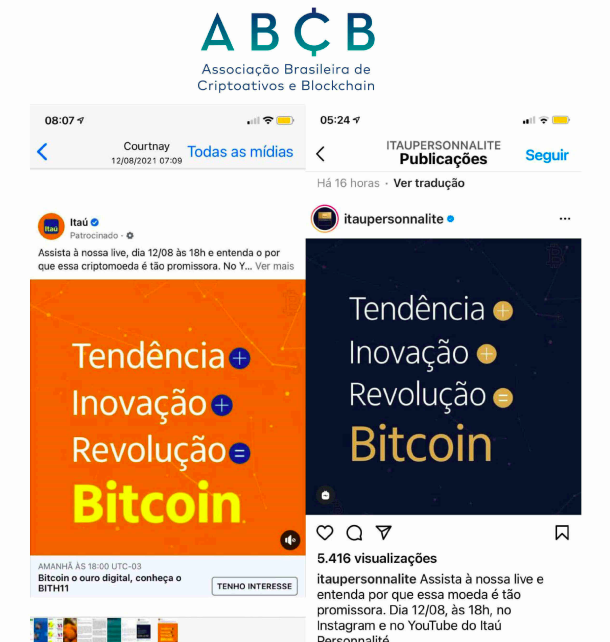