A recent prediction by Ming-Chi Kuo has tech fans excited about the new possibilities of the upcoming lineup of iPhones. We’re talking about the feature that promises satellite communication, something that should become the next big trend, seeing as Qualcomm is already working on this type of communication for their next modems as well.

However, apparently, the revolutionary feature will debut with one big limitation — can only be used for emergencies. The information was published in a recent Bloomberg article.

Initially it was believed that the satellite connection could be a great communication alternative for those who live in regions where the cell signal is weak, however, apparently Apple will only exploit the resource in extreme situations.

The communication will, in fact, allow the sending of messages via satellite, however, it will be integrated with iMessage via SMS as a third protocol — in addition to SMS (green balloon) and iMessages (blue balloon).

The message would be displayed as a gray balloon, used to report emergencies such as plane crashes, sinking ships, and other such situations, all using satellite communication.

While such a feature is expected for future generations of the iPhone, it’s unlikely to be available anytime soon — Bloomberg points out that the funds could even be cut from Apple’s plans at worst.

With the release of the iPhone 13 (or 12s) series slated for the next few weeks, rumors of the upcoming apple cellphones continue to surface on the web — and the latest, by the way, comes from none other than Ming- Chi Kuo.

The popular analyst shared in one of his notes that the devices should incorporate support for calls and SMS via LEO satellites (low-Earth-orbit), allowing users to use these services when there is no cellular signal available.

Previous rumors suggest that upcoming iPhones are likely to bring mmWave technology to more markets, and it appears Apple will continue its partnership with Qualcomm, shipping a modified version of the X60 chipset with support for LEO satellites.

This type of satellite is, for example, the one used in Elon Musk’s Starlink service, which recently hit 100,000 units sold. But Apple’s partners in using the technology will likely be Globalstar’s satellites.

However, despite the great news, everything indicates that for the technology to work, operators will need to make agreements with Globalstar to offer the service. And the chances that we are facing a new trend are great.

That’s because Qualcomm is supposedly negotiating with Globalstar to include the technology in question in upcoming X65 5G modems — that is, the chances of the feature also landing on top-of-the-line Android phones are great.

Satellite communication support is expected to be expanded to other Apple products such as its upcoming AR headset (corroborated with Apple Glasses), the Apple Car, and several others in the IoT area, but inclusion in the iPhone series should be the initial step.

The new generation of smartphones from Apple should arrive soon, in the month of September. But while this official launch does not take place, rumors about what will be new in the iPhone 13 line do not stop circulating on the internet. Even with the possibility of being cheaper, the iPhone 13 can come with a ProMotion screen, improved fast charging and a bigger battery.

Incidentally, the assumption that the Cupertino Giant intends to invest in hardware improvements, including the battery, of the iPhone 13s has just been reinforced by a report by TrendForce.

Apparently, the new series should feature an A15 5 nm+ chip, for more speed and efficiency, support for 5G and more space in internal circuits to house a larger battery. The iPhone 13 Pro Max should feature a 4,352 mAh battery, an increase of 665 mAh compared to the 3,687 mAh of the iPhone 12 Pro Max.

Apple has been looking to lengthen the iPhone 13’s supply and production chain to avoid the effects of the hardware crisis. Experts point out that the brand will see sales growth in this second half of the year with the launch, even though the scenario does not look so promising — more than 50% of iPhone users do not intend to migrate to the new generation. 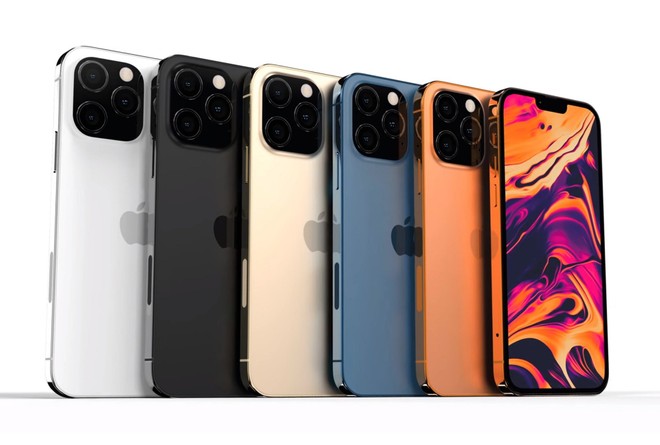 iPhone 13 with bigger battery?! Possible specs are revealed by leaker

We’ve already seen some rumors indicating that Apple should finally pay more attention to an extremely important component in the iPhone: the battery. The new strategy would involve rethinking the space devoted to the internal component and other details like the Face ID notch, and today we have new information on the specifications of these batteries for all new models.

The specs come from Twitter’s leaker @L0vetodream, who shared images found on Weibo, citing the capacities of batteries that should belong to new iPhone models.

Simplifying a little more, let’s compare battery size between the current generation and the iPhone 13:

One of the biggest leaps should be seen mainly on the iPhone 13 Pro Max, where we will have a 665mAh increase over the iPhone 12 Pro Max.

However, it is necessary to ponder, as Apple itself has not yet revealed its new devices, which should be released in September, but it is interesting to at least dream of a longer battery life on iPhones, after all recently the update to iOS 14.6 caused excessive drain of battery in these devices, which is being reported by several users.

Ming-Chi Kuo is back with yet another prediction, reiterating one of several he made a few weeks ago about Apple’s upcoming line of smartphones, which we still don’t know if it will be called the iPhone 13 or iPhone 12S.

In his latest report, he comments on changes in the positioning of the internal components for the devices, with the aim of shipping batteries with greater capacity than those present in the iPhone 12 line.

It’s still unclear how the Cupertino giant will do to include these larger modules, however, according to Kuo one of the changes would be related not only to the SIM card slot but also changes to the front camera module.

Everything indicates that the slot will now be integrated directly into the motherboard, making it thinner than previous iPhone models.

One of the side effects of the larger battery will undoubtedly be a slight increase in the weight of the devices, but possibly the user won’t be bothered, seeing that he can spend more hours away from the sockets – seems like a fair trade-off, right?

The next generation of iPhones (at least on Pro models) should include LTPO panels with variable refresh rates, further benefiting battery life.

The extra attention to batteries is something natural in this upcoming generation of laptops from Apple, after all, the iPhone 12 line has been criticized for bringing lower autonomy to the iPhone 11, especially because of the 5G.

Also regarding the changes in the internal components, regarding the front camera, naturally, a change in the modules should end up benefiting users with a reduction in notch, something that has also been mentioned in previous rumors.

Ming-Chi Kuo shared several predictions about upcoming Apple projects in the past few hours – he talked about the next generation iPhone SE, about the folding iPhone and also, of course, about upcoming models for this year.

According to the analyst, the iPhone 13 (or iPhone 12s) line – which could finally gain 1 TB of storage – should hit the market with a design similar to the models launched in 2020, however, with some interesting additions.

iPhones released in 2021 are also expected to reduce the size of the infamous notch and increase the size of the batteries, news that should be very well received by fans of the Apple cell phone line.

Lastly, Kuo also talks about 5G support with Qualcomm X60 modem in all models and the absence of USB-C, which indicates that Apple should maintain lightning connectivity in the next generation as well.

Interestingly, he doesn’t mention anything about the Touch ID’s return or the possibility of a portless iPhone, suggesting that this might be Apple’s plans for 2022 onwards.

Speaking of 2022, Kuo finalizes his prediction by reinforcing that next year some iPhone models will leave the notch aside and embrace the hole-shaped camera, as we already have in several Android phones.