It’s a little while before we have the official iPhone 13 information with the event on September 14th. Still, there are already substantial rumors and information about Apple’s next generation smartphone.

According to a leak released by the Front Page Tech portal — which gathered a lot of inside information and sought to translate it into 3D renders — Apple is getting rid of the nick with the launch of the iPhone 14, something analyst Ming-Chi Kuo predicted in the early this year, although he said that the giant may bring change only to some of the models.

According to Jon Prosser, from the FPT, the array of Face ID cameras will be found under the screen, while the real sensor responsible for capturing images and video will be visible in the form of a hole.

Apple is probably going this route and not for an on-screen solution, because it knows that current-gen technology seriously degrades image quality. However, Kuo predicted that on-screen facial identification and a periscopic camera system could become a reality by 2023 — which this particular leak fails to confirm.

In addition to the change in front, the iPhone 14 also features a titanium chassis, but it looks like this premium look will be reserved for the more expensive variants. Changing materials of construction make the iPhone 14 Pro and iPhone 14 Pro Max more durable and less prone to scratches. The volume buttons have a rounded shape, similar to the buttons on the iPhone 4 and iPhone 5.

Apple also introduced redesigned speaker grills, and could get rid of the camera’s impact, with all the lenses aligned with the back of the phone. If you want to check the original video with all the details, you can access it by clicking here.

So, what did you think of this new proposal? Leave your impressions!

After a patent for periscopic cameras was discovered in July with Apple’s signature, new information reinforces that future big tech cell phones will be equipped with powerful lenses, such that they will bring a dramatic increase in zoom capability iPhone 14 Pro Max, according to Ming-Chi Kuo, a well-known analyst in the industry.

The new technology should ensure that future smartphones in the iPhone 14 line — scheduled to be launched in 2022 — undergo significant changes in their design, aiming to support the new lens arrangement.

Alongside Kuo’s new information, more company patents were seen in the US Patent and Trademark Office, the US regulatory body that manages intellectual property. O Patently Apple released a familiar sketch detailing the construction of the iPhone 14 Pro Max’s internal periscopic camera module. 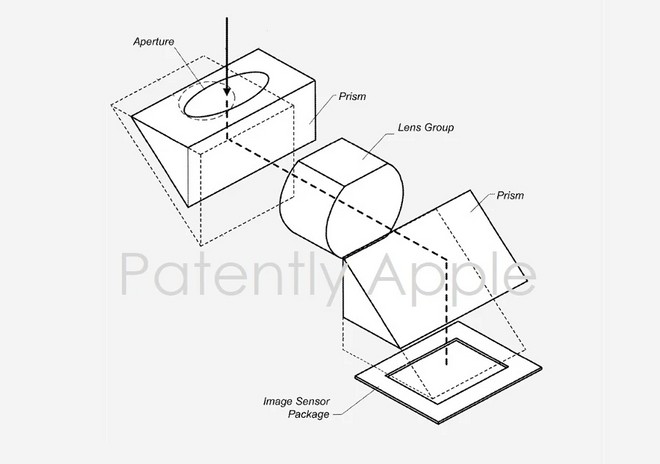 According to the portal, at least 53 documents relating to the matter were published by the office last Tuesday (17). It’s worth noting that some of the patents not only cover the iPhone, but may also describe the periscope magnification technology for Apple Glasses, AR/VR glasses also slated for 2022.

Apple has been developing a new periscopic camera system for the iPhone for years, aiming to reduce the physical space that lenses take up inside and outside devices and mitigate the risk of accidental damage without compromising their photographic performance.

A new patent filed with the US regulatory agency indicates that this technology is close to its debut. According to a document from the US Patent and Trademark Office, the Giant of Cupertino developed its own periscopic camera solution, and should unveil this new system in the coming years. 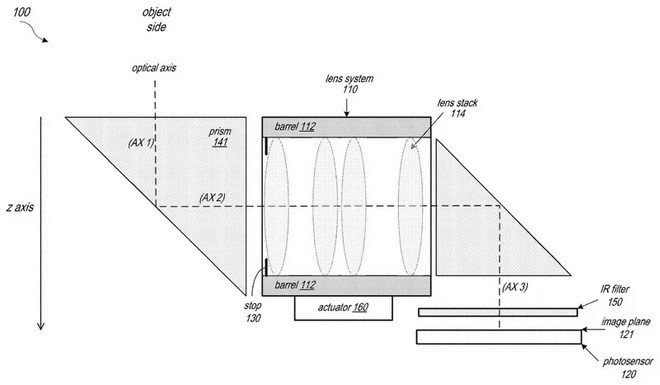 The patent is entitled a “folded camera” and, according to the sketches, is befitting a periscopic module, including two prisms and a set of independent lenses located between them. These lenses can be freely moved to integrate features like optical stabilization and autofocus.

Technology will allow a dramatic increase in zoom capability of iPhones, which are currently limited to up to 2.5x, equipped on the iPhone 12 Pro Max. Periscopic systems currently offer up to 10x optical zoom lenses, such as the Huawei P40 Pro Plus and the Galaxy S21 Ultra.

Devices are expected to bear this technology for years to come. Ming-Chi Kuo, an analyst with trusted sources at Apple, had indicated that the first iPhones with a periscopic camera would be announced in 2022, but changed his forecast for the year 2023. Other insider information, however, still suggests its debut in the year next.

Regardless of the availability date, the patent indicates that big tech was finally able to develop a solution that did not infringe on the intellectual property rights of other companies, which is why its production was limited to current technology. With that, it is expected that the iPhone 14 or iPhone 15 will retire the great relief of the lenses.