The world’s largest telescope, James Webb, will be launched shortly by NASA, the United States Space Agency (USA). All tests have been completed and the observatory will only have to prepare to go into space on December 18 this year. The goal of the new telescope is ambitious: to collect data so that humanity can discover the origins of the Universe.

James Webb, who is currently in final preparation for parts shipment in California, USA, will be the lead agent for deep space studies for the next decade. The launch of the telescope into space will take place at the European aerospace port located in French Guiana.

NASA, which successfully managed to overcome the difficulties encountered — and aggravated by the coronavirus pandemic — during the development of the project, reaffirms the observatory’s objectives:

Revolutionary Webb telescope technology will explore every stage of cosmic history—from within our solar system to the most distant observable galaxies in the early universe and everything in between. Webb will reveal new and unexpected discoveries, and help humanity understand the origins of the universe and our place in it. 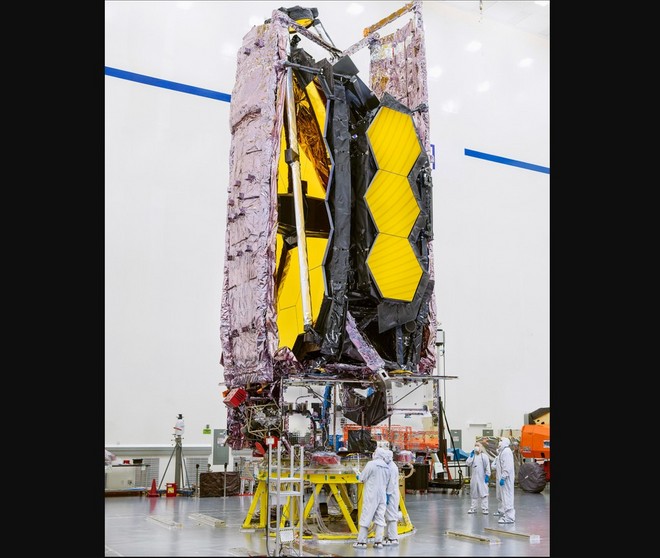 The James Webb Space Telescope (JWST) is a large infrared telescope with a main mirror of no less than 6.5 meters. To protect mirrors and sensors from the extreme temperatures of space, there will be a characteristic sunscreen that, once deployed, measures 21×14 meters.

The observatory’s final destination is 1.5 million kilometers from Earth—a distance four times that of the Moon. Only then will the JWST be able to get a clear infrared view from space. By way of comparison, the Hubble telescope orbits “only” 550 kilometers above our planet.

NASA will launch the world’s largest telescope, James Webb, to discover origins of the Universe

As the Perseverance rover unravels the history of one of the most enigmatic areas of Mars, the Crater of Jezero, and captures numerous images and even audio of the atmosphere, the US National Aeronautics and Space Administration (NASA) prepares to launch in the space the largest and most powerful telescope in the world.

This is the James Webb Space Telescope. The telescope’s main mirror is composed of 18 hexagonal segments coated with an ultra-thin layer of gold to enhance infrared light reflection.

The current premium NASA Hubble telescope, despite having already recorded incredible images from space, has a limited ability to capture infrared light, which hinders the study of some key points about the Universe, such as the discovery of exoplanets.

The James Webb will fly into space folded like an origami, fitted to the rocket’s payload, and then use 132 actuators and motors to deploy each mirror into a specific position. Together, the mirrors will act as a massive reflector that will allow an even deeper view of the cosmos in a way never before done.

With the new telescope, scientists plan to find out more about the Universe 13.5 billion years ago, checking for the first time how the first stars and galaxies formed, a few hundred million years after the Big Bang.

The ability to capture infrared light is essential for this, because by the time the light from the first objects hits ground-based telescopes, the shift to the red end of the magnetic spectrum has already taken place. This happens because of the widening of the space between objects as the Universe expands.

Another area of ​​study that is of great interest to scientists is the discovery of alien worlds. The first exoplanets were identified in the 1990s and currently there are more than 4,000 found. Webb has the tools to improve this “hunt” for unknown planets.

Researchers from 44 countries will be able to use the new telescope with proposals that include using infrared light-gathering capabilities to penetrate supermassive black holes at the centers of galaxies, including the Milky Way. Eric Smith, project scientist James Webb, reaffirms the telescope’s extraordinary capacity:

Webb’s discoverability is limited only by our own imagination, and scientists around the world will soon be using this general-purpose observatory to take us to places we never dreamed of going before.

NASA has already operated the latest tests of the $10 billion observatory to see if the telescope will survive the 1.6-million-kilometer journey to search for the origins of the Universe. The James Webb is expected to be launched on October 31, 2021, in French Guiana, in an Ariane 5 rocket.

Are you interested in space science? What are your expectations for the discoveries to come with James Webb?