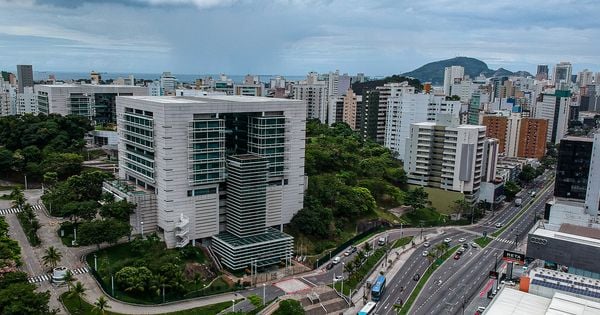 President Jair Bolsonaro has criticized Petrobras for the high cost of renting the land where the company’s headquarters are located in Vitória. During live on Thursday (7), he said that the monthly expense is R$ 1.7 million and linked the issue to the rise in fuel prices.

Bolsonaro also stated that it would not be possible to sell the headquarters, which, according to him, is underutilized, because the owner of the land would have no interest and compared him to a “payment loan”.

“There in Vitória there is a huge Petrobras building. A wonderful building that has a large part of its capacity idle. A very expensive project, which came out for twice the price and has not yet paid for the entire work”

The president continued: “But in detail, despite being the work of Petrobras and costing twice the scheduled price, Petrobras still pays R$1.7 million in rent per month. But why is that? Land lease. millionaire work on a rented land”.

Inaugurated in 2012, the building, which is located in a prime area, on the banks of the Reta da Penha, cost approximately R$ 567 million, six times more than initially planned.

The construction was carried out on a plot of 83,400 m², which since 1982 has belonged to Emescam. Since then, a rent defined in the contract, which is valid for 45 years, has been paid.

is the term of the lease agreement between Petrobras and Emescam

This is not the first time the president has quoted in a reproachful tone the rent paid by the oil company for the land in Vitória. In the live on September 29th, he also spoke about the subject, associating it once again with the rise in fuel prices.

“The monthly rent on prime land, like Leblon, in Rio de Janeiro, is R$1.7 million. What happened in the past contributes to the price of fuel here at the end of the line.”

BARREL PRICE AND HIGH DOLLAR ARE RESPONSIBLE FOR THE FUEL PRICE

According to economist and professor at Fucape Felipe Storch, although the company’s management in the past may be a reason for criticism, it is not the cause of the rise in fuel prices in Brazil.

“This (high costs) affects Petrobras, of course, but it is not the cause of the high fuel price. What the president has been doing with the issue of ICMS and with the issue of the cost of renting the Petrobras building is a distraction, so as not to deal with the much bigger problem, which is the exchange rate problem,” he says.

He explains that the price of a barrel of oil, as well as other commodities, is high, which affects the whole world. However, the product is quoted in dollars and the American currency is also more expensive in relation to the real.

“The rise in the barrel of oil could be offset by the fall in the exchange rate. One thing would oppose the other and there would not be this pressure on fuel prices that we are having”, he explains.

THE Petrobras was asked twice by The Gazette this week, but in both he replied that he would not comment on the matter. See questions made that were left unanswered at the end of the article.

THE PRESIDENT ALREADY TALKED ABOUT SELLING A BUILDING

In an interview with Rádio Jovem Pan on September 27, the president, also citing the lease of land for Petrobras’ headquarters in Vitória, said that the building could be sold. However, on Thursday (7), he said that this would not be possible because the owner of the land, in this case, Emescam, would not accept it. Then he compared him to a “loan shark”.

According to the Irmandade da Santa Casa de Misericórdia de Vitória (ISCMV), the contract for the Concession of Right to Use the Surface in question was signed between the Brotherhood and Petrobras in 2006, valid for 45 years with the possibility of being renewed for more 25.

“At the time, the value of the concession was fixed based on an appraisal of the land carried out by experts and passed through the Judiciary Branch. Today, the monthly amount paid by Petrobras to the Brotherhood is R$1,691,959.50”, he said in a note.

The organization stressed that the contract was by consensus between the parties and that it can consider the sale once the current term ends.

“After the term of the contract, it can be sold to Petrobras, if there is interest. There is no loan shark or anything like that. The money is all destined for the Brotherhood, which maintains two hospitals with open doors, with more than 90% of their services directed to the Unified Health System (SUS).”

THE CONTROVERSIES OF PETROBRAS HEADQUARTERS IN ES

Starting with the curve that it imposed on the road, renowned for being a straight line. The Nossa Senhora da Penha avenue, the famous Reta da Penha, gained a meandering path to facilitate access and exit from the building.

The pharaonic construction has greenish panes that came from Belgium and cost approximately R$ 12 million. To combine the imported glass, Italian shutters were ordered with technology to close automatically.

The expense to get the building off the ground is a separate chapter in the history of Petrobras headquarters. The Federal Court of Accounts (TCU) made the accounts. When the structure was just a plan, the state-owned company expected to spend R$90 million. When the bid was launched, the price was R$436.6 million. But the work was contracted for R$ 486.1 million. After several amendments, the final price was R$567.4 million. That is, 6.3 times more than the initial.

If you’ve noticed any incorrect information in our content, click the button and let us know so we can correct it as soon as possible.