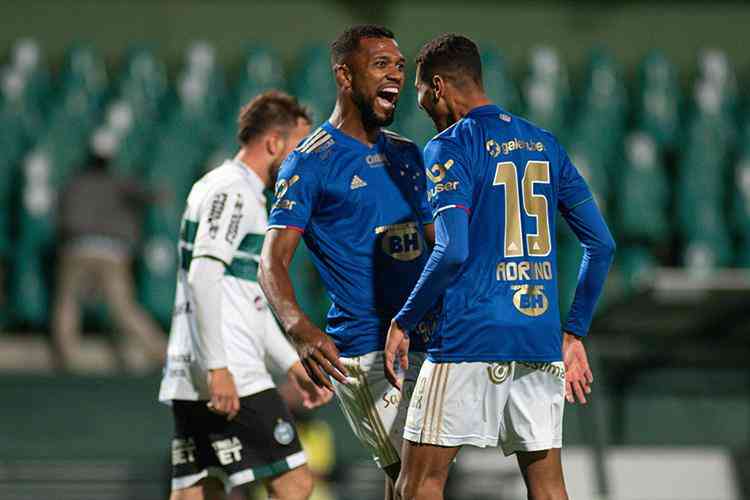 For many months, Cruzeiro fans have not lived such a special night as this Friday. In the middle of Couto Pereira, in front of leader Coritiba, Vanderlei Luxemburgo’s team thrashed 3-0, after an overwhelming start, and guaranteed the victory for the 29th round of the Series B of the Brazilian Championship. Giovanni, Adriano and Eduardo Brock rocked the net. Fbio also defended a penalty in the final stage.

With this result, Cruzeiro takes 11th place in the table, reaches 38 points and opens eight points in relation to Londrina, which occupies 17th place. The people from Paraná enter the field this Saturday, at 4:30 pm, in front of Guarani, at Brinco de Ouro, in Campinas-SP.

In the next round, Cruzeiro returns to Belo Horizonte, where it hosts Botafogo, on Tuesday (12/10), at 9:30 pm, at Independencia. Raposa partners can now purchase tickets for the duel between Brazilian champions. Coxa, in turn, goes to So Janurio, in Rio de Janeiro, to measure his strength with Vasco. The departure is scheduled for 4:30 pm on Saturday (16/10).


Overwhelming, Cruzeiro opened the scoring and expanded even before the 10′. As soon as 2′, Adriano recovered the ball in the intermediate, played for Vitor Leque, who served Giovanni inside the area. In a beautiful finish, the midfielder enforced the ‘law of the former’ to overcome Wilson and score:

Five minutes later, it was Vitor Leque’s turn, in another assist, to let Adriano face the goal. The defensive midfielder started the move, with a disarm in midfield, and appeared as a surprise factor in the area after the play. He received it from the right and shook the net for the first time with the Cruzeiro shirt:

The initial stage, at a good technical level, still reserved other dangers, especially for the visitors, who surprised Coritiba with an aggressive strategy. At 18′, Thiago received a shot from Giovanni, beat Luciano Castn, hit cross and almost surprised Wilson. The ball scraped the left post of Coritiba.

In the same accelerated way that ended the initial 45 minutes, Paraná and Minas Gerais returned from the break willing to compete. ahead on the scoreboard, Cruzeiro gave more field to Coritiba and tried to come out on the counterattack. At the moment when the game was worst, Vanderlei Luxemburgo’s team scored once again. On 15′, Giovanni took a corner kick, Eduardo Brock climbed higher and headed without a chance for Wilson:

The night proved to be so favorable to Cruzeiro that, on 22′, Fbio also saved a penalty from striker Leo Gamalho, a former executioner of Raposa. After the duel, the owners of the house felt the weight of the scoreboard and could not build danger. Raposa, in turn, closed with the entries of defender Lo Santos and defensive midfielder Ariel Cabral to ensure the important victory away from home.

Coritiba x Cruzeiro: game photos for the 29th round of Serie B


There is no description for this image or gallery

29th round of the Series B of the Brazilian Championship