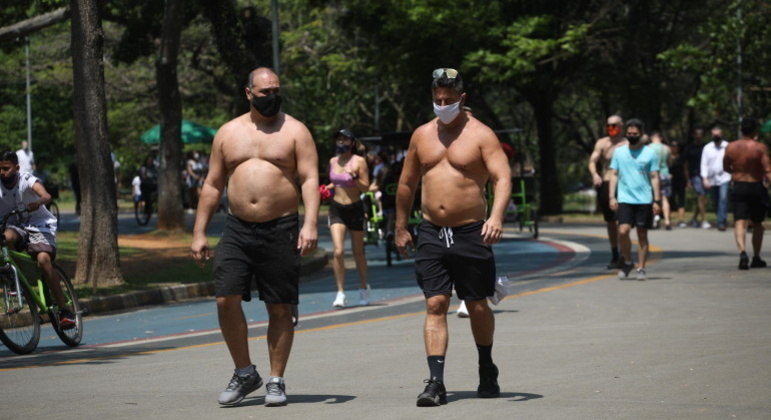 Common sense tends to look at thinness as a sign of health and obesity as a symptom of illness. But a study published in iScience scientific journal, in September, indicates that physical activities are the most suitable regulators to assess whether a person is healthy, with less risk of getting cardiovascular disease, problems with blood pressure and even diabetes, and, consequently, having a longer life.

For the endocrinologist, Maria Edna de Melo, president of the obesity department at SBEM (Brazilian Society of Endocrinology and Metabolism), the need for regular physical activity is indisputable.

“It’s what we call a polypill, it improves physical and mental health. The benefits, regardless of the weight issue, are numerous. It reduces mortality, improves anxiety, depression, improves even our eating behavior. And the benefits are short, medium and long term”, emphasizes the doctor.

And she adds: “there are studies that show that people who are underweight, without visceral fat, but who are not in good physical condition, have a high mortality rate. Physical activity ends up reducing the risk of disease,” she points out.

In the case of obese people, good physical conditioning and frequency of activities are even more indicated than weight loss alone, the study pointed out.
Scientists at the University of Arizona and Virginia, both in the United States, analyzed research already done on weight loss and exercise in men and women and found that overweight people usually reduce the risk of heart disease and premature death much more by gaining physical shape , than decreasing the number on the scale or dieting.

By looking at more than 200 works done and published, researchers found that obese and sedentary men and women reduce the risk of premature death by 30% or more, as soon as they begin to exercise and improve their physical fitness, regardless of weight loss.

“People think: I’ve been walking all week for an hour and I haven’t lost any weight. Nor will you, because the expense on walking is very low and it’s still not everything we expect. So, it’s important to be aware of what we expect. physical activity will bring it. She didn’t lose weight, but slept better, anxiety was more controlled,” says Edna.

Already, in cases of obese who lost weight with diets, the risk of death drops by about 16% in some surveys and in others, mortality does not even decrease. “Many obesity-related health conditions are more attributable to low levels of activity and fitness than to obesity itself. Good fitness and frequent exercise significantly decrease, and sometimes eliminate, the increased risk of mortality associated with obesity In addition to being associated with a greater reduction in all-cause risk and mortality from cardiovascular disease than intentional weight loss,” the researchers explained in the publication.

Scientists make it clear that the findings do not mean that obesity is not a health problem. They propose a change in the treatment of the disease, which is considered a pandemic by the WHO (Health Organization).

The suggestion is that the solution is not focused only on weight loss and on reaching the numbers considered ideal by the BMI (body mass index) for a person to be considered thin, overweight or obese.

“A weight-neutral approach can be as effective or more effective than a weight-loss-centered approach and can avoid pitfalls associated with repeated weight loss failure. The strategy is to shift the focus from weight loss to increased physical activity and improvement in cardiorespiratory fitness,” the authors wrote.

The endocrinologist understands that, increasingly, the treatment of obesity has become clear about the need to improve health and not simply lose weight. “The goal is to be fine, not to lose weight. The weight considered ideal for BMI, for some age groups, is unattainable. When a person who has a BMI of 60 and reaches 40, he is doing very well, even though he is considered a degree obesity 3”, explains Maria Edna.

Frequent physical activity serves as allies to improve the health condition, even if some people criticize it for making people more hungry, as explained by the doctor.

“There are people who speak ill of exercise, because we feel very hungry after the activity. Yes, we will be more hungry because we used more energy. Even so, there are studies that show that we eat a little more, but considering what we spend, we continue with caloric deficit. So, it’s always worth it,” concludes Maria Edna Melo.