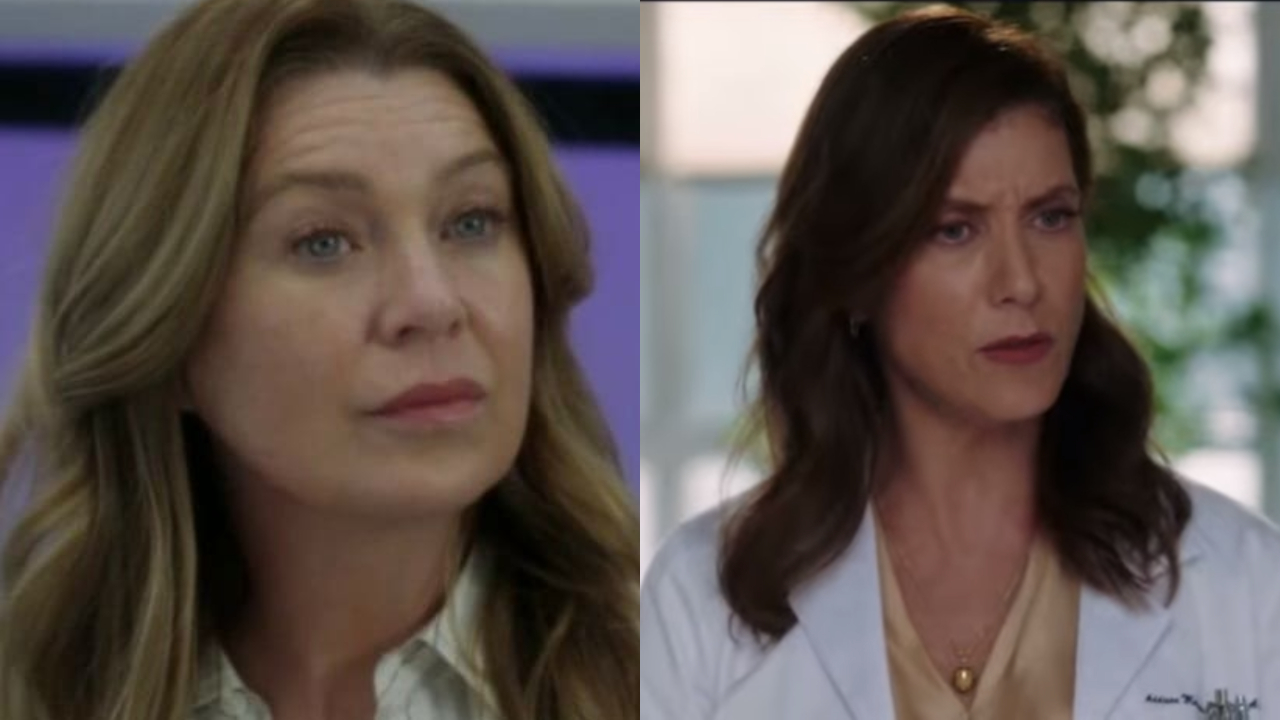 The 18th season of ‘Grey’s Anatomy’ has arrived to shake the fans’ emotions once and for all! That’s because, right in the second episode, Meredith Gray (Ellen Pompeo) took everyone by surprise by revealing the possibility of leaving the Gray Sloan Memorial Hospital. HI?!?! It all started with David Hamilton (Peter Gallagher) shoving a note under the door of Mer’s Minnesota hotel room.

In the first episode, the surgeon took the protagonist to visit the “Grey Center for Medical Research” – a place he would give to the surgeon if she accepted the proposal to help him with research on Parkinson, inspired by the work of his mother, Ellis Gray ( Kate Burton). The invitation seemed to captivate Mer, but so far, the blonde still hadn’t given her an answer. In the second episode, Hamilton calls the surgeon to dinner, as a last attempt to convince her.

Meanwhile, Gray remained uncertain about the matter and ended up enlisting the help of his former sister-in-law, Amelia Shepherd (Caterina Scorsone), to help her with the choice. The neurosurgeon then travels to Minnesota to visit the laboratory that was being offered to Mer. “Oh, you’re definitely not going back to Seattle.” said Shepherd. At this point, yet another twist took fans by surprise – the lab as well as the millions that research dollars weren’t just being offered to Mer right now. The “Grey Center for Medical Research” was also interested in hiring Amelia, at the suggestion of the protagonist herself. OMG!

In Seattle, the situation for the residents of Gray Sloan Memorial Hospital was getting worse. Richard (James Pickens Jr.), however, had big plans for them all. The hospital director gathered his pupils and announced that they would undergo a series of rigorous surgical simulations and evaluations. “The resident with the highest score flies alone to the emergency room“he said, offering students the chance to perform an operation equivalent to their abilities. The competition left everyone in an uproar and recalled, in part, the first episodes of the series.

Back in Minnesota, Amelia looked over at David, who wasn’t interested in a Band-Aid for his Parkinson’s, just something that would make him “come whole again.” Soon, even with many uncertainties hanging over her relationship with Link (Chris Carmack), an atmosphere of romance has set in between Amelia and Hamilton’s brilliant colleague Dr. Kai Bartley (ER Fightmaster), who is a non-binary person. Twitter fans went wild to see this new career opportunity for the neurosurgeon and the possibility of a queer relationship in Amelia’s future. It will be rolling?

EVERYONE SHUT UP RN #GreysAnatomy pic.twitter.com/HcD6GUelw2

Mer and his sister-in-law then went back to discussing the proposal made to the blonde. Amelia, in turn, stated that there was no decision to be made – that’s because, in her opinion, Gray should say yes and finally find a cure for Parkinson’s disease. Meredith, however, was reluctant, but the little Scout’s mother stood her ground. “You’re being ridiculous because you haven’t accepted the offer yet”, said the brunette, reinforcing that this was Mer’s chance to go back to neurosurgery.

In the final scenes of the episode, Meredith shows up for her date with Nick Marsh (Scott Speedman), who takes her on a picnic in the woods. The romantic atmosphere between the two made the protagonist of the medical drama feel safe enough to admit that she was afraid to say yes to David’s proposal and then fail. “I have a very comfortable situation in Seattle”, she stated. “You are not a security person. You’re going to risk everything and win or lose, it’s going to be hell”, Nick suggested, leaving Mer beyond thoughtful.

The doctor then made some demands of David, including moving the entire project to Gray Sloan. When this order was dropped, she offered an alternative: “I could set up a satellite lab in Seattle and go back and forth once a week.” Hamilton accepted and the answer then sealed Mer’s fate. My God, what’s next?

Back in Seattle, another hospital staff casualty has left Bailey (Chandra Wilson) worried, as has the lack of unity among residents, who are increasingly mired in medical procedures. The doctor then told her colleague, Richard, that everyone at Gray Sloan needed to feel that they were a team once again.

“You want people to remember why [são uma equipe]“, punctuated the director, before thinking of a brilliant solution to the hospital’s problems – that’s it, the iconic Addison Montgomery. OMG!

In the teaser shown after the episode, ABC showed a snippet of the return of the neonatal surgeon. Rumors that an important figure is visiting the hospital spread among the young doctors, who are beyond curious and apprehensive.

Then, just like the first time he landed in Seattle, Addison (Kate Walsh) arrives at the scene with both feet in the door. “I am Dr. Addison Montgomery. And you must be the group that is destroying the residency program?”, she questioned. The speech is a direct reference to the first meeting between the redhead and Meredith, in the 1st season of the medical drama. Hallelujah, I shivered! Just spy: