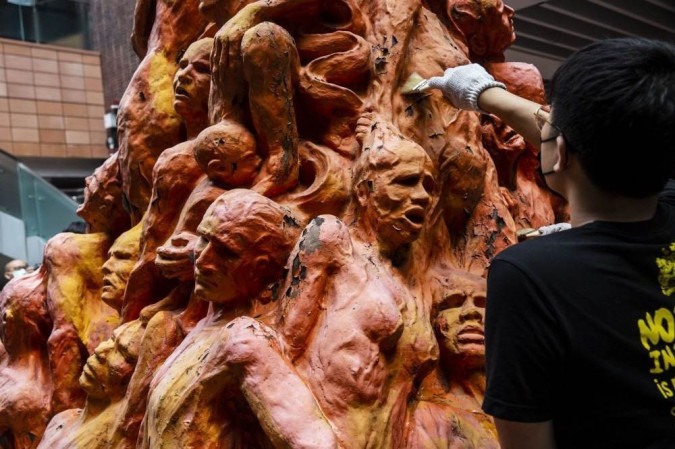 Hong Kong’s oldest university ordered the removal of a statue honoring protesters killed in the 1989 Tiananmen Square crackdown, according to a legal letter published on Friday.

The eight-metre-tall copper statue was the centerpiece of the candlelit vigil held in Hong Kong on June 4 to honor the dead, when Chinese troops, supported by tanks, opened fire on unarmed protesters in favor of democracy in Beijing.

The statue shows 50 anguished faces and bodies piled on top of one another, and has been on display at the university for more than two decades.

The decision was criticized by the work’s Danish sculptor, Jens Galschiot, who told AFP that his withdrawal illustrated the current purge of dissent in the once semi-autonomous business center.

In a legal letter addressed to the now-dissolved Hong Kong Alliance (HKA) – organizer of the grand annual Tiananmen vigil – the University of Hong Kong demanded the group “immediately take the necessary steps to remove the sculpture from the university premises”. before 09:00 GMT (06:00 GMT) on October 13th.

“If they don’t remove the sculpture, it will be considered abandoned”, the letter states, indicating that, in that case, the university would take care of the statue in the way it deems appropriate, without further details.

Richard Tsoi, a former member of the HKA standing committee, said the request was “unreasonable” and sent a request to the HKU dean to keep the statue. “As a space with freedom of expression and academic freedom, the University of Hong Kong has a social responsibility and mission to preserve the ‘Pillar of Shame,'” Tsoi said in a statement.

In an e-mailed response to AFP on Monday, statue creator Jens Galschiot said he was “surprised that the only monument honoring such an important event in China’s history will be desecrated.”

“I want it to remain in Hong Kong, where it is today. That would be historically correct. It is an important work of art that has a historical link with Hong Kong and should remain on Chinese soil,” Galschiot said.

HKU did not respond to AFP’s questions about the order to remove the statue.