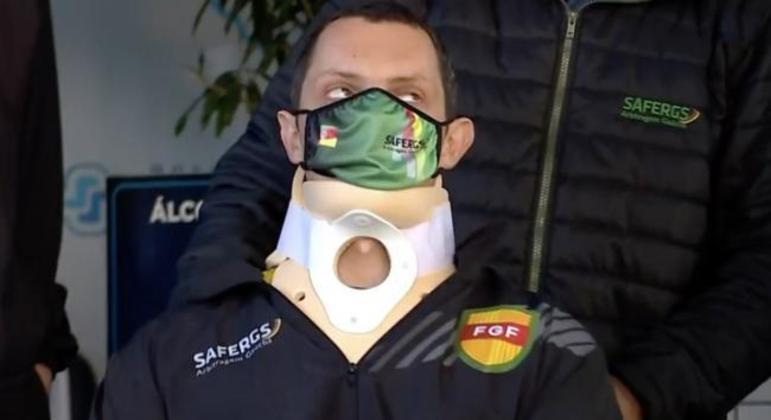 “The athlete of the Sport Club São Paulo team, Mr. Willian Cavalheiro Ribeiro, nº 10, after being warned with a yellow card, at 14 (fourteen) minutes of the second half, for complaining in an insane manner about not marking a foul in favor of his team, he immediately ran towards referee Rodrigo Crivellaro.

“He threw a frontal punch in the face region, causing cuts and bleeding in the nose and mouth, causing him to fall on the lawn.

“In a continuous act, he landed a violent kick in the back of the referee’s head, without any possibility of defense, causing a trace of fracture in the thorny process of C6, leaving him unconscious.”

Even in the coldness of the language of a football summary, one can see the savagery suffered by referee Rodrigo Crivellaro. The aggression took place five days ago, on Monday, in Venâncio Aires, Rio Grande do Sul.

The punch, the transmission missed. But the images of the cowardly and extremely violent kick in the back of the head of the judge, who was lying on the lawn, were registered and spread around the world, on the Internet.

Now for the consequences.

First, referee Rodrigo. He suffered a severe trauma to vertebra 6, a bone at the base of his neck. If there was a breakup, he could have been paralyzed or even died.

Rodrigo will make an assessment next Thursday to assess the possibility of surgery or not, if there is a slippage of the vertebrae.

Even because of this, he is already wearing an orthopedic collar. You will have it for at least three months. Therefore, he will not be able to work as an arbitrator. And you won’t be able to play the role of fitness coach either.

He’s still got his mouth ripped open from the punch. And he feels severe pain in his neck from the kick he received.

“I had an MRI, I have a lesion in the C6 there in the cervical, in vertebra 6, a ligament lesion. I will have to wear this collar for 90 days, at home, without working. If by chance there is a slippage of the vertebrae, I will have to undergo surgery.

“I pray every day that I can recover naturally

“In the medical follow-up, I’ve been talking to the traumatologist 24 hours a day, taking anti-inflammatory drugs… Apparently I’ll stay with this collar for a long time all day so I don’t touch the cervical. Every now and then I feel pain, whether it’s when I stay for a long time. sitting, lying down or standing,” he vent to Zero Hora.

There is a serious possibility that the referee will sue the player, not only for the aggression, but for the period he will be unable to work.

The Gaucho Football Federation has pledged to help him financially during his recovery.

Regarding the player, his situation is very complicated.

At first, you will not have the referee’s forgiveness.

And by ‘paying for everything you’ve done’ it means responding in court to the charge of attempted murder. He could face a sentence of up to 20 years in prison.

Willian Ribeiro was taken to prison in the early hours of last Tuesday and released on the same day.

But your assault history. Revealed by the small Progresso de Pelotas, as a boy he hit a referee. And tried to punch the father of an opposing player. His aggressive behavior sabotaged his career. Making it have short spells in 14 teams. The biggest one, the International.

He has three police reports against him. Two bodily injuries and one ‘via de facto’. They took place in 2009, 2015 and 2021. This year, Willam had already beaten a supporter of São Paulo, the club he plays for, because he was cursing the club’s coach.

Willian had his contract terminated with São Paulo, for just cause.

Lawyer José Felipe Lucca, who defended the player, and stated that he ‘never had the intention of killing’ the referee, abandoned the case.

The Gaucho Federation will judge the 30-year-old player. The aggression with serious injury to the referee can cost up to 720 days away from football, according to Brazilian sports legislation.

But FIFA can ban Willian for his attitude.

And there is a movement in the CBF for the banning request to reach FIFA. Even to serve as an example to other players in the country.

Chief of Police Vinícius Lourenço de Assunção, from Venâncio Aires, charged him in the act of attempted murder. If convicted, the penalty could be up to 20 years in prison.

Willian has refused to explain what happened.

You know you will have to face serious consequences.

On and off the field…

Hulk shows a garage with cars that exceed R$ 3 million