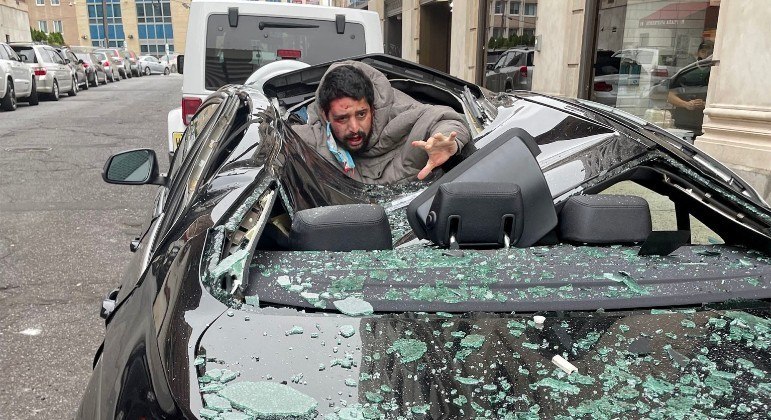 A 31-year-old man survived after falling from the 9th floor of a skyscraper in Jersey City, USA, during the morning of last Wednesday (6). The approximately 30 m high drop was parried by a BMW parked nearby and witnessed by Christina Smith, 21, author of the photo above.

In an interview with the New York Post, Christina said she saw the man get up from the roof of the vehicle with a twisted arm and ask: “What happened?” She immediately called 911 and recorded a video of the victim, who was not identified.

“I was shocked. It was like being in a movie,” said Christina, who works as a salesperson in the area where the incident took place and was on her way to a McDonald’s diner. “I thought, thank God, the fact that he was wearing a cute jacket probably helped.”

Before rescue arrived, the wounded man asked people to leave him alone and he wanted to die, reported Mark Bordeaux, 50, who works at the skyscraper in question. “He was trying to get up, but people were trying to get him to stay down,” said Bordeaux.

The boy was rushed to hospital, where he remains in critical condition, according to Jersey City spokeswoman Kimberly Wallace-Scalcione. It is still unclear what he was doing in the building, as he is not an employee at the site.

According to a source consulted by the New Yok Post, the victim of the crash has been refusing to provide an identity to the authorities or to cooperate in any other way. The Jersey City spokeswoman said investigations into the case are still ongoing but ruled out that the incident involved any other suspicious circumstances.

A 5-year-old boy fell from the 7th floor, but had his fall stopped by a blanket. Understand below!