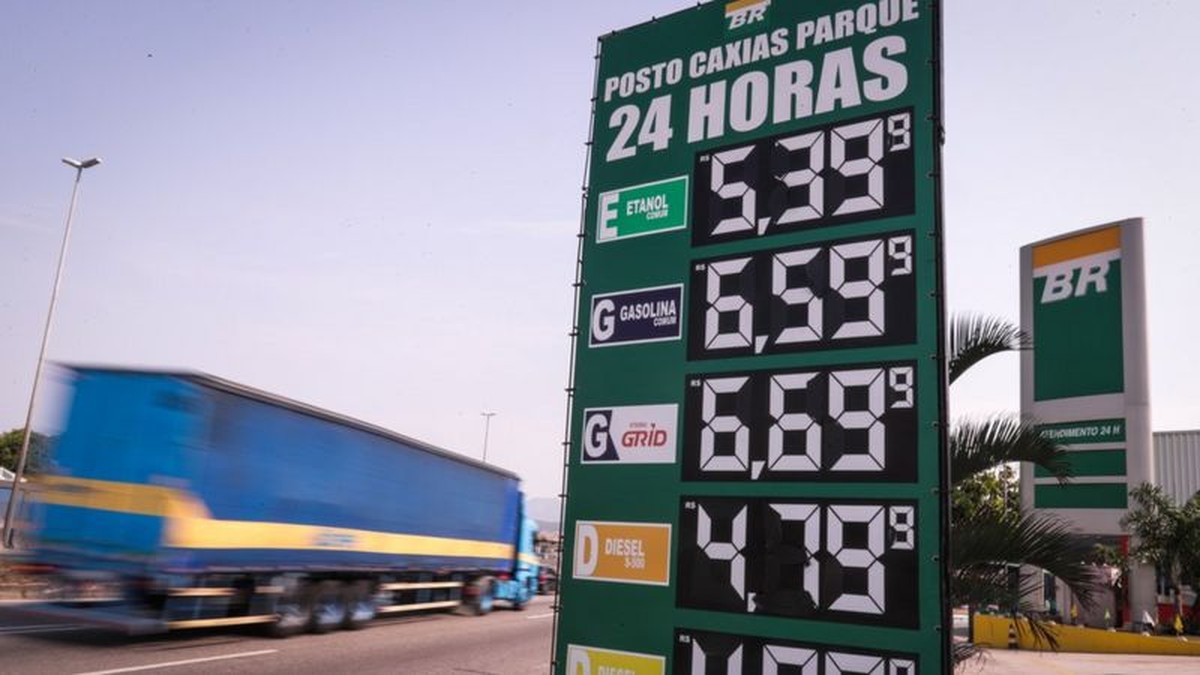 The average price of gasoline in the country, which remains firm above BRL 6 and exceeds BRL 7 in some locations, should continue to rise in the coming weeks.

This Friday (October 8), Petrobras announced a 7.8% readjustment in the fuel that leaves the refineries, a week after the diesel price also increased, and also announced an increase in cooking gas, LPG.

In a statement, the state-owned company attributes the highs to “the rise in international levels of oil prices, impacted by the limited supply in view of the growth in world demand, and the exchange rate”. And he claims that he had been avoiding the “immediate transfer” of volatility to domestic prices – according to the company, gasoline had been without an increase in refineries for 58 days and cooking gas had been for 95 days.

In recent weeks, the set of factors that had been pressing the value of fuels in the world gained a new ingredient: the explosion in the prices of natural gas, LNG, amid fears of an energy crisis in Europe.

Understand this and other reasons for the spike in prices below.

Oil prices have been on a strong upward trend since the beginning of the year. The price of a Brent barrel, an international reference, rose from US$ 80 on September 28th for the first time since October 2018.

This upward trajectory has a direct impact on derivatives — gasoline, diesel, natural gas, cooking gas — and is explained by pressures on both sides: greater demand and restricted supply.

Part of the increase in consumption is explained by the reopening of countries that have managed to implement their vaccination programs against covid-19 — and the impact of the resumption has been stronger than expected in some regions.

But that’s not the only reason.

As Julia Braga explains, professor at the Faculty of Economics at the Fluminense Federal University (UFF), China has been using more natural gas as a substitute for coal in its thermoelectric plants. The measure is part of the country’s effort to meet the goals for reducing the emission of pollutants and is part of the medium and long-term policy of energy transition in China.

“This also puts pressure on the price of a barrel,” he points out.

The price of natural gas soared in recent weeks with the highest consumption also in Europe, surprised by the reduction in renewable energy generation, which had been playing an increasingly important role in the region’s matrix.

Many of the continent’s wind farms are producing less than capacity because it has been less windy. On September 29, SSE Renewables, a British company in the sector, said in a statement that its production between April and September was 32% lower than expected and pointed out as one of the reasons the fact that last summer was one of the least winded in Ireland and the UK.

In addition, the resumption of activities at a higher-than-expected pace substantially increased the consumption of natural gas on the continent during the summer, without the supply recovering at the same speed.

The scenario sparked an alert among authorities, with the imminence of the arrival of winter, when energy consumption seasonally already grows.

If the demand for oil and derivatives grew on the one hand, the supply did not keep up.

One of the reasons comes from the very dynamics of the Organization of Petroleum Producing Countries (OPEC), a cartel that brings together 13 countries and concentrates around 33% of global production of the commodity (around 30 million barrels per day).

The group often limits production to avoid substantial drops in prices or even increase the price of a barrel.

This happened last year, when OPEC decided to cut production because of the pandemic. Activities are gradually being normalized, with the expectation that supply will be completely resumed by December 2022.

Demand, however, has been growing at a faster pace.

The jump in the price of a barrel in recent months has led countries like the United States to pressure OPEC and its allies (which form, with the organization, OPEC+) to accelerate the recovery. As in Brazil, the price of gasoline in the US jumped in 2021.

The appreciation of the barrel of oil has a double effect for countries like Brazil, which are undergoing a deep exchange rate devaluation.

The price goes up not only because the commodity itself costs more, but because the dollar is also more expensive.

A series of factors explain why the American currency has remained at a high level, above R$ 5 per dollar. Some are external, such as the expectation of an increase in interest rates in the United States and the withdrawal of the monetary stimulus program, others, internal.

“This is where the institutional crisis comes in, the fight between the powers that be”, explains Braga.

“And this very bad image that Brazil transmits to the whole world, not only in the political part, but also the anti-Science vision [do governo], environmental policy, with an increase in fires, at a time when the world is increasingly sensitive to these issues. All of this ends up affecting the decision of international investors to bet on Brazil”, he assesses.

Biofuels that are included in gasoline and diesel also experience a strong increase, contributing to pressure the final price of fuels.

Anhydrous ethanol accounts for 27% of the liter of gasoline sold at service stations; on the other hand, biodiesel today is equivalent to 10% of the diesel that comes out of the pumps.

The first accumulates an increase of almost 60% since the beginning of the year, according to data from Cepea/Esalq. The jump is a direct consequence of the adverse climatic effects that have hit the country: the lack of rain and the frosts in June and July reduced the production of sugarcane, its raw material.

Soy used in biodiesel, in turn, is also more expensive. With greater demand and supply also hampered by droughts, the price of the commodity has risen by more than 70%.

Petrobras’ role in the market

The dollar and the price of oil have had more influence on fuel prices in Brazil since 2016, when Petrobras started to practice the International Parity Price (PPI), which is guided by fluctuations in the international market.

The policy change was a response to the price controls that were in place at the state-owned company between 2011 and 2014 as part of a strategy by the government of then president Dilma Rousseff (PT) to curb inflation.

The company’s cash was severely affected. On the one hand, it earned less than its potential; on the other, it even subsidized the price, often importing more expensive fuel and selling it cheaper in the domestic market to meet demand.

The imbalances led the company to increase its indebtedness level, compromising its investment capacity. This was also a period when billions in resources were siphoned off in massive corruption schemes.

Although the state-owned company does not have a monopoly on refining in Brazil, Petrobras is still the main fuel supplier in the country. It owns 13 of the 18 refineries in the country and concentrates 98.6% of the total production capacity, according to ANP data for 2020. Thus, the prices charged by the company end up having an impact on the entire chain.

It is a mixed capital and publicly traded company with private investors. The Union, however, is the majority shareholder.

In recent years, the company has not only changed its pricing policy. It also changed its focus, today more concentrated on oil extraction than refining, points out UFF professor Julia Braga. The so-called “divestment plan” of the state-owned company provides for the sale of 8 of its 13 refineries.

“The pre-salt is a resounding success, it has a very low cost, while the refining part is not as competitive. So this idea of ​​’deverticalizing’ to preserve its profit generation prevailed,” says the economist.

A lower refining capacity, says the economist, means greater dependence on imports, which leaves the company with less room for maneuver to cushion the fluctuations of the international market on prices.

“Now we are seeing that this other extreme [em termos de visão para a empresa] ‘takes its price’. You lose this instrument that could be used to try not to immediately pass on all the volatility you see in oil prices,” he adds.

In the case of gasoline, Petrobras accounts for around 34% of the price paid by consumers. The pricing structure was used at the end of September by the president of the state-owned company, Joaquim Silva e Luna, as an argument to defend the current pricing policy. At the time, he stated that “anything that exceeds R$ 2” is not the company’s responsibility.

In addition to Petrobras’ 34%, around 16.5% represents the cost of anhydrous ethanol, 10.7% goes to distribution and resale, 11.3% corresponds to federal PIS/Pasep and Cofins taxes and 27.7% to ICMS , state tax.

For months, ICMS has been the subject of friction between the federal government and the states. In late August, Bolsonaro even stated in an interview that the rise in fuel prices was due to “the greed of the governors”.

In this sense, Braga considers that the ICMS rates practiced by the States have not changed and, therefore, the increase in prices cannot be attributed to the tax.

The nominal value of ICMS paid per liter of fuel increased because its cost, used as the basis for the calculation, is higher.

The rates, however, are the same practiced before the current crisis: both in May last year, when gasoline cost an average of BRL 4.00, and in this month of September, with the price at BRL 6, the percentage charged in São Paulo, for example, it is the same, 25%.