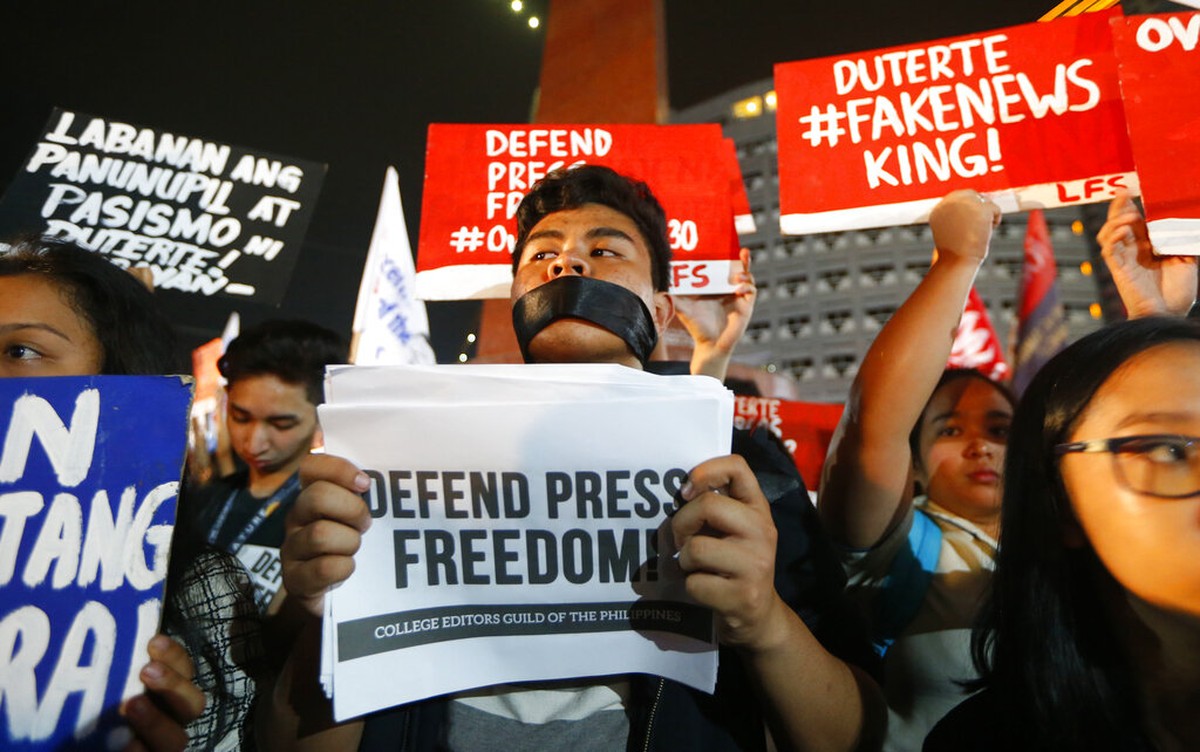 In nearly three decades, at least 145 journalists have been killed in Russia and the Philippines while practicing their profession, the Committee to Protect Journalists (CPJ) reported on Friday.

The report came shortly after the Nobel Peace Prize awarded Filipino journalist Maria Ressa and Russian Dmitry Muratov for their “critical voices against authoritarianism and disinformation.”

According to the international organization that provides support for professionals in risk areas, in the two countries where the award winners work, the situation is serious.

In this report, g1 shows the difficulties journalists face and what the threats to press freedom are in each of the two Nobel laureates’ countries.

CPJ’s report found that since 1992, when they started counting the data, at least 145 journalists have been killed while working in the Philippines and Russia.

Also according to the committee, in the last decade, the number of attacks on press professionals in both countries, who are also among those with the greatest impunity for this type of crime, has increased.

In three decades, 58 journalists were killed for doing their work in Russia. The number is even higher in the Philippines, with 87 media professionals murdered.

CPJ highlights the seriousness of the episode known as the Maguindanao massacre in 2009, which resulted in the death of 32 Filipino journalists in the deadliest attack on press professionals in the world (read later).

In the report titled “Getting Away with Murder” the organization lists the countries in which the most crimes against journalists have gone unpunished.

The Philippines ranks 7th in this ranking, with 11 unsolved cases. Russia is in 11th place, with 6 cases. In the count, Brazil also appears among the nations with high impunity.

Next to the Philippines, Brazil is in 8th position with 15 unsolved cases. CPJ’s calculation takes into account the number of deaths compared to the population, which is why Brazil – with more cases – lags behind the country of the Philippines, not the other way around.

Cited by CPJ as the deadliest attack on press professionals in the world, the episode known as the Maguindanao Massacre ended with the death of 32 journalists in the Philippines.

In November 2009, gunmen abducted 60 civilians – including journalists, lawyers and politicians – and executed them in a remote area of ​​Maguindanao province in the south of the country.

The Philippine Army had to be called in to help search for the bodies, which were buried in unmarked graves.

The attack was related to the regional elections that would take place the following year. One former governor was named as one of the masterminds of the crime, which was religiously and politically motivated.

More recently, under Rodrigo Duterte’s government, the Philippines is organizing a veritable war on drugs, against drug dealers and users, in the country.

The harsh repression, with summary executions, is criticized by the international community, the press and opponents.

Because of his coverage against the executions – which would often be illegal and hidden in police actions –, Ressa, who took the Nobel, suffers a campaign of persecution by the country’s government.

Rappler, the Filipino journalist’s news portal, published reports on the murders of people suspected of using drugs and revealed the use of fake news by the Duterte government.

“Rappler has paid attention to the murderous campaign of the Duterte regime. The death toll is so high that it looks like a war against the very population of the country,” said Nobel spokeswoman Berit Reiss-Anderson.

Ressa has already been prosecuted for her work, and has also received attacks from government allies — one of these, the newspaper “The Manila Times” by Dante A. Ang, a personal friend of Duterte’s.

The publication accused her, without evidence, of belonging to a group planning a coup against the Philippine president who had been considering running for re-election – which is not allowed by the Constitution.

He withdrew after criticism from the population and decided to withdraw from political life. It is now speculated that he will try to get his daughter, Sara Duterte-Carpio, to run for the position.

the government of russia has a list of 85 journalists or press vehicles that have been classified as “external agents”.

In 2012, the country adopted a law that has already been amended several times, but in essence it remains the same: vehicles that enter the list now have to submit their balance sheets to an audit, they need to report what information they received from people from outside Russia and face a series of restrictions, according to CPJ.

If the press vehicle does not observe these rules, it is subject to fines.

In recent months, the government has even ordered police raids on the homes of top reporters across the country, according to the Associated Press news agency.

Woman puts flower in memorial to Russian journalist Anna Politkovskaya, who covered abuses in the Chechnya region when she was killed in her Moscow apartment, archival photo — Photo: Pavel Golovkin/AP

It’s not just newspaper companies that face this kind of government harassment: human rights organizations face similar problems — two of them have recently closed their doors.

The Russian government denies that it is pursuing press freedom, and says that the classification of “external agent” does not prevent journalists from acting.

The “Novaya Gazeta”, the newspaper of Dmitry Muratov, one of the winners of the Nobel Peace Prize 2021, is the main independent press vehicle that has not yet been declared a foreign agent.

From 1993, when it was founded, until today, six people in its newsroom have been killed. All the deaths took place after Vladimir Putin came to power in Russia.

One of the newsroom’s first murder victims was Yuri Shchekochikhin, who, in addition to being a reporter, was a parliamentarian. He died in 2003 of a mysterious skin disease — the “Novaya Gazeta” concluded it was poisoning. The reporter was scheduled to travel to the United States, where he would attend meetings with American information agencies.

The most famous case, which was cited at the Nobel Prize, is from 2006. Anna Politkovskaya, who was critically covering the Russian government in Chechnya, was assassinated. Her death was interpreted as a response to her work. Nobody has been convicted.

In 2009, there were two murders: Anastasia Boburova, another journalist from “Novaya Gazeta”, was murdered by gunfire on the street. And a contributor to the newspaper, Natalia Estemirova, was kidnapped and murdered in Chechnya.

The “Novaya Gazeta” is said to be a newspaper that often clashes with Russian law enforcement authorities.

One of the newspaper’s owners is former Soviet leader Mikhail Gorbachev — in fact, to found the “Novaya Gazeta” he used money from the Nobel Prize he won. There are other owners, like a former KGB (the Soviet secret service) agent who became a banker and the team itself, who is also a partner.

Poisoning, imprisonment and killing of opponents

In August 2020, Alexander Navalny, Russia’s main opposition politician to Vladimir Putin, was poisoned with a substance called novichok, which was manufactured in Soviet times.

He left the country for treatment and returned to Russia in early 2021. Navalny was arrested immediately and then sentenced to more than 2 years in prison.

Russian police regularly arrest thousands of public protests in the country’s cities. The most recent wave of demonstrations came in response to Navalny’s arrest.

In 2015, Boris Nemtsov, another opposition politician who at the time was on the rise, was shot dead in Moscow.

Vladimir Putin, the leader of Russia since 1999

Vladimir Putin was named prime minister of Russia in late 1999. On December 31, 1999, then-president Boris Yeltsin made a television statement in which he announced that Putin would take over the country.

He was elected president later, but there are allegations of fraud — for example, in 2012, there were elections in which Putin won.

Observers at the Organization for Security and Cooperation in Europe said there was no real competition, as more competitive opponents were prevented from competing, and Putin’s allies benefited from government money.

Recently, Putin managed to get a bill passed and endorsed in order to remain in power until 2036.