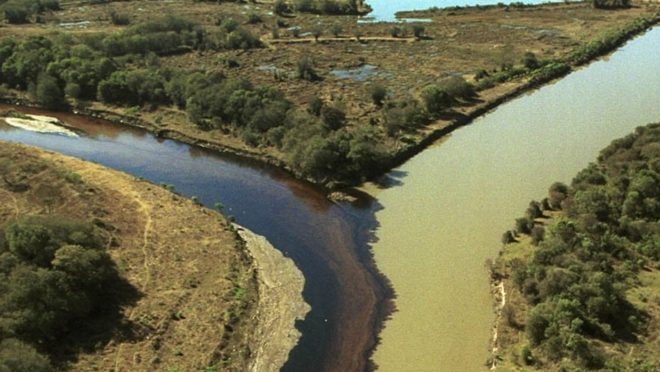 In 2000, an oil slick spread across the Iguaçu River in one of the worst environmental disasters in the history of PR| Photo: Edson Silva / Gazeta do Povo Archive

After 21 years, Petrobras will pay R$ 1.396 billion in compensation to mitigate the environmental damage caused by the leakage of 4 million liters of oil from the Presidente Getúlio Vargas Refinery, in Araucária, in the metropolitan region of Curitiba. The large-scale leak happened in July 2000, contaminating the Iguaçu River and causing great damage to the environment in Araucária and in the other municipalities of Alto Iguaçu.

Sign up and receive the main news from Paraná through whatsapp

The payment of the indemnity is part of a judicial agreement between the Federal Public Ministry (MPF), the Paraná Public Ministry (MPPR), the Brazilian Institute for the Environment (Ibama), the Paraná Water and Land Institute (IAT), the municipality of Araucaria and Petrobras. The agreement, which still needs to be ratified by the courts, was publicly confirmed by Petrobras in an official note (read at the end of this article) in this Friday (8).

The case was being processed at the Federal Regional Court of the 4th Region (TRF4). In 2013, Petrobras was ordered in the first instance to pay the indemnity. There was an appeal.

“In 2020, the TRF4 confirmed the decision of the first instance, but there was a motion for clarification and an appeal would be made to the Superior Court of Justice (STJ) and the Federal Supreme Court (STF), which would lead the process to continue for years ”, said the attorney for the municipality of Araucária, Simon de Quadros.

“On that occasion, the municipality of Araucária asked for a mortgage on Repar’s property, imposing a restriction on the sale of the refinery, which ended up motivating the agreement”, said the attorney. Petrobras had started the Repar sale process in 2020, but the proposals presented were below expectations. In February 2021, the sale process was reopened.

Under the agreement, the payment of the indemnity will be divided into four installments of R$ 349 million, the first being within 10 days after the agreement is ratified and the others every 90 days.

See where the money for compensation for environmental damage will go

Of the 66.66% destined to Fema, 5% goes to the municipality of Araucária, the most affected by the accident, and another 5% will be shared among the other municipalities in the Alto Iguaçu basin (Fazenda Rio Grande, Pinhais, São José dos Pinhais, Piraquara and Curitiba).

The resources can only be used for actions aimed at the environment, such as the recovery of degraded areas; implantation and preservation of conservation units; protection and restoration of slopes, river banks and spring areas; recovery and restoration of permanent preservation areas or areas of environmental risk; reduction of solid waste generation; implementation and inspection of Public Urban Parks, forest nurseries and Wild Animal Screening Centers; environmental education actions, among others.

“The most important thing is to resolve this issue that has gone on for so long,” says the attorney general, saint–clair Honorato Santos, who at the time was coordinator of the environmental prosecution of the Public Ministry of Paraná. “It took too long, but the solution was good. It was an accident of great proportions, with great environmental damage and now these funds will be used for the recovery of degraded areas, there is a lot to be done”, points out the prosecutor.

Oil contaminated the river and the soil

At the time, biologist Durval Nascimento Neto was participating in a research group at the Federal University of Paraná (UFPR) within the refinery, in a project involving the recovery of areas contaminated with oil. He says that the accident happened because of the rupture of a valve in the pipeline that brought oil from the port of São Francisco (SC) to Repar.

“This happened on a Sunday and, when it was noticed, a large amount of oil had already leaked out”, he says. According to the biologist, the oil leaked into the Saldanha stream, near the refinery, and from there it spread to the Barigui river, reaching the Iguaçu river. “The water and soil were contaminated. Fish, birds and amphibians died. It was one of the biggest environmental accidents in Brazil. The recovery work to remove the oil from the rivers took months and the environmental damage continues to this day”, he says.

Nascimento calculates that 30% to 40% of the leaked oil was retained in the ground, with permanent consequences. “There were 140 hectares of contaminated soil,” he says. According to the biologist, the Iguaçu River was already heavily polluted and the situation worsened. “For this reason, it is very important that this indemnity feature comes stamped for exclusive environmental recovery actions,” he says.

Check out the Petrobras note in full

Petrobras, in line with its ongoing process of evaluating contingencies, signed today an agreement in the scope of three public civil actions that investigate environmental damages arising from the leak of the Santa Catarina – Paraná Oil Pipeline (OSPAR), which occurred on July 16, 2000, at municipality of Araucária, in the state of Paraná.

The value of the agreement is R$1.4 billion, to be paid in four quarterly installments, as from its signature and subsequent court approval. The effectiveness of the agreement is subject to ratification by the Federal Regional Court of the 4th Region.

Public civil actions are classified as a probable loss in the financial statements for the 2nd quarter of 2021, and are included in environmental lawsuits provided for, note 14.1.

The company emphasizes that the signing of this agreement does not imply, on the part of Petrobras, confession or legal recognition of the alleged damages, nor the practice of unlawful conduct, referring only to the fulfillment of the agreed actions.