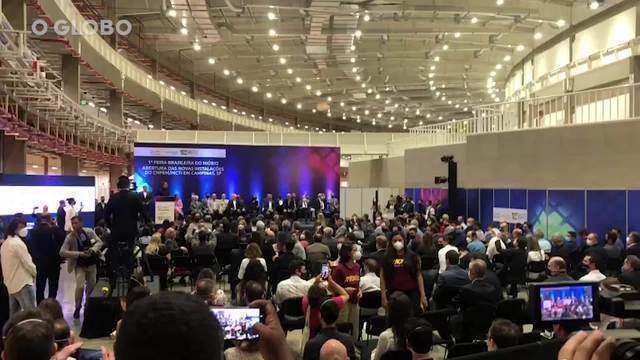 CAMPINAS (SP) — A group of six students entered this Friday afternoon at an event held by President Jair Bolsonaro, in Campinas, to protest against the 600,000 deaths caused by the Covid-19 pandemic and the cut in funding for Higher Education . Bolsonaro reacted and ordered the young people to leave the place. They left the ceremony spontaneously and peacefully. When the floor was passed to the president, a young woman who was in the audience stood up and said:

Read: Director of the PF will change the Superintendence of the DF, responsible for inquiries against Bolsonaro and allies

“Six hundred thousand deaths for Covid, against the public university cut in science and technology funding, outside Bolsonaro!”

There was little reaction from the audience. The president, already in the pulpit, showed irritation:

Later in his speech, Bolsonaro called the protesters “worthy of pity”.

During his speech, Bolsonaro recalled that in 2015, when he knew he would run for President of the Republic, he started talking about niobium and graphene. He said that when he visited Japan he found valuable chains made of niobium.

— I learned there, I don’t know if it’s true, that some are allergic to gold, these people are not politicians.

Bolsonaro also criticized the possibility of changing the time frame of the 1988 Constitution for the demarcation of indigenous lands. The subject is being judged by the Federal Supreme Court (STF).

— At the UN, I spoke out of it. ‘Don’t talk about this subject, don’t touch it, give a statesman’s speech. What statesman, eh?

The president even repeated once again that there are better people than him to run the country and complained about requests for posts in ministries.

“There are hundreds of people better than me, but the opportunity fell to me. Opportunity, not mission. Don’t want to be in my chair. If you don’t have a stomach and a lot of head, you’ll destroy your family in the first place. Rare are the people who go there to talk about Brazil. usually, it’s support, the situation is difficult, if you don’t paint a ministry, it gets complicated.

read: PSB bets on ‘creative socialism’ and the affiliation of important names to nominate Lula’s deputy

The president also again denied the possibility of interfering with fuel prices.

— I have no power over Petrobras. I’m not going to freeze the price of fuel. Many want. But we’ve had freezing experience in the past.

As he had already done the day before, he said that the Armed Forces will participate in the elections. In fact, the Superior Electoral Court (TSE) created a transparency commission that will have the participation of the military in the inspection.

Read too: Members of União Brasil will have to adapt or follow another path, says Luciano Bivar about new party

Bolsonaro participated in the 1st Brazilian Niobium Fair, held at the National Center for Research in Energy and Materials (CNPEM), in Campinas. The event takes place only this Friday and has restricted access to guests. Before speaking, the president toured the stands and spoke with manufacturers of products developed with the use of niobium.

At the fair, Bolsonaro walked without a mask in an enclosed environment, although there was no crowding.

Since before running for president, Bolsonaro has been promoting niobium and graphene and citing minerals as a way for Brazil to develop.