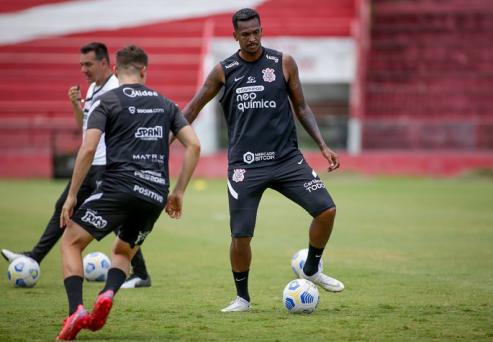 Without being able to count on attacking midfielder Willian, who didn’t even travel to Recife because of discomfort in the back muscle of his left thigh, Corinthians finalized this Friday morning their preparation to face Sport, on Saturday, at 4:30 pm, at Arena Pernambuco, for the 25th round of the Brazilian Championship.

TABLE
> See classification and simulator of Brasileirão-2021 by clicking here

The training led by coach Sylvinho was held at the Aflitos stadium, in Recife, where the work began with a warm-up guided by physical trainers Flávio de Oliveira and Fabrício Pimenta.

Afterwards, the coach from Alvinegro directed a “silly” activity with the athletes and then a ball possession practice in a small space. Goalkeepers Cássio, Matheus Donelli and Caique França carried out specific work with the coach of the position, Marcelo Carpes.

Without being able to count on Willian, Sylvinho should choose Jô as a substitute in the starting lineup this Saturday. The striker has already replaced the new Corinthians supporter after the break in the game against Bahia, last Tuesday, at Neo Química Arena, where he also scored the goal that defined the final score of Timão’s victory by 3-1, in the last round of Brasileirão.

Another novelty in Alvinegra’s starting lineup in relation to the team that started the duel against the Bahia team will be the return of left-back Fábio Santos, who ended up being spared from the last match because of the great sequence of games he played previously. Lucas Piton, who replaced him in the team, will again appear as an option on the bench against Sport.

In fifth place in the national competition, with 37 points, Corinthians entered the direct fight for the vice-leadership, today divided by Flamengo, Palmeiras and Fortaleza, all tied with 39 points. Atlético-MG, with 50, is the soaring leader.

It is worth remembering that journalists cannot follow on-site activities due to health protocols due to the Covid-19 pandemic. Training information is provided by the club’s press office.