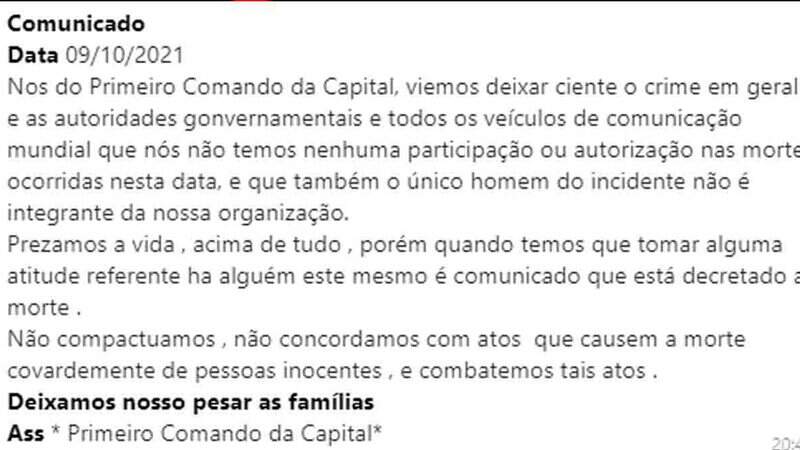 Circulates on social networks a supposed communiqué signed by the PCC denying participation in executions that took place this Saturday morning (09) with 4 victims in Pedro Juan Caballero, Paraguay’s border with Ponta Porã, Mato Grosso do Sul. Among the victims is Haylée Caroline Acevedo, 21, daughter of the governor of the province of Amambay, Ronald Acevedo.

According to the statement, 32-year-old Omar Vicente Álvarez Grance, Bebeto, who would be the target of the gunmen, was not part of the criminal faction. The police did not comment on the veracity of the message. Check the note in full:

“We, from the First Command of the Capital, have come to make the crime in general and the government authorities and all the world’s media aware that we have no participation or authorization in the deaths that occurred on this date, and that the only man in the incident did not is part of our organization.
We cherish life, above all, but when we have to take some action regarding someone, it is communicated that death has been decreed.
We do not condone, we do not agree with acts that cause the cowardly death of innocent people, and we fight against such acts.
We leave our families to grief
Ass * First Command of the Capital*”

See below the video of the moment of the crime:

Medical students Kaline Reinoso, aged 20, resident of Dourados (MS), and Rhannye Jamilly Borges Oliveira, 18, from Cáceres (MT) were in the vehicle ambushed by criminals. Paraguayans Omar Vicente Álvarez Grance, 32, who drove the vehicle, and Haylée Caroline Acevedo, 21, daughter of the governor of the province of Amambay, Ronald Acevedo, also died.

National Police managed to identify the four victims of the attack

The group was leaving a party around 6:30 am when the car they were in was approached by another vehicle.

Kaline was hit by 14 shots, while Rhannye received ten shots. The two Brazilians studied medicine at the Central University of Paraguay (UCP), Pedro Juan’s campus. Omar and the governor’s daughter were hit by more than thirty shots.

Two other people in the vehicle, Bruno Elias Pereira Sanchez and Rafaeli Nacimento Alvarez, both 20 years old, were shot and taken alive to a private hospital. Paraguayan police believe that Omar would be the main target of the attack. Another line of investigation is political crime. At least ten candidates for the municipal elections taking place this Sunday (10), in the neighboring country. A brother of the governor, José Carlos Acevedo, licensed mayor of Pedro Juan Caballero, is running for a new term as mayor of the city.

The Acevedo family dominates the political scene in the region, which borders Brazil. A brother of the governor, then-senator Robert Acevedo, was attacked in 2010. He was shot twice, rescued and survived, but two security guards died in the attack. At the time, the Paraguayan politician and police attributed the crime to the First Command of the Capital (PCC), a São Paulo faction that has ramifications in Paraguay. The Public Ministry appointed a team of prosecutors to accompany the investigations.

In Ponta Porã, on the Brazilian side of the border, councilor Farid Afif (DEM) was shot dead in the late afternoon of Friday, 8, when he was pedaling his bicycle in the central region of the city. When approached, he still ran towards a vehicle store, but was chased and shot by the snipers. The rescue service was activated, but he already found the parliamentarian lifeless. The Civil Police of Ponta Porã investigates the crime.