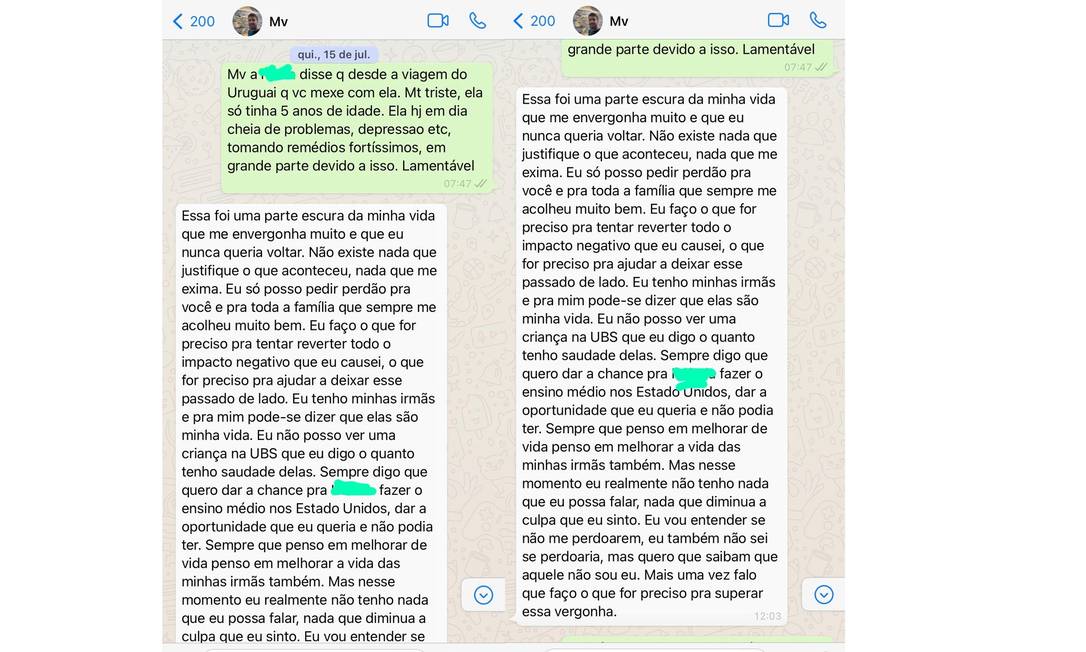 A history of family abuse, such as has never been seen in Teresina, Piauí, is mobilizing public opinion. A 22-year-old young medical student is being accused of vulnerable rape after reports from his own relatives to the police that he raped two cousins, one of them now 13, and two girls aged 9 and 3, who are his sisters. All of them have already reported the events this week directly to the Court, with the assistance of psychologists. Faced with the news that Marcos Vitor Aguiar Dantas Pereira had fled abroad, lawyer Rodrigo Araújo, who represents the victims, says that the Public Ministry will ask for the student’s preventive detention and possibly make an international communiqué of the search for the suspect to the Police Federal. Marcos Vitor’s stepmother and her sister, the children’s mothers, already treat him as a fugitive.

Read more: Delegado Da Cunha will be investigated by the Police’s internal affairs department after being approached in a bar with slot machines

The case came to light after years of interaction between Marcos Vitor and the girls. When he was just 8 years old, his father went to live with PL (who asked not to have his name identified). The middle-class couple, who live in the East Side of Teresina, had two daughters, who would have been victims of their brother. The family believes the abuse started when he was a teenager, but no one ever noticed. In court statements, the children reported that he would lock himself in his room with them, touch them and ask them to perform oral sex.

Marcos Vitor moved to Manaus about two years ago to study medicine. The reports began to be exposed to the family in July this year, after a cousin said he had been abused. The daughter of lawyer Priscila Karine Coelho Campos, sister of Marcos Vitor’s stepmother, has been undergoing psychological treatment since she was 6 years old, had changes in her behavior and even attempted suicide. Now 13 years old, the teenager told what had happened.

She reported that she was abused by her cousin at least between the ages of 5 and 10 and that he touched her private parts. The abuses, reported by the young woman, would have started during a trip with the whole family of the two sisters to Uruguay. Priscila says that after telling the family her daughter began to improve.

— The girl took antidepressants since she was little, she was always sad, silent. And no one understood why. It’s an eyesore. From then on, his stepmother began to suspect that the same could have happened to her daughters. She asked him who confessed to the crime, but since then he hasn’t been seen anymore – says lawyer Rodrigo Araújo, who works as an assistant at the Public Ministry in the case.

Education: STF decides that government is not required to nominate the most voted triple list for rector

Marcos Vitor’s father is a businessman and, after the scandal began, he and PL separated. The stepmother believes that the father has been defending the boy, who has not yet appeared to testify with the state’s Civil Police. The children were heard in court so that they do not have to be subjected twice to an extremely traumatizing testimony.

“He was always raised as a son, he went on family trips. When he went to medicine in Manaus, my family organized everything for him to go. After my niece told him what he was doing, my mother told me to keep an eye on my daughters. I questioned my 9 year old daughter but thought “he wouldn’t do that to his own sister”. Always lived together, no one saw anything different. She confirmed it to me, crying. Then my 3-year-old daughter also confirmed — says her stepmother.

New standard: Bolsonaro issues a decree that provides for faster authorization of pesticides

According to Araújo and his stepmother, Marcos Vitor confessed to the crime through messages exchanged with her through a cell phone application.

In a long account attributed to him, the student says: “That was a dark part of my life that embarrasses me so much and that I never wanted to go back. There is nothing to justify what happened, nothing that holds me back. I can only ask I’m sorry to you and all the family who welcomed me so well. I do whatever it takes to try to reverse all the negative impact I’ve caused, whatever it takes to let go of this past. I have my sisters and for me I can- if I say they are my life. I can’t see a child at UBS I say how much I miss them,” who added that his dream was to take his sisters to study in the US, to build a career he wouldn’t have had himself. the oportunity. In the same conversation, he would have added: “I’ll understand if you don’t forgive me, I don’t know either and I would forgive myself, but I want you to know that that’s not me”.

Since then, Marcos Vitor has been in an unknown location. The messages were delivered to investigators. Wanted by the report, his lawyer said he could not comment on the case, as it is being processed in secrecy.

The lawyer Rodrigo Araújo says that the whole family is in shock because Marcos Vitor was considered an impeccable, educated, respectful, intelligent and studious young man. On social networks, he used to defend rigor against crimes similar to what he is now accused of. He said that he loved his sisters above all and that he would like to take them abroad to study.

“He admitted to his stepmother that he abused the children. There are still others who are not of the family but who have not yet wanted to speak out of shame. He said that he regretted what he had done and that this was a dark side he had had for a long time. After that it disappeared. There have already been family members, on the part of the father, who is protecting him by saying that he went to another country to take a course and only come back when the situation calms down. They’ve even said that he had attempted suicide, but that’s a lie,” says Araújo.

— Nobody suspected, he didn’t drink, he didn’t smoke, he always had a steady girlfriend. He dated for several years, ended up when he went to Manaus and already had another girlfriend there. It wasn’t like going to a party, it wasn’t on top of the kids. In my entire family no one thought he could do that. The girls say it was countless times – says Priscilla.

The children’s mothers complain about the delay in the progress of the process. That’s why they decided to expose the case on social media.

“We were told that because he was a primary, it would take at least five years for him to have a viable prison case. It was one of the reasons we decided to post. The girls’ testimony would only be three years from now, now they have already been heard. It would give him time to graduate. I contacted the CRM (Regional Medicine Council) and they said that they only lose the record in case of a relationship between doctor and patient. We had to do something because he was going to be a doctor and a child rapist,” says Priscila.