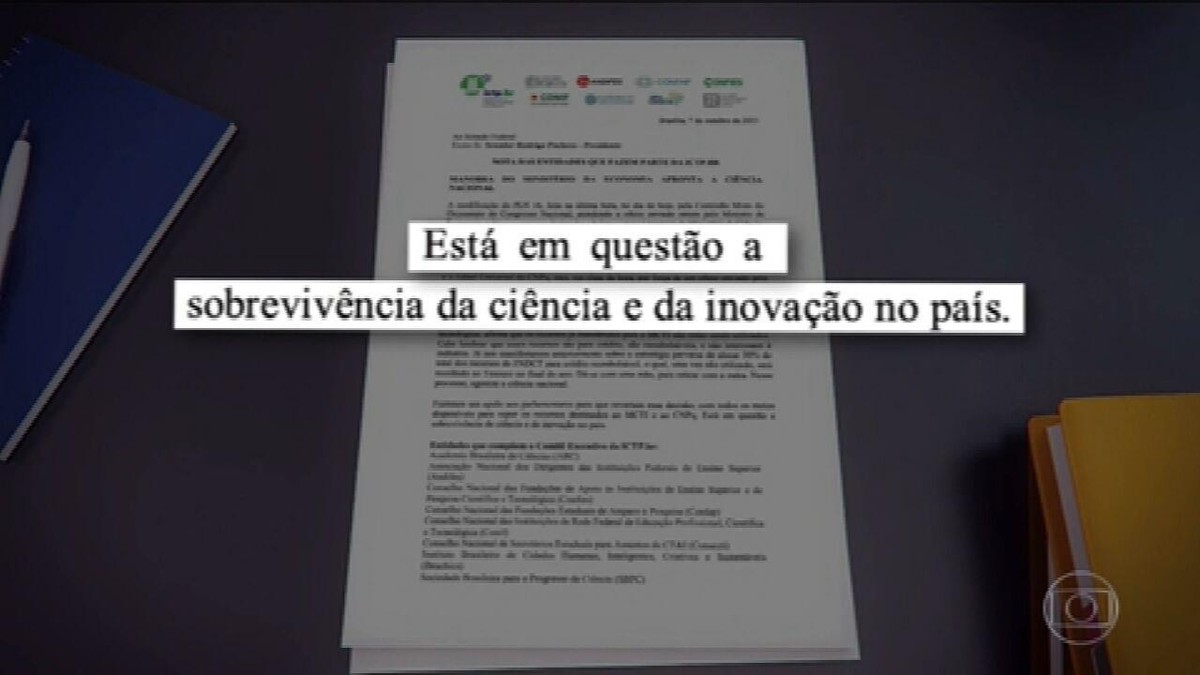 They point out that it is a blow to science that harms the country’s development and impedes research initiatives such as the National Council for Scientific and Technological Development (CNPq).

As it was approved, the proposal takes 90% of the resources from the National Scientific and Technological Development Fund (FNDCT) and transfers them to other areas of seven ministries.

The FNDCT is managed by a council linked to the Ministry of Science, Technology and Innovation. The fund’s objective is to finance innovation and scientific and technological development to promote the country’s economic and social development.

The Ministry of Economy states that it sent an official letter to the Mixed Budget Commission to comply with the government’s decision on the need to reallocate resources, which was endorsed by the Budget Execution Board (JEO) (read the note from the ministry at the end of the report).

See the repercussion below

Initiative for Science and Technology in Parliament (ICTP.br)

In a note to the president of the Senate and Congress, Rodrigo Pacheco (DEM-MG), the Initiative for Science and Technology in Parliament (ICTP.br) stated that the Ministry of Economy’s office “affronts national science.”

“It is a hard blow to science and innovation, which harms national development,” said ICTP.br.

ICTP.br, a group that brings together research entities, criticized the federal government’s argument that the resources transferred to science and technology were not being used.

In the document, ICTP.br also classifies as “perverse” the practice of allocating 50% of FNDCT resources as repayable credit, that is, which is collected by the Treasury at the end of the year if it is not used.

“It is given with one hand, to withdraw with the other. In this process, national science agonizes”, he pointed out.

Brazilian Society for the Advancement of Science (SBPC)

According to the SBPC, the funds would be used to cover costs for the resumption of the Universal Public Call, announced in August by the Ministry of Science, Technology and Innovation.

“It causes justified indignation that the economic team refuses to comply with the country’s laws, maneuvering in the last minutes of a legislative process that has its time, to avoid allocating the money raised to finance science, technology and innovation,” said the SBPC.

“When we most need science, the economic team acts against the law, with maneuvers that suggest a deliberate intention to harm the scientific development of Brazil”, he continued.

The National Association of Graduate Students (ANPG) said that there will be no money to pay researchers’ scholarships.

“In practice, it is the total dismantling of the CNPq and the burial of projects such as the Universal Notice, the farewell to the recomposition of programs from the National Institutes of Science and Technology, Junior Post-Doctorate, Science at School, Brazilian Multipurpose Reactor and the Virus Network (an initiative with projects that fight emerging viruses, such as Covid-19)”, said ANPG.

The group held a virtual meeting this Saturday (9) to discuss the crisis of science with the cut in resources.

Among scientific popularizers, the expectation is that the cut of more than 90% in research resources will make the future of science in Brazil even more complicated.

The director of the Human Genome Research Center at the University of São Paulo, Mayana Zatz, said that the reallocation of resources will bury science.

“The 90% cut in the funding for science will definitely bury it. Members of parliament, don’t let that happen. Don’t bury the country’s future,” he said.

For biomedical scientist Mellanie Fontes-Dutra, science has suffered a “very hard blow” at the moment when it is most needed.

Epidemiologist Ethel Maciel highlighted the fact that the news about the cut in research resources arrived on the same day that Brazil reached 600 thousand deaths by Covid.

What does the Ministry of Economy say

“On Thursday (7/10), the Ministry of Economy (ME) sent an official letter to the president of the Mixed Budget Committee, senator Rose de Freitas, containing a proposal to change PLN 16/2021, which addresses supplementary credit in favor Ministry of Science, Technology and Innovation (MCTI).

This proposed change was made to comply with the government’s decision regarding the need to reallocate resources at this time, which was endorsed by the Budget Execution Board (JEO).

The amendment submitted by the ME submitted to the consideration of the National Congress a proposal to supplement various budget demands, with funds from other sources. These are not resources originating from the FNDCT contingency reserve. Among these demands, there is the provision of R$ 89.8 million for the MCTI. Of this total, R$ 63 million will be allocated to expenses with the production and supply of radiopharmaceuticals in the country. Another R$19 million will go towards operating laboratory facilities that provide operational support for production, service, development and research activities.

It also includes expenses from the Ministry of Health, Education (R$107 million for the granting of scholarships in higher education and another R$5 million to support the development of basic education), Citizenship, Communications, Regional Development (R$ 150 million for civil defense and protection actions associated with the distribution of drinking water to populations affected by drought and drought (Car-Pipa Operation), R$ 100 million for the payment of housing quotas of the Residential Lease Fund and R$ 2, 2 million for water infrastructure works) and Agriculture, Livestock and Supply.”