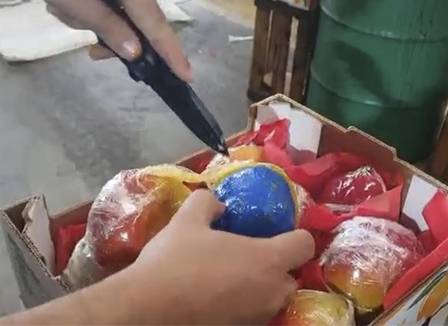 The facility offered by Rio de Janeiro bandits to store narcotics and the help they give in the maritime shipment of large shipments attracted international traffickers: today, Rio de Janeiro is on the main shipping routes of cocaine hydrochloride (the purest and most valuable form of the drug) from South America to Europe and the United States.

The intensification of inspections at the Port of Santos, in São Paulo — the largest in the country and, until a few years ago, the site of the largest seizures of cocaine on Brazilian soil — also contributed to the current scenario. A survey carried out by EXTRA shows that, in the last 20 months, between February 2020 and October 5 this year, police found 10.5 tons of the drug about to be shipped in Rio.

The seized shipments came from Colombia, Bolivia, Venezuela and Peru, countries where a kilo of cocaine costs around a thousand dollars (about R$ 5,500). Investigations by the Federal Police and the Police Stations for the Repression of Narcotics (DRE) and Theft and Theft of Cargo (DRFC) of the Civil Police of Rio reveal that bandits from Maré have kept cocaine hydrochloride for international traffickers until it is placed in containers.

According to investigators, the narcotic, whose price per kilo in Europe reaches 40,000 euros (almost R$260,000), is hidden in communities for periods ranging from two to five days. The bandits who control these favelas receive “rent” in dollars, police say.

—Traffickers of a criminal faction are renting territories, mainly in communities near the Port of Rio. We already know, for example, that Rodrigo da Silva Caetano, Motoboy, head of the Nova Holanda (Maré) gang, charges a hundred dollars for each kilogram stored,” says delegate Marcus Amim, from DRE.

An investigation by the DRFC reveals that part of the Maré gang, specialized in cargo theft and assaults on electronic product distribution centers, made contact with bandits operating in the Port of Itaguaí and decided to enter the new and profitable business in Rio.

— Gangs that originally practiced cargo theft migrated their activities to exporting cocaine, due to the high value of the drug on the international market — explains delegate Vinícius Domingos, from the DRFC, who is conducting an investigation into the activities of the criminals.

Of the 10.5 tons seized in Rio (worth approximately 420 million euros, or about R$2.6 billion), just over half were discovered in two operations carried out this month. On the 1st, DRFC and Federal Police agents seized 700 kilos of cocaine in a shed in Itaguaí. The drug was inside sleeves, which had the lumps removed. The shipment would go to Belgium.

The other arrest took place on the 5th, when federal police found five tons in boxes of powdered soap that were to be taken to Mozambique and Spain.

A ‘loaded’ truck on Avenida Brasil

The suspicion that international traffickers use facilities in Rio de Janeiro communities to store drugs destined for export began to be confirmed by the Civil Police on December 15 last year. At the time, investigators from the 25th PD (Engenho Novo) intercepted a truck on Avenida Brasil carrying 216 kilograms of pure cocaine.

The drug shipment was divided into tablets. The vehicle had just left Favela Nova Holanda, in Bonsucesso, and would head to a warehouse in Duque de Caxias. From Baixada Fluminense, the cocaine would be transferred to a container and taken to a ship in Rio.

On the 1st of that same month, federal police had already blown up another shed, also located in Duque de Caxias, with 2.5 tons of cocaine hydrochloride. Two men were arrested in the act, including a military police officer. He was off duty and, according to investigations, was one of those responsible for security at the site.

Investigations by the Rio Civil Police’s Narcotics Repression Precinct reveal that international traffickers have been using bitcoins — virtual currencies — to launder the money obtained from the sale of drugs.

Preliminary information reveals that bitcoins, also called cryptocurrencies, are proving to be very useful for gangs that seek to make it as difficult as possible to track their financial transactions.

Virtual coins have been acquired by criminals for at least three years. The first indication came in July 2018, when the Federal Police arrested 15 people in Rio de Janeiro suspected of being part of a gang that exported cocaine in containers.

At the time, the Federal Police discovered that the group was diversifying its drug trafficking business with the help of virtual currencies. In October of that same year, the corporation seized 78 kilos of cocaine hydrochloride.

The drug was in seven backpacks, found on a ship anchored in the Port of Rio that would go to Antwerp, Belgium. At the time, nine people were arrested here, in Paraíba and in Rio Grande do Norte. Among them were three stevedores who helped to ship the narcotic.