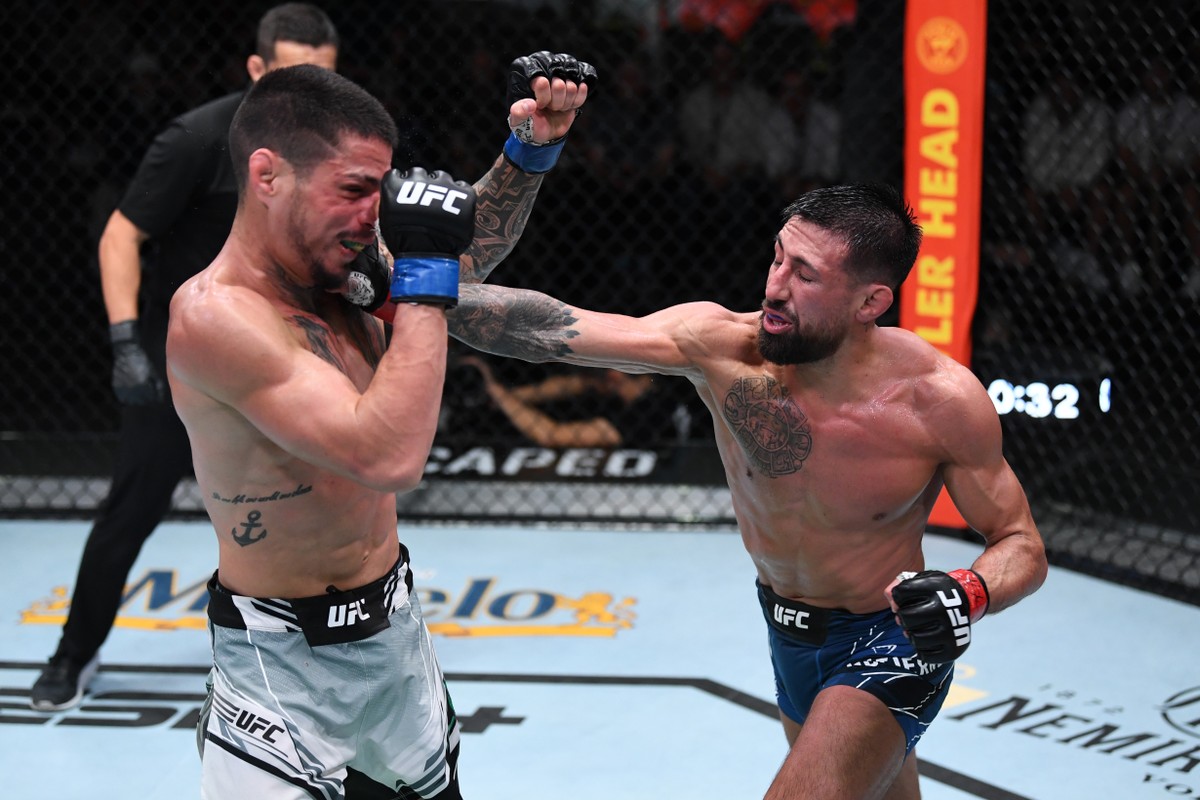 Bantamweight Felipe Cabocão did what he could, but failed to impose himself on American Chris Gutierrez in the opening of the main card of UFC Dern vs. Rodriguez. Appearing worn out by the weight cut, the Amapá resisted the rival’s attacks and tried as much as possible for a submission, but Gutierrez was more efficient in the standup fight and left the octagon with a victory by split decision (28-29, 30-27 and 30-27).

The fight began with the two fighters delivering kicks to the legs and measuring the distance in the center of the octagon. Cabocão showed to be attentive to the American’s fight plan, and counterattacked after a kick with a straight right, shortening the distance and stopping Gutierrez in the grid. The American tried for a takedown, but the Brazilian defended, remained standing and tried to apply a technical tie, without success, at the end of the round.

The fight resumed with more movement, with Cabocão and Gutierrez showing more aggression and connecting more punches than in the previous round. The American used the low kicks to undermine the Brazilian’s legs, who tried the high kicks to prepare for the approach and the takedown attempt. Cabocão seemed to be more tired than Gutierrez, and the American connected more blows at speed, which the Brazilian had difficulty blocking.

In the third and final round, despite being tired, Felipe Cabocão managed to resist Chris Gutierrez’s attacks and take the fight to the ground with two minutes to go. In the American’s guard, the Brazilian stayed on top on the ground and kept hitting his rival without force until Gutierrez managed to get up and go on top of Cabocão in the final seconds, hitting him and calling him to fight. Shaken, the Brazilian defended himself, but ended up being knocked down in the last move of the fight.

With 14 wins in 14 career bouts – 13 of which ended by knockout or submission – Moldovan heavyweight Alexandr Romanov claimed another victim this Saturday. Imposing his greatest physical strength, he ignored the American Jared Vanderaa, and got another knockout in his career, this one won at 4m43s of the second round. After a less dominant first round, Romanov left to take the fight to the ground early on. Without receiving resistance on the ground, the Moldovan applied a violent “ground and pound”, wounding and undermining Vanderaa’s resistance, who only defended himself until the referee ended the fight.

In a very busy fight, and which had a real “bloodbath”, the featherweight Damon Jackson defeated Charles Rosa by unanimous decision by two judges (29-28, 29-27 and 30-27) in a very intense duel, which was marked by the cut Jackson suffered on his forehead, the result of a spinning elbow given by Rosa in the third round, which bled profusely until the end of the fight.

Damon Jackson bleeds profusely on the floor of the Octagon in his fight against Charles Rosa at UFC Dern vs. Rodriguez — Photo: Getty Images

The two fighters had great moments in the first two rounds, with Rosa taking the advantage in the beginning, and Jackson managing to turn the fight around in the second round. In the third round, early on, Rosa landed a spinning elbow to Jackson’s head that opened a deep wound, which began to bleed profusely. Even after a medical stoppage to check on Jackson’s condition, the fight continued, and the bleeding increased to the point that it covered both athletes. The referee decided the fight to continue until the end,

In a great performance, Mexican straw weight Lupita Godinez was unaware of Argentine rookie Silvana Juarez. With a much higher volume of play than her rival, Godinez dominated Juarez in the standup fight from the start, connecting a kick at the waistline and dominating the Argentine on the grid until he managed to knock her down and dominate her on the ground. A mistake by Juarez when spinning on the ground opened the space for the Mexican to fit an armbar that made the Argentinean forfeit.

In the first fight of the event, the lightweight Steve Garcia got an important victory over Charlie Ontiveros by TKO at 1m51s of the second round. After starting the fight at a disadvantage, suffering a knockdown at the beginning of each round, Garcia recovered and prevailed against Ontiveros, winning his first victory in the UFC, and imposing his rival’s second defeat in two fights.

The fight began with Ontiveros managing to shake Garcia in the first seconds of the first round with a high kick that landed squarely on the rival’s head. Groggy, Garcia received two more blows from Ontiveros, suffering a knockdown. Showing a lot of grit, Garcia managed to take Ontiveros down and keep the fight on the ground. After suffering an attempt at a guillotine, Garcia recovered and knocked his rival down, getting on the floor on top, gaining time and striking to seek control that would give him victory in the round. In between, Ontiveros had a deep cut on his right eyebrow.

The fight resumed fast-paced in the second round, with the two fighters connecting good blows. Ontiveros got another knockdown, but Garcia recovered and knocked him down again and, on top of the ground, made the mount and started to deliver elbows in the area of ​​the rival’s wound. Ontiveros felt it and a new series of blows forced the referee to decree the technical knockout in favor of Garcia.

Come and cheer for the Brazilian Squadron! It’s live and exclusive on Combate! — Photo: Infosport

Come and cheer for the Brazilian Squadron! It’s live and exclusive on Combate!