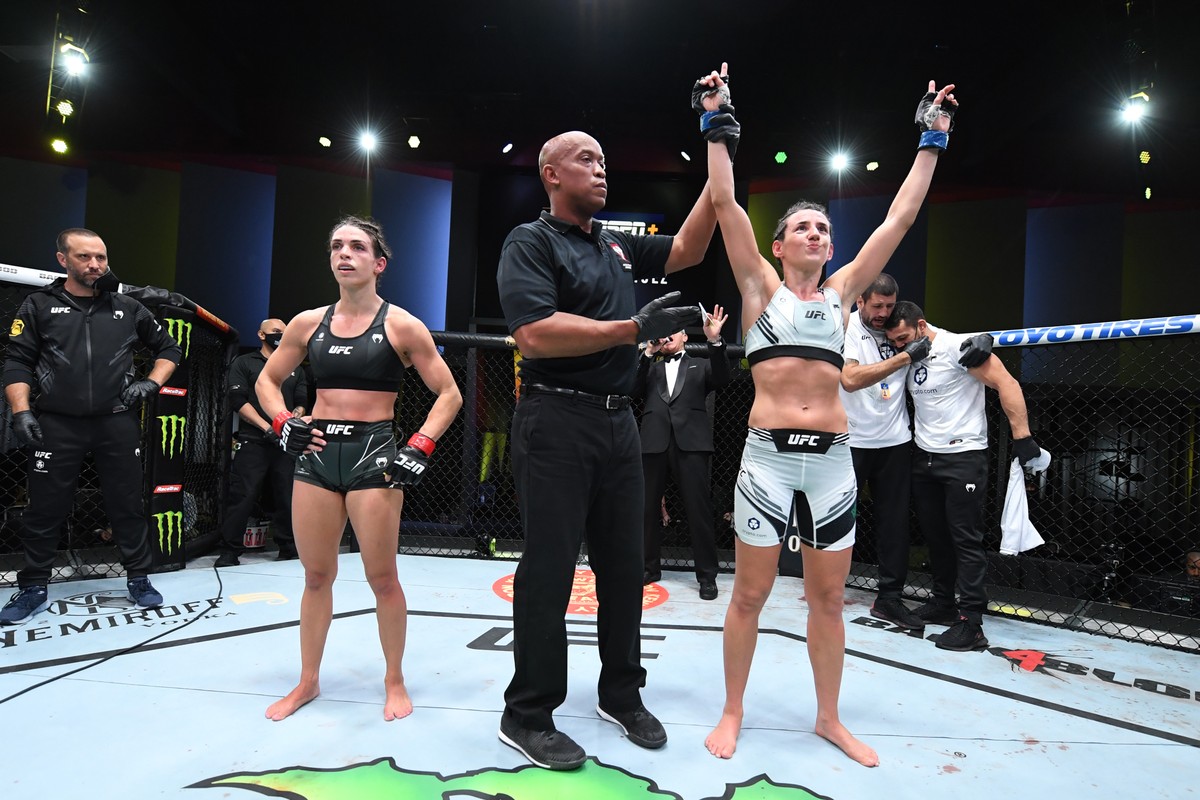 It was a real battle. Marina Rodriguez and Mackenzie Dern, number six and four respectively on the UFC strawweight ranking, showed why they are considered stars in their fields of expertise. If Dern has an excellent ground game, Rodriguez showed that his striking is not far behind. And, with a gala performance, she resisted her rival’s attacks on the ground and asserted herself standing up, winning one of the best female fights of recent times with authority: unanimous decision by the judges (triple 49-46) and the certainty that she was firm. as one of the top names for the division’s upcoming title fights.

– I didn’t feel threatened to be submitted at any time. Of course, she has a heavy hand, but in the fight I didn’t feel any danger of being submitted. The strategy was to be calm, because she excels in grappling. If I went all out, I would play her game. But I made her play my game. I’m very happy with two excellent performances in five rounds against two very experienced athletes. When the UFC wants it, I’ll be ready. I know there are some girls waiting, but if they are not available, I will be to fight for the belt – said Marina Rodriguez after the fight.

The fight started with the two fighters throwing kicks at the waistline and legs. Mackenzie Dern was trying to throw blows to get closer and take the fight to the ground, while Marina Rodriguez kept her rival at bay with long jabs. Halfway through the round, Dern managed to land a right hook and caught Rodriguez in the grid, but left his arm exposed and Rodriguez stopped him. Dern spun around, freed his arm, but lost control of the actions on the grid. The two returned to duel in the center of the octagon, and Rodriguez connected two good blows at the waistline before the break.

Mackenzie Dern managed to close the gap early in the second round, but Marina Rodriguez avoided his approach. On his second attempt, however, Dern managed the takedown, and kept Rodriguez with his back on the ground by the railing. With his knee in his rival’s stomach, Dern controlled the actions, but Marina Rodriguez fitted a hand triangle underneath, and Dern had a lot of work to get out. When he freed himself, he applied a crucifix, controlling both of Rodriguez’s arms, which he managed to free a little later. Dern made the transition to the back, then the mount and began the “ground and pound”. Rodriguez defended himself as best he could until halftime.

Mackenzie Dern dominated Marina Rodriguez on the ground in the second round of the UFC — Photo: Getty Images

Marina Rodriguez returned aggressively for the third round, connecting right and left punches, while Mackenzie Dern looked more tired after the second round. With some haste, Dern tried to attack by walking forward, but left gaps for Rodriguez to land blows and score. With better movement, Rodriguez avoided Dern’s approaches.

The fourth round brought Mackenzie Dern again flustered in search of the approach, with scattered punches and leaving space for Marina Rodriguez to counterattack. More physically whole, Rodriguez controlled the movement and dominated the fight distance, striking consciously. Dern had a hard time getting close, and when Rodriguez got close to her, he connected blows in succession. In the final minute of the round, Dern got the takedown, falling already mounted and, after a few blows, tried for a shoulder blade, which was interrupted by the end of the round.

Marina Rodriguez controlled the distance and dominated the end of the fight against Mackenzie Dern in the UFC — Photo: Getty Images

The start of the fifth and final round was similar to the previous three, with Mackenzie Dern seeking the attack and Marina Rodriguez waiting and counterattacking well. Rodriguez’s swinging technique kept her safe from Mackenzie Dern’s boats. Rodriguez commanded the attacking actions in the round, but with one minute left in the fight, Dern managed to get close to the grid. Very tired, Dern couldn’t take down her rival, who defended herself, walked away and ended the fight attacking.

With a cerebral and very conscious performance, the flyweight Matheus Nicolau got an important victory over the American Tim Elliott by unanimous decision (triple 29-28). Showing a good physical preparation and a lot of precision in the blows, mainly in the movement of Elliott in his direction, the Brazilian established himself in the top 10 of the category.

The fight began with Elliott performing his traditional unconventional move, while Nicolau sought to apply punches when the American approached. The Brazilian even lost his balance in an attempt to defend himself, and nearly received a kick from Elliott when he was down. Nicholas landed a new encounter blow, but Elliott, as he fell, grabbed his leg, lifted him and knocked him down. The Brazilian got up quickly, but was caught in the grid. The two exchanged blows in the final seconds of the round.

Tim Elliott returned for the second round shortening the distance and immediately dominating Matheus Nicolau’s back. The Brazilian got rid of the position and connected a good blow soon after, unbalancing the American and then hitting a good combination of cross and kick in the calf that hit the rival squarely. Elliott smiled and called Nicolau to the fight, but the Brazilian didn’t get into his rival’s provocation and showed precision in his blows, connecting more than the American.

With Elliott’s movement assimilated, Matheus Nicolau started the final round connecting good blows in the American’s approach. Elliott was trying to speed up the pace, but he couldn’t find the Brazilian. Unable to strike efficiently, the American went into the grappling fight, and caught Nicolau in the grid for a few seconds, before the Brazilian broke free. Halfway through the round, Nicolau knocked Elliott down, keeping him with his back on the ground. As the American clung to him, waiting for the referee to tell them to get up, the Brazilian would get up and nail his back to the ground and keep active to stay in the advantage position. The American managed to get up in the final seconds, but there was no time for anything else.

Come and cheer for the Brazilian Squadron! It’s live and exclusive on Combate! — Photo: Infosport

Come and cheer for the Brazilian Squadron! It’s live and exclusive on Combate!