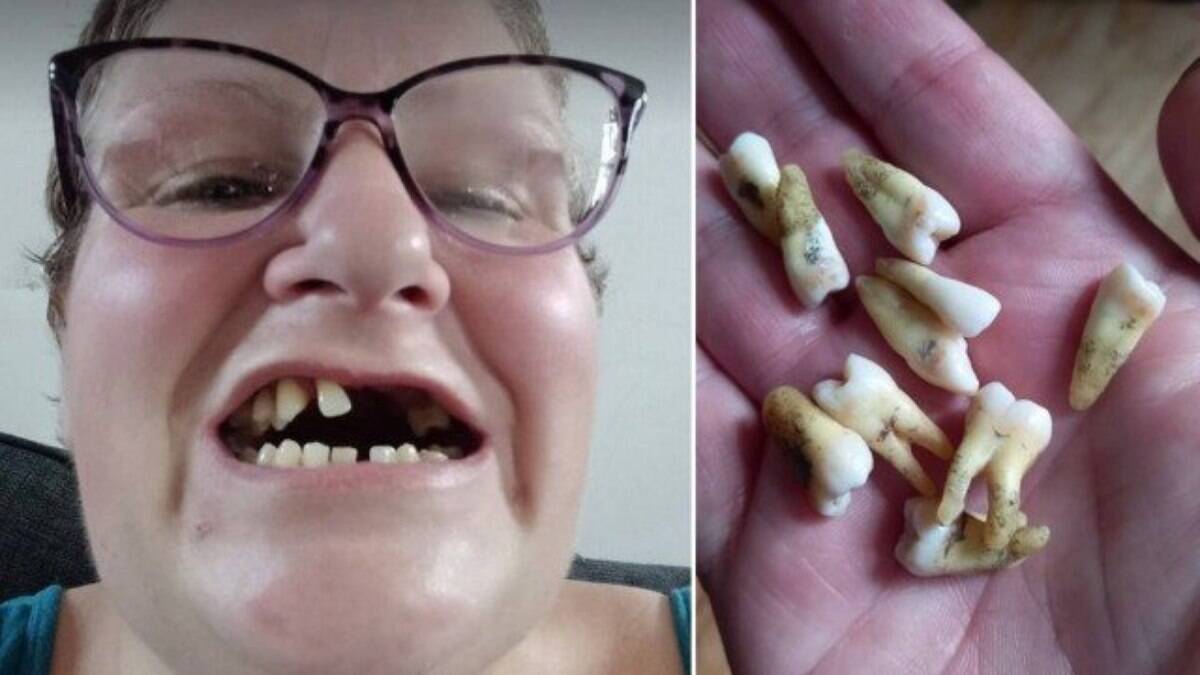 Six years ago, some teeth of Danielle Watts, then 36, started to go soft. The resident of Suffolk, England, began her ordeal for the public health system, the NHS. Due to a huge waiting list, she was unable to make an appointment with a dentist. And the problem was getting worse, even more with the beginning of the Covid-19 pandemic, when the attendances became very scarce.

With no money to do the treatment in a private clinic, the British woman could only wait, enduring more and more frequent and intense pain. Until recently, she made a decision: pulling 11 teeth by herself! In conversation with the PAGE NOT FOUND
, from the newspaper Extra
, Danielle, 42, who is unemployed, told how it all happened:

Do you have any dental skills or was it all impromptu?

None. It was in despair. There was no other choice but to remove them myself. And the teeth were barely set.

Were the teeth decayed?

No. There were no cavities or fillings. But below the gums, they were already dead.

So it was a gum disease?

Yes, that was exactly it.

Can you tell me exactly how you pulled your teeth?

They were so loose on my gums that it was just a simple twist or pull. That’s how I did it, no pliers or anything.

And weren’t you afraid of suffering heavy bleeding or an infection?

No, exactly because they weren’t too stuck in the gums.

Are the remaining teeth healthy?

No. Most of my roots are exposed, and my teeth are loose. So they will end up like the rest eventually.

Are you still going to try an NHS consultation?

Yes. If I can’t find an NHS dentist, I will have to remove them, as I did for the others.

How much would you pay for this service in a private clinic?

I have no idea, but it would be pretty expensive. Now I need dentures.

And will you wait for the NHS?

Yes, I can’t pay for a denture, I have to wait for help from the NHS.

How do you feel?

My self-esteem is very low. I’m embarrassed to look like that in front of people. The dentures would mean the world smiling back at me.

“Periodontal disease affects the supporting structure of the tooth. The gingiva works as if it were a bone mat, and each tooth is inserted in a cavity within the bone. It is not common for a patient to extract their own teeth, but in her case , with bone loss, sometimes the tooth is stuck only in the soft tissue part, only in the gums. It’s like what happens with a baby tooth. Extraction is easy. So as not to compromise too much the patient’s self-esteem, the solution it is the immediate prosthesis, which is placed right after the extraction”, explained to PAGE NOT FOUND the dentist Jeter Ribeiro, specialist in Dental Prosthesis, Doctor in Implantology and professor at UFRJ.