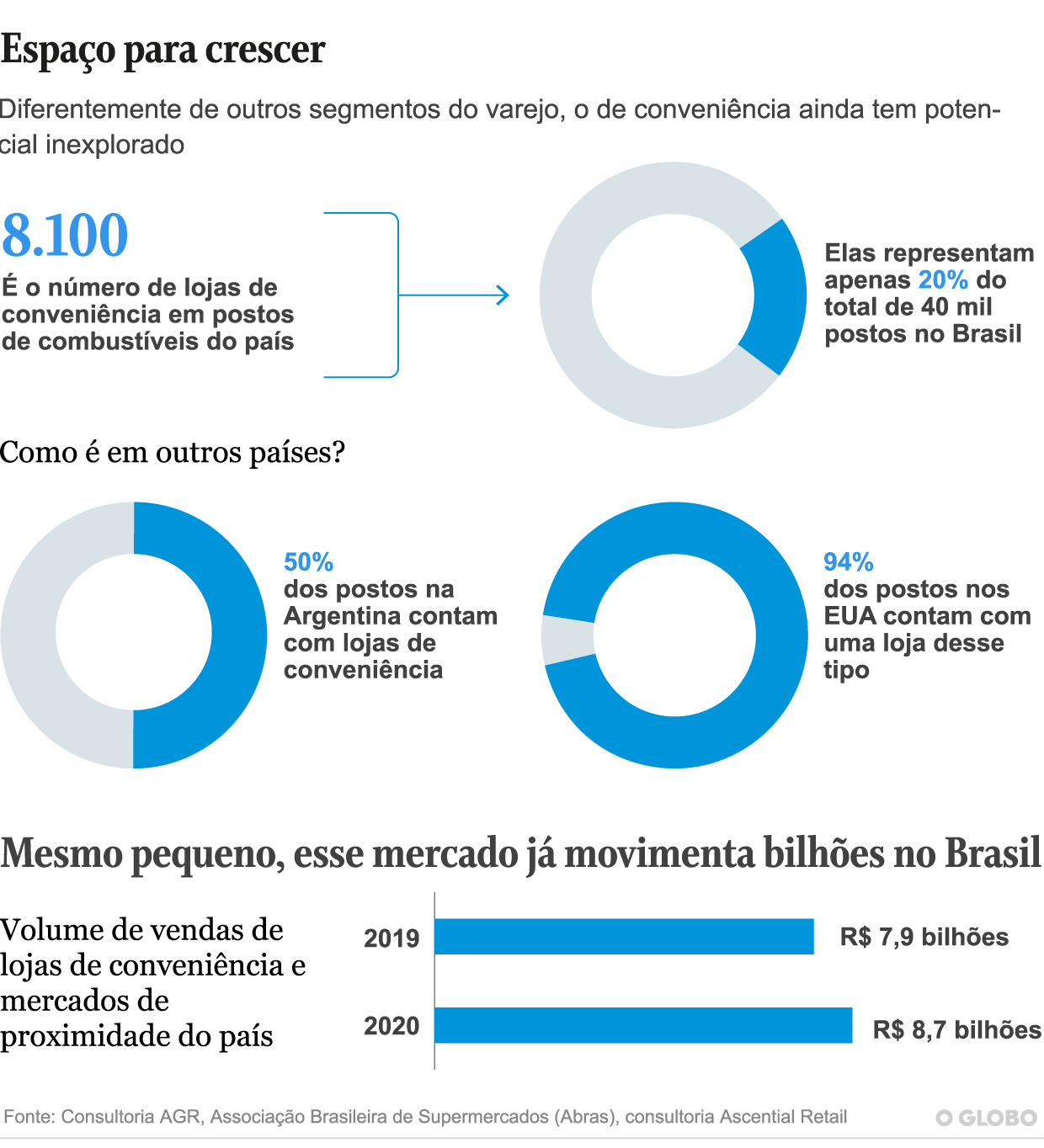 SAO PAULO — The so-called convenience stores, always open around the corner or at the gas station, are no longer the same. The restricted displacements in the pandemic forced a rapid reinvention.

They emerge as one of the main alternatives for the consumer to fill the pantry without going far from home and, with the arrival of new networks in Brazil and a greater bet by fuel resellers and large Brazilian retailers in the segment, they have become the new field of commerce battle, assess experts.

Freight Shot:Retailers improvise to stock shelves in time for Christmas

Mexican Oxxo is the newest company in the sector to expand its presence in Brazil. It will compete with heavyweights, as the most recent association in the sector, between Vibra (name adopted by BR Distribuidora after privatization) and Lojas Americanas.

And also compete with multinationals with brands already consolidated here, such as Carrefour Express and the Pão de Açúcar Minuto and Mini Extra stores. Meanwhile, AmPm, the largest in the sector and which operates mainly in Ipiranga gas stations, plans to open units in condominiums and street stores.

Greater competition comes with a greater offer of products and more technological stores. At gas stations, there are already sales in style drive Thru. Many offer payments by approximation and, in high street stores, even self checkout, at employeeless stands, as well as orders for delivery applications and delivery programs. cashback (cash rewards).

— Convenience stores advanced in digital channels, starting to offer hygiene and grocery items, for example. And they are leaving the gas stations and going to the street – summarizes Ana Paula Tozzi, president of the AGR consultancy, specializing in retail.

In Brazil, in the original segment of stores associated with fuel resellers, there are 8,100 units, covering only 20% of the 40 thousand service stations in the country. In Chile, stores are present in 33% of service stations and, in Argentina, in 50%.

In the United States, 94% of service stations have convenience stores. This market moves around R$ 7 billion a year, but competition is also fierce in street stores, condominiums and bus terminals.

With an operation led by Grupo Nós, which unites the Brazilian Raízen (the country’s largest ethanol producer and operator of the Shell service station network) with the Mexican Femsa, in the beverage sector, Oxxo accelerated its expansion in Brazil.

In the main cities of Mexico, it is difficult to find corners without the presence of the brand, which is already the largest network of proximity markets in Latin America. There are more than 19 thousand units in countries like Peru and Chile.

Retail: From Farm to Hering, Magalu launches fashion retail space within the superapp. And it will have its own brand

The Mexican chain opened its first store in Campinas, in the interior of São Paulo, in 2020. Today, there are 40 in the state. They are small markets strategically positioned in neighborhoods or regions with high circulation, such as subway stations and bus terminals.

They offer a mix of pantry replacement products, from basic food basket items to hygiene and cleaning items, with fast food and cold drinks.

— We continue to believe strongly in the migration of the consumer to the proximity segment, driven by the pandemic, with people buying close to home — says the president of Grupo Nós, Rodrigo Patuzzo.

It enriched its shelves with non-perishable products, personal care and cleaning items. Today, there are 1,145 franchises, in addition to 30 own stores. Until December, Shell Select and Oxxo should add 1,350 points in Brazil.

Race in e-commerce:Amazon launches package to attract retailers in Brazil with free delivery and cash reward

Vibra and Lojas Americanas are still awaiting the approval of Cade, the body that oversees competition, to join a joint venture with an investment of nearly R$ 1 billion.

The two already operate in the proximity trade and the BR Mania and Local brands will be preserved under the same umbrella. The idea is to grow in posts, but also on the streets. BR Mania has 1.2 thousand stores, while Local, by Americanas, has 55 on the streets of large cities.

Round-6, K-pop and the South Korean culture industry fever


Natália Cid, BR Mania’s franchise manager, says that the chain started offering frozen foods and hygiene and cleaning products when she noticed that her ticket purchases were replaced by replacements. In the pandemic, it introduced contactless deliveries and payments.

— We are working with data intelligence and identifying the best opportunities. Let’s close some stores with lower performance — says Natalia.

With 1.8 thousand stores, AmPm, the largest chain of its kind in the country, also started to offer cashback and delivery to build loyalty. And introduced a kind of drive Thru digital. The consumer accesses the online catalog, places the order, pays and picks up or receives the products wherever they want.

— Street stores, shopping malls, terminals and residential and commercial condominiums are also in the plans. There will be 264 new units by 2022 – says Marcello Farrel, director of AmPm in the Ipiranga network.

Marcos Gouvêa de Souza general director of Gouvêa Ecosystem, a consultancy focused on retail, recalls that, in the pandemic, convenience stores won competition from the giants of the e-commerce, that added food and essential items to the portfolio with delivery within an hour:

— The concept of convenience gained new digital formats and entered the dispute with physical stores for faster delivery to the consumer.

He points out the trend in autonomous stores in companies and condominiums. Without employees, they are available 24 hours a day. In Brazil, the novelty was introduced by the São Paulo supermarket chain Hirota, which developed the model as of April 2020.

Two weeks ago, the company inaugurated the 54th unit in a residential unit in the South Zone of São Paulo and intends to reach 64 by the end of the year. The resident Arlene Mendes, 54, went to learn how to buy without the help of sellers:

— I liked not having to go out on the street to shop.

The small stores are installed in condominiums with up to 400 apartments and offer up to 500 products, from charcoal for the barbecue to drinks. The resident opens the store with his cell phone, which reads a QR code, says Helio Freddi Filho, Hirota’s expansion director:

— The customer enters, makes purchases and pays for the app. The employee only shows up for cleaning and refueling. (Edilson Dantas collaborated)