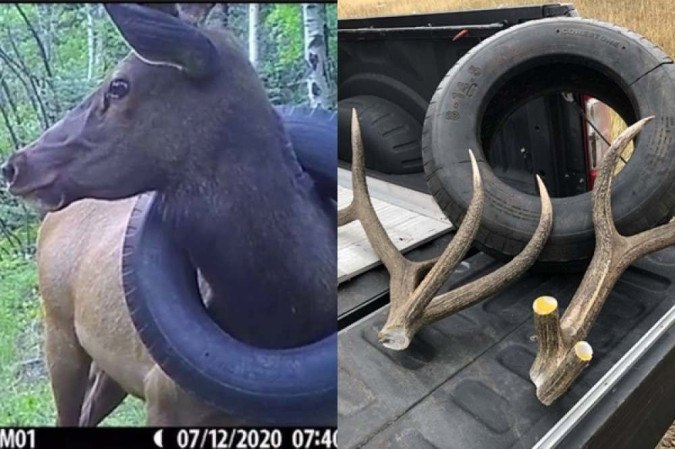 A deer, which had been living for two years with a tire stuck around its neck, was finally rescued by forest guards, who removed the object. The animal was in a park in Colorado, United States, and, after several attempts, it was released last Saturday (9/10).

On Colorado Parks and Wildlife (CPW) Twitter, the park explained that it was necessary for the animal to be sedated and that it was difficult for the steel in the tire bead to be sawn off, causing the animal’s horns to be sawn off. The park also explained that time was short, as the deer was already under the influence of the tranquilizer, and that the antlers will grow back.

“The saga of the moose with a tire around its neck is over. Thanks to residents south of Pine Junction on CR 126 for reporting its location, wildlife officials were able to free it from that tire on Saturday,” the park said.

The saga of the bull elk with a tire around its neck is over. Thanks to the residents just south of Pine Junction on CR 126 for reporting its location, wildlife officers were able to free it of that take Saturday.

Why we cut the antlers off & not the tire:

1? We tried, sawzall was slow going thru steel in the bead of the tire
two? The animal was under anesthesia, time was limited
3? Does not harm the elk, will grow back next year
4? Reduces the chance the bull would be harvested this year pic.twitter.com/C24rgd5krs

For two years the animal was monitored by the park and it was found that the tire did not affect the deer’s ability to eat and drink. Some images were released so that the population could alert the guards if they saw the animal. After a complaint, they managed to find him and remove the tire.

This 2020 video with wildlife officer Scott Murdoch discusses the possibilities of how the tire got on there and what it would take to remove the tire. https://t.co/Frwi3kaXlc