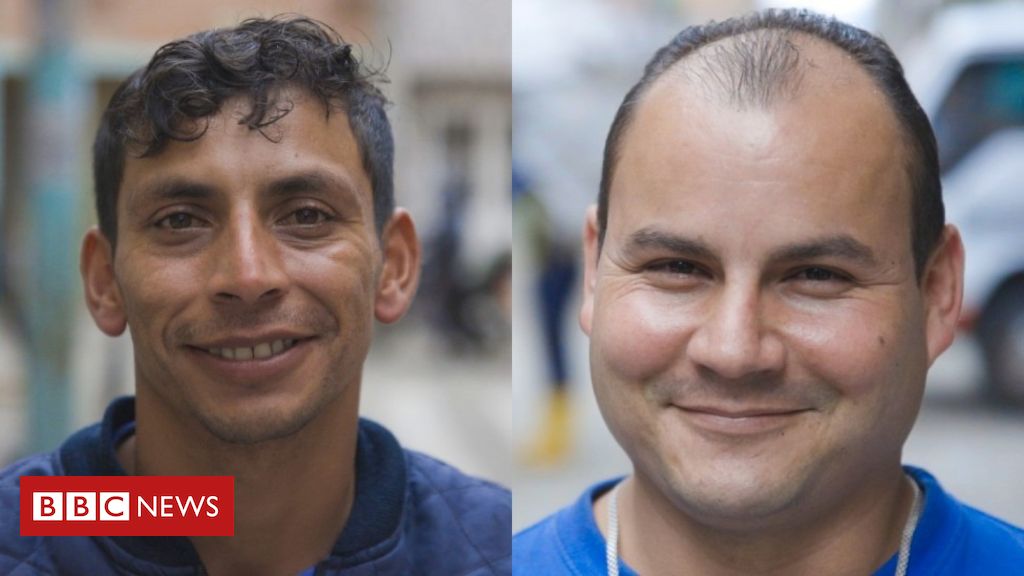 “Welcome to Calma, a listening line for men,” says a male voice, soft and slow. “We are here to listen and guide.”

Minutes later, a psychology specialist from Bogotá’s city hall joins the call to assist men in the Colombian capital who may be experiencing some kind of anguish.

In ten months of the existence of the Calma line, almost 2,000 men sought care. About 200 of them went through 10 free and personalized sessions to which they are entitled, just because they are willing to analyze their macho emotions, thoughts and attitudes.

“I was becoming the macho I never wanted to be,” baker and artist Alex Rodríguez, a 31-year-old Bogotá resident, tells BBC News Mundo (the BBC’s Spanish service).

“Since I was worried that I was feeling that jealousy typical of a toxic man, I called the hotline and Diana, a psychologist, told me that jealousy is normal, that we all feel, and that the important thing is to know how to process it.”

Most men who call Calm do so in the midst of a fit of jealousy.

“We found that not only among Colombian men, but also Colombian women, jealousy is something we are very attached to,” says María Fernanda Cepeda, a gender specialist for the Bogotá city hall.

Undersecretary of Citizen Culture at City Hall, Henry Murrain adds: “Behind the man who can do everything, who controls everything, there is a man who is deeply insecure and tormented.”

“This comes not only from jealousy, but from an idea of ​​exclusivity and control of the woman, from which the deepest rages are aroused and can make the person violent, something that, most of the time, they don’t want.”

In Argentina, Mexico and Peru, among others, there are programs to assist men who commit gender violence, but most of these initiatives focus on perpetrators who have already been convicted or are promoted by civil organizations.

The Calma line, on the other hand, invests in preventing sexist attitudes and part of the government.

“There is a lot of effort in empowering women and working with perpetrators, but our approach, which is anthropological in nature, seeks to prevent sexist violence through understanding and paying attention to its emotional causes,” explains Murrain.

Men ‘tormented’ by the role of ‘provider and conqueror’

In charge of the project at the city hall, Henry Murrain researched the machismo of Colombians in two cities: Barranquilla and Barrancabermeja.

“Through several studies, we found that the Colombian, although I think this is a very Latin American facet, is plagued by a series of burdens imposed by his condition of male provider and conqueror”, he points out.

“They cannot process the emotions of guilt, anger and helplessness calmly and transparently, but rather with violence and arrogance.”

Local government surveys show that 66% of domestic violence is committed by the partner, that 55% of cases are attributed to jealousy and that 76% agree that men do not know how to control their emotions.

Cepeda adds: “The expectation for men is that they act in accordance with the idea of ​​masculinity, of the man who provides and does not deal with the sentimental”.

“It’s a very difficult identity to win and very easy to lose, because they have to constantly show that they are men, that they provide, that they conquer, that they don’t cry.”

The anthropologist asks: “How can we expect men not to engage in violence if we are constantly asking them to be supporting this macho manhood?”

Oscar Eduardo López, a 24-year-old Bogotá resident who works in music and journalism, was not able to deal with his girlfriend’s infidelity when he called the Calma hotline.

“The guilt of feeling that I couldn’t respond to my partner’s wishes was causing me very deep problems,” says López. “When I went to get help from friends and relatives, I heard things like: Get over it; that’s life, turn the page.”

When talking to an expert from the Calma project, the young man says he found a neutral and patient interlocutor who made him understand “that the breakup and the infidelity were not my fault, but her decision that had little or nothing to do with what I did. “.

Unlike other Latin American capitals, Bogotá ranks first in Colombian domestic violence. Only Casanare, Arauca and Meta have higher rates of this type of violence.

“Despite all the progress Bogotá has made in terms of safety, environmental awareness and urban behavior, there is a debt when it comes to domestic violence,” explains Murrain.

According to official data, 5 out of 10 men in Bogotá grew up without a father as the main male figure.

Cepeda points out that “when the father is not absent, he is violent”.

“It’s a public health problem,” adds Murrain. “We know that emotions like jealousy are indicators of violence. Therefore, with proper and professional treatment of these emotions, we can prevent violence.”