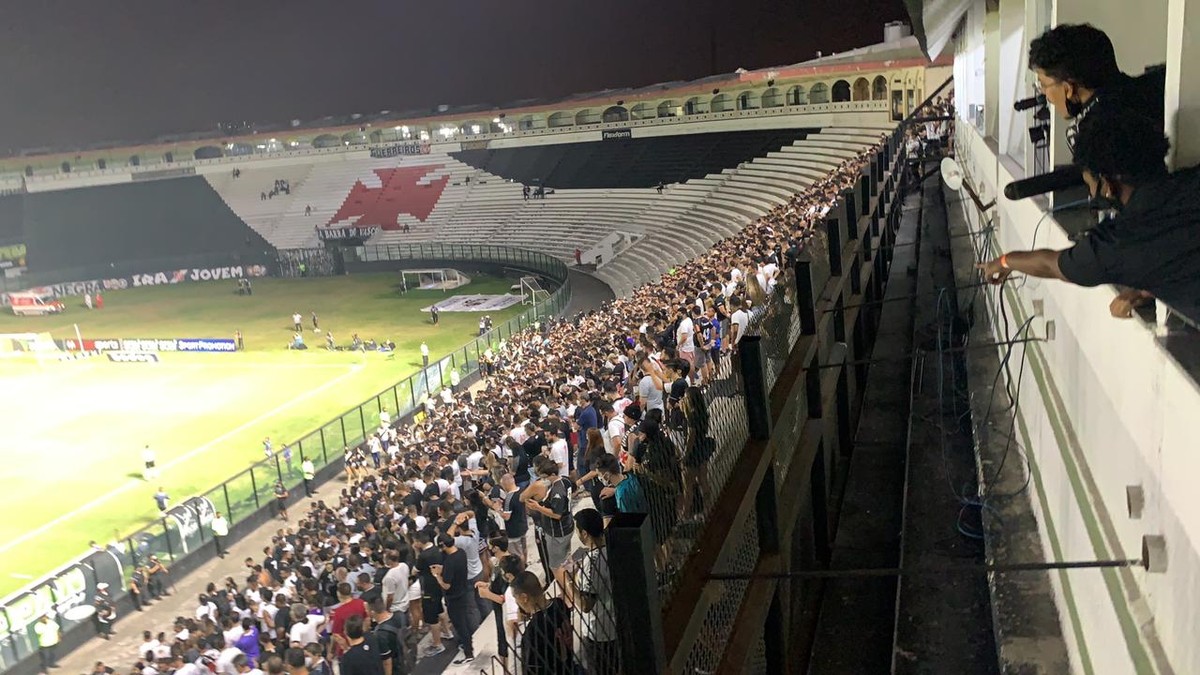 Although there was an expectation that Vasco will put up for sale 11 thousand tickets for the game against Coritiba, scheduled for Saturday, at 4:30 pm, in São Januário, the club will still not work with 50% of the total load, a number that is currently allowed by the Secretariat Municipal Health. The main impediment at the moment is a work being carried out at the stadium.

The board of Vasco has put up for sale 7,700 tickets for the clash with Coxa. The club’s CEO, Luiz Mello, explained the progress of the works and why it is still not possible to work with 50% of the maximum load.

+ Embraced by Diniz and with Felipe’s blessing, Riquelme starts to become a reality at Vasco

– We have been carrying out structural maintenance works for some time in São Januário, and they are being carried out by sectors. We started with the social, then moved to the sector of the stands on the opposite side of the social and later we went to the rest of the horseshoe, where the marquee is. We would have 11,000 if we released the horseshoe, but we ended up not having enough time. Even to have a little more comfort and security for the fans, we are opening up both sides.

In the horseshoe area, behind the goal, there was no presence of fans against Goiás — Photo: Marcelo Baltar

Mello points out that Vasco is based on the game against Goiás, in which the load was also 7,700 tickets. As there is no guarantee of sold out tickets, the club bets on repeating the strategy adopted at the last opportunity as home team.

– There’s another operational issue. In the first two games, we didn’t have maximum occupancy. The more I open areas, the more turnstiles, security guards and operatives I will have to hire. That way it’s more efficient. For Vasco to plan better, we have not yet opened for 11 thousand. With 7,700, we have already performed the first operation. Later on, we will see what will be possible.

Even with a 15-day gap until the next game as principal, the Vasco CEO claims that it is still not possible to guarantee a load of 11,000 people for the duel with the CSA, scheduled for October 29, at 9:30 pm (GMT), in Saint Januario.

– We study the scenarios week by week. We have interventions on the lawn, we still have scaffolding. Behind the goal, in the horseshoe, in the vip area too, we still have some maintenance to be completed.

Although Vasco’s fans have not sold out after the public returns to the stadiums, Luiz Mello is optimistic about next Saturday. For the manager, the achievement by Vasco of the adoption of hybrid access will be a facilitator for fans interested in going to the stadium.

With the new City Hall decree, those with a complete vaccination schedule do not need to take an exam to enter São Januário. The mandatory negative test remains for those who took only one dose of the Covid-19 vaccine and for those who took the second dose less than two weeks ago.

– For the areas that are cleared, we are opening 50% of the stands and 50% of the social. We believe that, with the conquest of hybrid access, fans will have easier access to the stadium. We’ve been trying to make it as easy as possible. In the second game, we lowered the ticket from the stands. We increased laboratory network. Now against Coritiba, we reduced the price of the social, we increased even more the number of accredited laboratories, we also increased the number of ticket exchange points.

– The fan with a complete vaccine cycle now has a lower cost. From the moment we give momentum, we work for the game to be sustainable, financially egalitarian. All games from all clubs have been deficient, but we work for Vasco’s to be the most balanced financially.

Luiz Mello has been Vasco’s CEO since the arrival of Jorge Salgado — Photo: João Pedro Isidro/Vasco