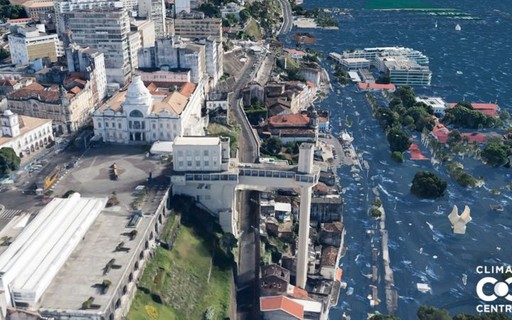 How will the rise in global temperature and the rise in sea level actually affect different regions of the planet?

That was the question that guided a survey conducted by Climate Central, a non-profit organization based in the United States, in partnership with Princeton University, also in the US, and the Potsdam Institute for Climate Impact Research, in Germany.

Learn all about artificial intelligence, corporate venture, sustainability, cybersecurity and diversity at FICE, the largest innovation and entrepreneurship festival in the country. Sign up for free at fiction.globo.com

The work, published in the scientific journal Environmental Research Letters, identified regions of the world that could suffer “unprecedented” floods if policies to combat climate change are not put into practice now by countries.

According to the study, hundreds of coastal areas, which are currently home to more than 1 billion people, are at risk.

Scientist Benjamin Strauss, leader of Climate Central and lead author of the article, points out that “world leaders have the opportunity to help or betray the future of humanity with their current decisions on climate change.”

“Our research, and the images created from it, illustrate what lies behind the Glasgow climate talks. Robust and immediate measures for a clean and climate-safe world economy can help billions of people and preserve cities and nations for the future. Today’s choices will define our path,” added the expert.

Citing Glasgow, Scotland, Strauss makes reference to the United Nations Conference on Climate Change, COP-26, which will be held in this city between October 31 and November 12, 2021.

Anders Levermann, professor of climate system dynamics at the Potsdam Institute in Germany, says that “sea level rise is a threat to our heritage.”

“And not just to our ancient heritages, but to the cities we live in today. These are the places where the actions of today prepare the world for the next generation,” he added.

And there is a considerable difference in what can happen to these regions as the temperature increases: if there is an increase of up to 3 °C in the coming decades (compared to the pre-industrial average), the risk of damage is practically the double what would be seen at a slightly smaller rise, between 1.5 °C and 2 °C.

In the most optimistic scenario, this 1.5 °C increase would happen if we gradually reduced the emission of greenhouse gases, until we reach zero emissions in 2050.

The 3 °C rise will be a reality if the current pace continues as it is or even worsens in the coming decades.

To illustrate the scale of the problem, Climate Central has assembled a series of images, with the help of editing programs and satellite photos, which reveal what around 100 coastal cities in 39 different countries, including Brazil, can look like.

The hardest hit places are in Asia: China, India, Indonesia and Vietnam would have parts of their territory affected, where millions of people currently live.

The projections, which take into account calculations made by the Intergovernmental Panel on Climate Change (IPCC), are part of the Picturing Our Future project.

Effects of increased temperature in Brazil

In the images below, drag the arrow to the sides and see how some Brazilian cities may be affected by the increase in temperature, according to the Climate Central study.

On the left, it is possible to check the situation if the elevation is only 1.5°C. On the right, the projection takes into account a 3°C rise in the thermometers (and, of course, the effect of this on rising sea levels).

The first example on the list is Salvador, capital of Bahia. The increase of 1.5°C would already make the sea advance over part of the center and other neighborhoods of Cidade Baixa. Now, if the temperature rise reaches 3°C, the image shows that the entire area where the Mercado Modelo is located up to the front of the Elevador Lacerda would be taken by water.

A similar scenario can be observed in the neighborhood of Casa Amarela, in the North of Recife. At 1.5°C, it is possible to observe a possible increase in the level of the Capibaribe river. At 3°C, most of the streets and avenues would be taken over.

One of Fortaleza’s postcards, the Mucuripe Lighthouse is one of the only structures to remain untouched by the ocean waters with a 3°C increase in temperature. But, even with an increase of 1.5°C, the sea would already cover the beaches of Titanzinho and do Futuro.

On the banks of the Jacuí River and on the shores of Lake Guaíba, the Usina do Gasômetro, in Porto Alegre, would also be inaccessible with the rising waters in the most pessimistic scenario. And, even in the optimistic possibility (of an increase of 1.5°C in temperature), it is already possible to notice some changes in the configuration of the state capital.

With the 1.5°C rise in temperature, the Aqueduto da Carioca (the popular Arcos da Lapa) is little affected. Now, with the addition of 3°C in the thermometers, it is already possible to see some flooding at the bottom of the map.

And in the world?

In Havana, Cuba, Dhaka, Bangladesh and Lagos, Nigeria’s capital, Climate Central’s projections show a drastic scenario. The 3°C rise could partially or totally submerge buildings and squares in the heart of cities.

You can check the 180 projections and images (which include other Brazilian scenarios) on the project’s official website.

This article is part of the #UmSóPlaneta initiative, a union of 19 brands from Editora Globo, Edições Globo Condé Nast and CBN. Discover the project here.