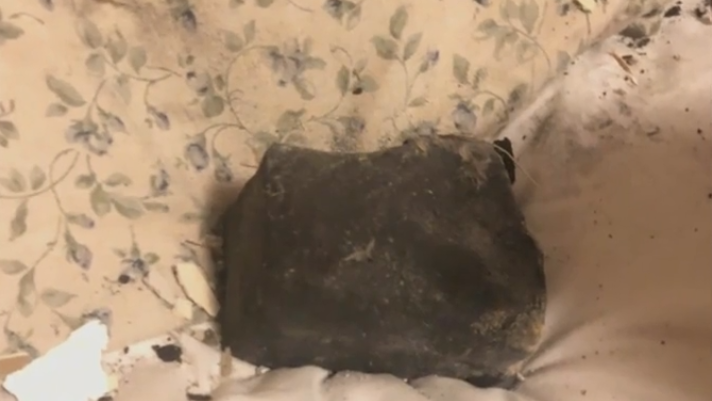 Can you imagine waking up in the middle of the night with the sound of a stone crossing the ceiling of your room, landing a few inches from your bed? That’s exactly what happened to Ruth Hamilton, resident of the Canadian municipality of Golden, on the last day 3. But the nature of the invader makes the story even more surprising: at around 2 kg, the object was nothing less than a meteorite. Despite the scare, Ruth is doing well.

In an interview with Canadian broadcaster Global News, Ruth reported having woken up to her dog’s bark a few seconds after the hitherto unknown object crossed the roof and ceiling of her room. “I’ve never been so scared in my life,” Hamilton said. Not knowing how to handle the situation, she immediately called the local police and, during the call, noticed a rock slipping between the pillows.

The stone was then analyzed by experts from Western University. According to them, everything in the story matched other accounts of the fall of a meteorite in the region. “The fact that this glowing fireball crossed the sky at basically the same time made the case very relevant,” Western astronomy professor Peter Brown told the CBS portal.

In 1954, Ann Hodgens, an Alabama resident, was the first known person to be hit by a meteorite in her home. At the time, a space rock weighing about 3.8 kg passed through her roof and hit her in the hip. Fortunately, she survived the accident with a massive bruise and went on to become a sub-celebrity in the pre-internet world, making the cover of Life magazine that same year.

Hamilton plans to keep the space rock as a reminder of that unusual night, after the meteorite has been thoroughly analyzed by the team of experts — after all, these objects are valuable for understanding the Solar System. “You think you’re sleeping safely in your bed, but you could be shot by a meteorite, apparently,” added the Canadian.