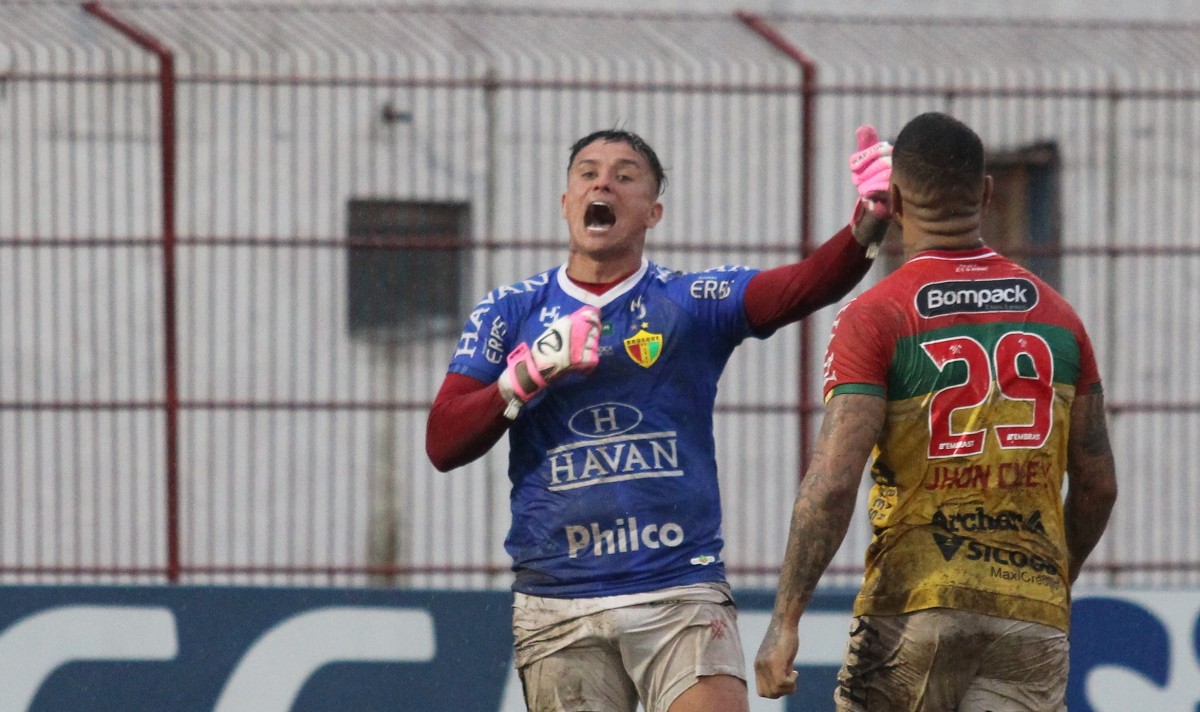 In a completely crazy match and with a lot of mud, Brusque beat Remo by 3-1 on the afternoon of Friday, 15, at Augusto Bauer stadium, for the 30th round of the Series B of the Brazilian Championship. Leão opened the scoreboard in the first half with Pingo, but Marreco turned in the second stage with Luizão and Thiago Alagoano, and expanded with Edu, who also got a penalty in extra time. The quadricolor goes to 35 points, while Remo reaches four matches without a win.

Remo arrived with danger in two moves by Lucas Tocantins. In the first, the 19 shirt started at speed on the left and invaded the penalty area. When crossing, Ruan Carneiro closed the angle well and defended. The ball went out in the corner.

In the second, at 13, Lucas Tocantins had space, this time on the right, and crossed. In the area, Pingo went up and headed well to open the scoring. pink in the first half.

The quadricolor tried to launch the attack to tie soon after, but could not find conditions to have clear submissions. Augusto Bauer’s lawn only made the game difficult for both teams.

On minute 17, Victor Andrade arrived in the area on a counterattack and Claudinho charged. Remo forward asked for a penalty, but the referee let it go.

Brusque managed to cause great danger at 19. Jhon Cley cleared the edge of the area and kicked low. Thiago Coelho stretched all the way to make a great save. At 29, the Brusquense midfielder headed in Airton’s corner kick at the first post, but the ball went over the top.

In the second half of the first half, the crowd at Augusto Bauer began to get angry with the decisions of referee Vinícius Gomes do Amaral. At 37, team and fans asked for a penalty on Toty. Rodolfo Potiguar had opened with Thiago Alagoano, who served Toty in the area. The shirt 20 was loaded from behind and the referee did not score anything. Moments later, Jhon Cley would go face to face with Thiago Coelho, but Marlon took the ball at the last moment and took it out for corner.

At 46, Pingo was hit by Zé Mateus and fell down. The ball stayed with Remo for several seconds, and only when Brusque tried to set up the counterattack the game was stopped, to the fury of players and fans.

At the final whistle, the referee hesitated to finish the first half. After a corner kick, Zé Mateus won the ball at the entrance to the penalty area, but the whistle was given anyway, after some doubt. The arbitration returned to the locker rooms under the cries of “shame”.

• Want to receive News over the Brusque Football Club it’s the sport of the region in your Whatsapp? Click here and join the new newspaper group!

In the first few seconds, Felipe Gedoz broke through the middle and passed to Lucas Tocantins, who ended up scoring in a touch over Ruan Carneiro. Assistant Maíra Mastella Moreira signaled an impediment.

Brusque didn’t take long to start the turn. At nine, Jhon Cley was fouled on the edge of the area. In the next minute, Airton charged and raised with category to Luizão, who headed hard into the goal.

At 12 came the second goal. Jhon Cley raised the ball in the area, Garcez swung in the middle and Thiago Alagoano, who hadn’t been playing a good game, shot with his left foot in a beautiful finish. Remo players contested a lot, asking for an arm touch from Garcez. Defender Marlon was yellow for complaint.

Superior in the game, the quadricolor followed on top, looking for more goals. At 26, Edu asked for a penalty with a hand touch from Thiago Ennes in a dispute inside the area. Moments later, the referee was called by the VAR, went to the booth, saw the move and signaled the penalty.

In the collection, Edu did not do well and Thiago Coelho was competent to land right and avoid the third goal from Brusquense, at 29. At 31, the quadricolor still hit the rowing post.

In the final minutes, the match was very disputed, amidst the mud that had become Augusto Bauer’s lawn. Remo surrounded Brusque’s area, but without getting clear finishes, any chance of a goal to make everything the same. At 44, in a beautiful counterattack, Edu tried to reach the ball in the area, but fell and got a yellow card for simulation.

But the Emperor’s goal could not be missed. In counterattack, Brusque caught Remo’s defense messed up. Bruno Alves crossed with category and Edu headed as required by the manual to score the third goal.

Everything seemed to be defined, but at 49, Ruan Carneiro committed a penalty on Rafael Jensen, but in the throw, he was accidentally hit in the head. The ambulance entered the field, leaving what was already a mire in Fenajeep climate. The goalkeeper lost consciousness for a few seconds, managed to get up, but had to leave.

Edu became the goalkeeper of the quadricolor, which had no more changes. Felipe Gedoz was on the ball, charged, the Emperor defended, and then Jensen invaded the area to score. The goal was disallowed for invasion.

Receive news straight on cell phone entering the groups of The Municipality. Click on the preferred option: