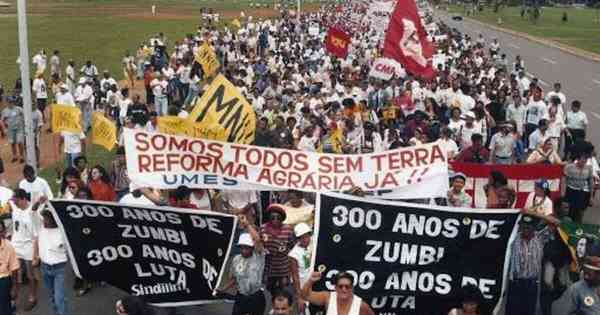 Historians reinforce that the date was chosen by a group of activists from Grupo Palmares, which held an event in 1971 at Clube Nutico Marclio Dias, in Porto Alegre, Rio Grande do Sul. “This group decided that the date would be remembered in the only because of Zumbi’s death, but as a historically important date for black people,” says Cleudiza Fernandes de Souza, a doctoral student in the Postgraduate Program in Social History at the Federal University of Rio de Janeiro.

However, it took 32 years for the date to be institutionalized. Only in 2003, the 20th of November, which alludes to the death of Zumbi dos Palmares, was included in the school calendar. It became a national holiday eight years later. The National Day of Zombie and Black Consciousness was instituted by Federal Law 12,519, of November 10, 2011, signed by President Dilma Rousseff.

The historian considers that the legitimation of an ephemeris by the State is important even to consolidate public policies, however, it is essential to highlight all the mobilization of the black movement that preceded it. Even because institutionalization is the result of this struggle, since there were groups against the entry of the date on the national calendar. “History is a space for narrative disputes and disputes for power as well,” says Cleudiza.

The delay in institutionalization has to do with political conditions in the 1970s, since the country was under the military dictatorship. Despite all the repression, black activists carried out these discussions regarding ethnic-racial issues. During the period of redemocratization, they managed to broaden the discussion, including participating in the Constituent Assembly for the elaboration of the 1988 constitution.

“These spaces of power are slow to recognize struggles that are being carried out at the bases of social movements. As much as there is recognition by the state, the institutional way in which racism is built brings this difficulty, brings this delay in these recognition of dates and milestones by the black movements”, ponders Cleudiza.

Mobilization of the black movement

Wlamyra Albuquerque, professor at the Department of History at the Federal University of Bahia, highlights that November 20 is the result of the mobilization of the black movement, which in the 1980s managed to give visibility to the weight of racism in Brazilian society. “Black Consciousness Day is deeply related to a national project designed in the midst of political opening, after the period of the military dictatorship. The day was created to talk about how fundamental anti-racism is in democratic societies”, he highlights.

In this way, November 20th became a national date for denouncing inequalities, for anti-racist protest, and for celebrating black cultures in Brazil. “The day of black conscience about Brazil dreamed of democracy and racial equality”, says Wlamyra.

The historian argues that, in 2021, the date should be taken as a commitment by the country to build this equality through public actions.

On this date, the unequal numbers that affect the black population are remembered. The Institute for Applied Economic Research (Ipea) demonstrated that racial income inequality in Brazil persisted between 1986 and 2019.

“The genocide of black youth is one of our biggest problems and it needs to be faced with social responsibility, betting on a world in which differences do not mean inequalities. It is not acceptable to naturalize the murders of young black people in disputes between rival groups involved in drug trafficking and the police, for example”, he exemplifies.

The recognition of the 50th anniversary of the date is part of a movement, in the social sciences, to recover characters that were made invisible in official history. Cleudiza highlights two characters in this story of mobilizing the black movement who, for many years, were forgotten: professor Hemetrio dos Santos and researcher Beatriz Nascimento, both linked to the anti-racist struggle and the struggle for education. “Two subjects are very important to understand how our trajectories were narrated and how they are currently being conceived”.

Hemetrio was born in 1875 in Maranho and worked as a teacher at the beginning of the republican period of the Escola Normal do Distrito Federal, which, at the time when Rio de Janeiro was the capital of Brazil. He also taught at Colgio Pedro II and Colgio Militar.

“An important character who, for many years, did not enter the pages of textbooks. Despite not being nationally recognized, he is a fundamental character to understand the anti-racist struggle and the struggle for education.” One of its achievements was the creation of a free normal school, which received a popular public, many of them from black families.

The importance of black women

Beatriz Nascimento was born in Sergipe, in 1942, into a family of nine brothers. He graduated in history at UFRJ and focused on the study of quilombos in Brazil. “Beatriz Nascimento positives the term quilombo, as it amplifies the notion of what a quilombo would be. It brings the notion that the urban quilombo, which historically was not mentioned so much, quilombos and black associations could also occur in urban spaces.

“These are black women who vehemently contributed to the awareness of a milestone that highlights the protagonism of the Brazilian black population, in an anti-racist perspective, denouncing the existing myth of racial democracy, so widely naturalized in our historiography”, says Renata.

Other black intellectuals were also important for the positive construction of the memory of the Brazilian black population: Llia Gonzalez from Minas Gerais (1935-1994), gacha Luza Bairros (1953-2016) and Antonieta de Barros from Santa Catarina (1901-1952).

*This report composes the Occupation of the Network of HistorianXs NegrXs in communication vehicles throughout Brazil on November 20, 2021.