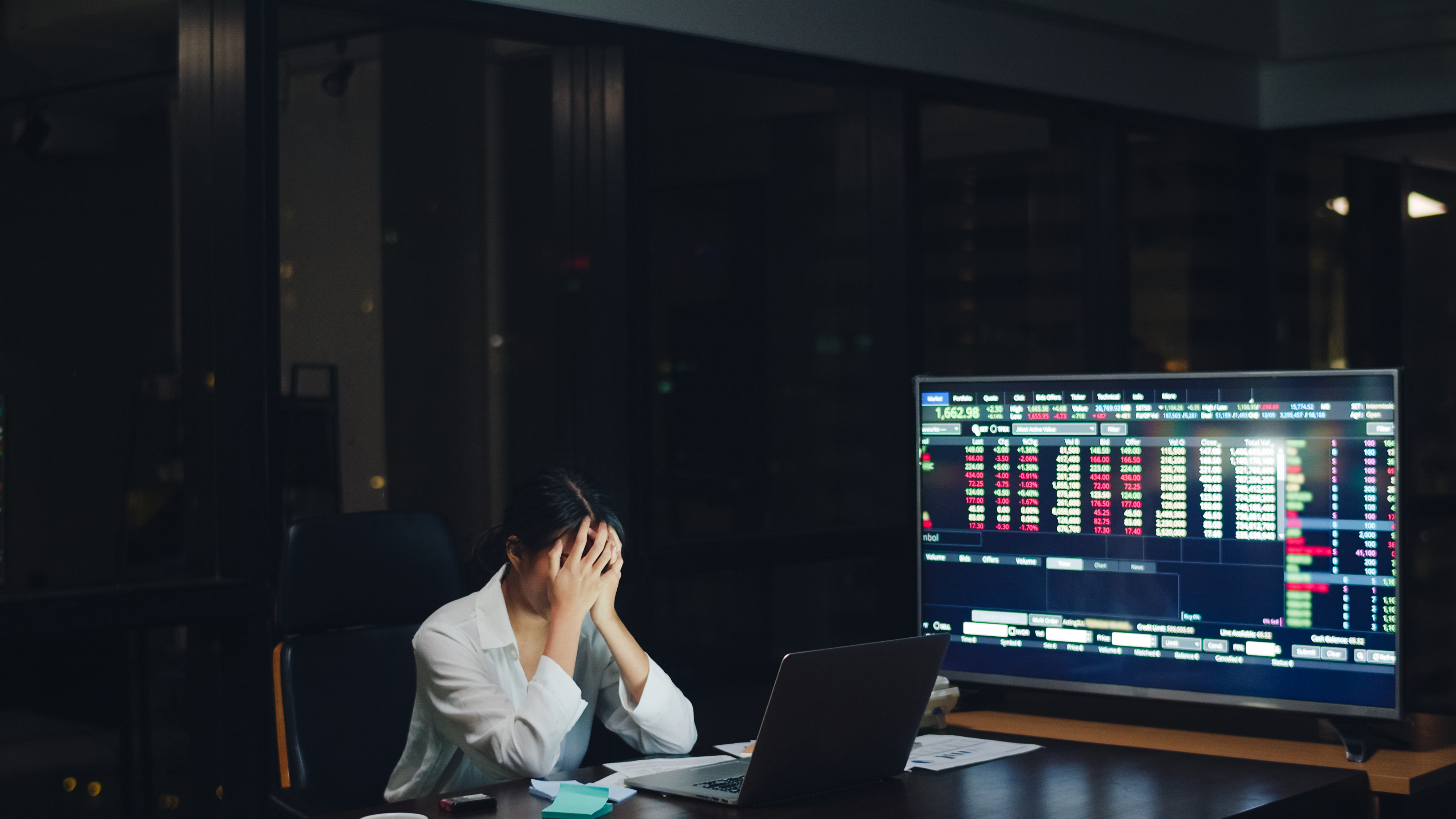 It’s getting repetitive. Yesterday, the Ibovespa closed the session at its lowest of the year, at 102,426 points, the fourth consecutive day of decline. Until the end of the last session, the performance of the index was negative by about 14% in the accumulated result for 2021.

And worst of all: Brazil is missing the tram. The international market is renewing historic highs, especially in the United States. The S&P 500 has risen 27% since January, leaving the Ibovespa far behind.

The biggest Brazilian stock index, bathed in commodities, had everything to emerge this year.

With the real devalued and raw materials at a high level – see the growth in inflation around the world – companies should be benefiting and, consequently, the market pricing this scenario.

But that’s not what’s happening. Currently, the Ibovespa trades at a price/earnings multiple at the house of six times, almost four times lower than in January of this year.

The last moment when the ratio between the quotation of companies on the Ibovespa and their profit for the previous 12 months was so low was in October 2008, amidst the hurricane of the crisis in the subprime.

The mantra of “fell, bought” is no longer followed to the letter, as it was last year. Opportunities are crystal clear, although (major) risks are on the agenda.

Comparison between Ibovespa and IVVB11, ETF that replicates the S&P 500, in the last 12 months

The supposed dichotomy between social and fiscal responsibility

Years ago, one of the biggest fears about Brazil was linked to the country risk. In this sense, one of the best credit risk indicators vis-à-vis the international market is the Credit Default Swap (CDS).

Although volatile in recent months, these contracts are not the main concerns at the moment. Brazil needs to deal with its internal ghosts.

As former Finance Minister Pedro Malan once said, our country is a place where even the past is uncertain. This year, the precatório bill — which are state debts on old losses, in lawsuits running in court — caught the attention of investors.

The difficulty of finding a way out of all the bills for the coming year, such as new social benefits, has made the government look for ways to expand the available space within the spending ceiling.

The PEC dos Precatórios, which changes the fiscal rule, seeks to free up space for around R$ 90 billion in expenses, dividing judicial debts in installments and altering the way in which the government’s spending limit is corrected.

Economy Minister Paulo Guedes said that the measures were necessary to make the aid of R$400 a month to the poorest families feasible and asked the market for a waiver (apologies for not meeting a goal).

The traditional backstage frenzy in Brasília has weighed heavily on the Ibovespa.

With the breaking of the spending ceiling, which was seen as an anchor of public spending since its inception in 2016, a climate of uncertainty is created. On the one hand, the Brazilian “fiscal morality” is deflated, causing the flight of dollars and putting even more pressure on the national currency.

On the other hand, more public spending means more inflation, since the monetary base (total money circulating in the economy), in theory, increases.

Currently, around 33.95% of the Federal Public Debt (DPF) is pegged to the Selic, or floating rate. This is equivalent to BRL 1.86 trillion. More interest rate, more public debt.

To control inflation, the government has to raise the interest rate in a tightening of monetary policy. With Selic at a higher level, the country’s economic growth is sacrificed, reducing incentives for consumption and investment in production.

The fate of companies on the Stock Exchange is not the same as that of the Gross Domestic Product (GDP), but the macroeconomic situation inevitably influences it.

The increase in interest rates is a consequence of a local scenario which, in turn, is also impacted by the global situation. From the top down, the influence comes to companies and how they relate to customers.

In general, there are some impacts of interest rate hikes on companies and, consequently, on their performance on the Stock Exchange. Some are:

The financial expense increases, harming the numbers of companies in the period. Depending on the sector, profit is harmed, causing analysts to revise the projections.

With fewer resources to be distributed to shareholders, some investors may rotate their portfolios, leaving some shares behind.

When the market assesses a company’s fair price, the long-term interest rate (not the Selic), priced by the market, is used as a discount rate on the money supposedly generated in the future.

This discount rate being higher, it is natural that the multiples of companies retreat and, later, the prices negotiated today follow the negative estimates.

With inflation on the rise, the reality is that the population’s purchasing power is lower. With a short budget, the demand in the economy is retracted, harming companies that mostly depend on the local scenario, such as those linked to services.

In addition, Brazilian families are highly indebted. The number of households in debt in November was the highest in 11 years, according to the National Confederation of Commerce, Goods, Services and Tourism (CNC).

Last month, 74.6% of family groups in the country had debts to pay in the coming months, among the various types of indebtedness. Default, however, is still under control..

From 2019 until now, when the interest rate dropped to its historic low, the Exchange quickly went from 500 thousand CPFs to almost 4 million investors.

Brazilians saw their income in fixed income collapse and, as a result, sought better alternatives in variable income. Often, unaware of the risk he was taking.

The search was often not for investment in businesses that generate long-term value, but rather for immediate return on capital. Now, with fixed income becoming attractive again in nominal terms, the flow is reversed and the stock market suffers.

According to the Brazilian Association of Financial and Capital Market Entities (Anbima), fixed income funds led the sector in funding in October, attracting R$ 17.4 billion. The accumulated result for the year is R$ 255.2 billion.

Does such a drop in the Ibovespa make sense?

Given these reasons, the context is, yes, delicate and there’s a reason everything has fallen so far.

At a time when Brazil was on its way to becoming “normal”, with lower interest rates and inflation like the rest of the world, the pandemic – followed by an early presidential election with populist aspirations – she shelved the growth plans.

Panic has been widespread, although this is not the first time this has happened.

In an interview about your book Bitter Lessons, released in May this year, economist and former president of the Central Bank, Gustavo Franco, said that “if you stay out of Brazil for a week, everything changes. If you go away for seven years, nothing changes”.

Being out of any crisis in a few moments of its history, Brazil sometimes flirted with bankruptcy. And it already happened! In 1987, during José Sarney’s government, the country declared a moratorium, or default on its foreign debt.

But, the situation has changed drastically. Today, the situation in Brazil is still distant from that of neighboring Argentina, for example, which does not even have monetary stability and has already declared a moratorium ten times. The real, however staggering, saved the country from hyperinflation.

Moments with these characteristics usually represent excellent investment opportunities for those with a very long-term horizon, even more so with the diligence of finding companies that trade below their fair value — despite all concerns.

This has been the view of foreign investors. They placed BRL 12.4 billion net on the Brazilian stock exchange in October, with a positive balance of BRL 54.7 billion in the accumulated result for the year.

In 1810, the once famous London financier Nathan Rothschild said the phrase “buy to the sound of cannons, sell to the sound of trumpets”. O Ibovespa it has rarely been so cheap.