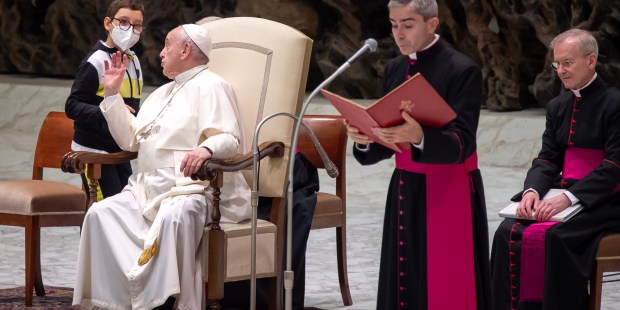 The mother of Italian boy Paolo Bonavita, who on October 20 took the stage in the Sala Paul VI, in the Vatican, told the CBS news network that Pope Francis “worked a miracle” on her son.

10-year-old Paolo enchanted the world by taking the stage in the Vatican audience hall, walking spontaneously to Pope Francis and showing special interest in his white skullcap.

The Pope was very attentive to the boy, kissed his cheek and asked for a chair for the little one to sit beside him. In addition, Paolo got a skullcap similar to the Pope’s, which made him remarkably happy.

The boy has autism and suffers from epilepsy. He had gone to Rome with his mother, Elsa Morra, to undergo medical examinations for a suspected tumor or multiple sclerosis. According to the mother, the very fact that Paolo climbed the stairs of the audience room to reach the Pope was already “a real gift”.

“This can’t be happening,” Elsa told CBS News, adding the reason: the doctors, she said, were “almost certain” that Paulo had a brain tumor.

She told CBS that after the audience, Pope Francis greeted her personally and told her he would pray for her son:

“He took my hand and said, ‘For you, the impossible doesn’t exist.’

Three weeks after that meeting, the doctors told Elsa that Paolo no longer has any signs of cancer and that his condition has improved. She stated that, in her view, Pope Francis performed a miracle for which she would like to be grateful.

The Vatican has not commented on the case.