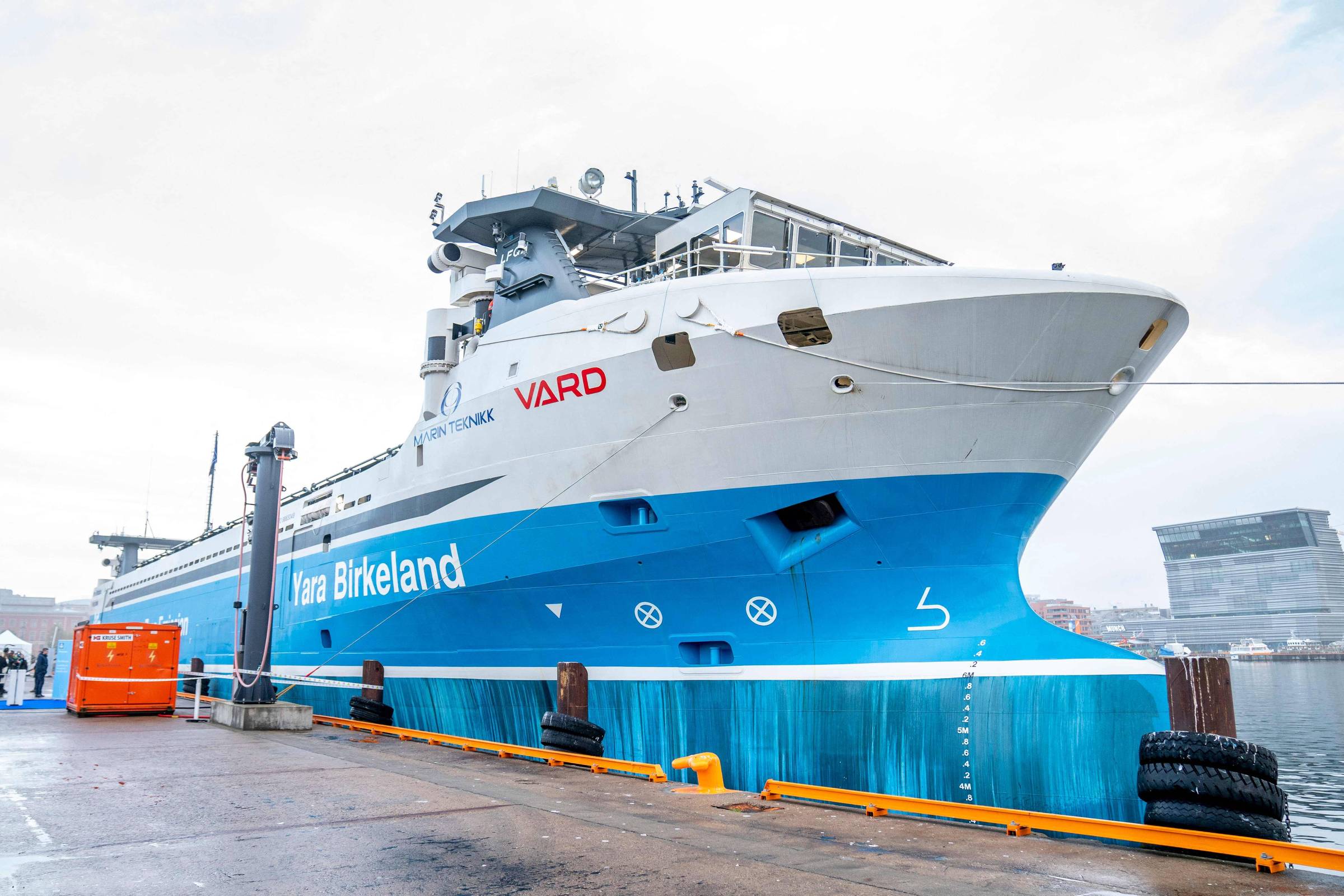 Norway presented to the press, this Friday (19), the first 100% electric and autonomous cargo ship in the world, which represents an important technological progress, but a small ecological contribution to a sector that seeks to reduce its environmental impact.

The “Yara Birkeland” will take care of the sea transport of up to 120 containers of fertilizer from a factory in the city of Porsgrunn to the port of Brevik, about ten kilometers away. As a result, around 40 thousand truck trips will be avoided annually for the same purpose.

“Certainly, there have been difficulties, setbacks, so it is even more gratifying to be here today and see that we have made it,” Yara director general Sveint Tore Holsether told AFP.

Many months behind schedule, the “Yara Birkeland”, which is 80 meters long and 3,200 tonnes in dead weight, will now start a series of tests over the next two years, which will help it to function autonomously, with fewer and fewer crew members. .

The bridge is expected to disappear within “three, four or five years,” Holsether detailed. Thus, it is expected that the ship will be able to cover its daily path of 7.5 nautical miles, by its own means, only with the help of sensors.

“Many of the incidents that occur on ships are caused by human error, fatigue, for example,” explained project leader Jostein Braaten. “Autonomous operations can guarantee a safe trip,” he added.

Despite the short course distance, the obstacles are not few: the freighter will have to navigate a narrow fjord, pass under two bridges, deal with the influence of currents and share the space with other vessels of various sizes, including kayaks, before docking at one of Norway’s most saturated ports.

In the coming months, the team will dedicate itself to “learning” the vessel, so that it can start to navigate autonomously.

“First of all, we have to detect that something exists, understand that it’s a kayak, and then determine what to do,” Braaten commented.

Aboard the “Yara Birkeland”, the traditional engine room has been replaced by eight compartments filled with batteries that give the boat a capacity of 6.8 MWh. “It’s the equivalent of a hundred [carros] Teslas,” said Braaten.

The maritime sector is responsible for almost 3% of total greenhouse gas emissions related to human actions and intends to reduce them by 40% by 2030, and by 50% by 2050.

According to the latest data available from the International Maritime Organization (IMO), the sector’s emissions rose from 962 million tons of gases in 2012 to more than 1 billion tons in 2018.

The “Yara Birkeland” will save 678 tonnes of CO2 per year, a negligible amount for combating climate change. Furthermore, experts believe that this type of transport cannot be generalized.

Thus, electricity as a source of energy can only be applied to some types of vessel, such as “ferries, as they have short and stable journeys” or, “eventually, for cabotage and river transport, but it is poorly adapted to long crossings oceanic,” said Camille Egloff, maritime transport specialist for the Boston Consulting Group.

“The vessels will not only need autonomy to cover great distances, but the port terminals will also be equipped with adapted charging stations. Therefore, there is a challenge that is not only technological, but also of charging infrastructures that require coordination of many parts,” he pointed out.

Currently, dozens of electric ferries travel the fjords of Norway, a country that, despite being a large producer of hydrocarbons, is a leader in the electric transport sector.