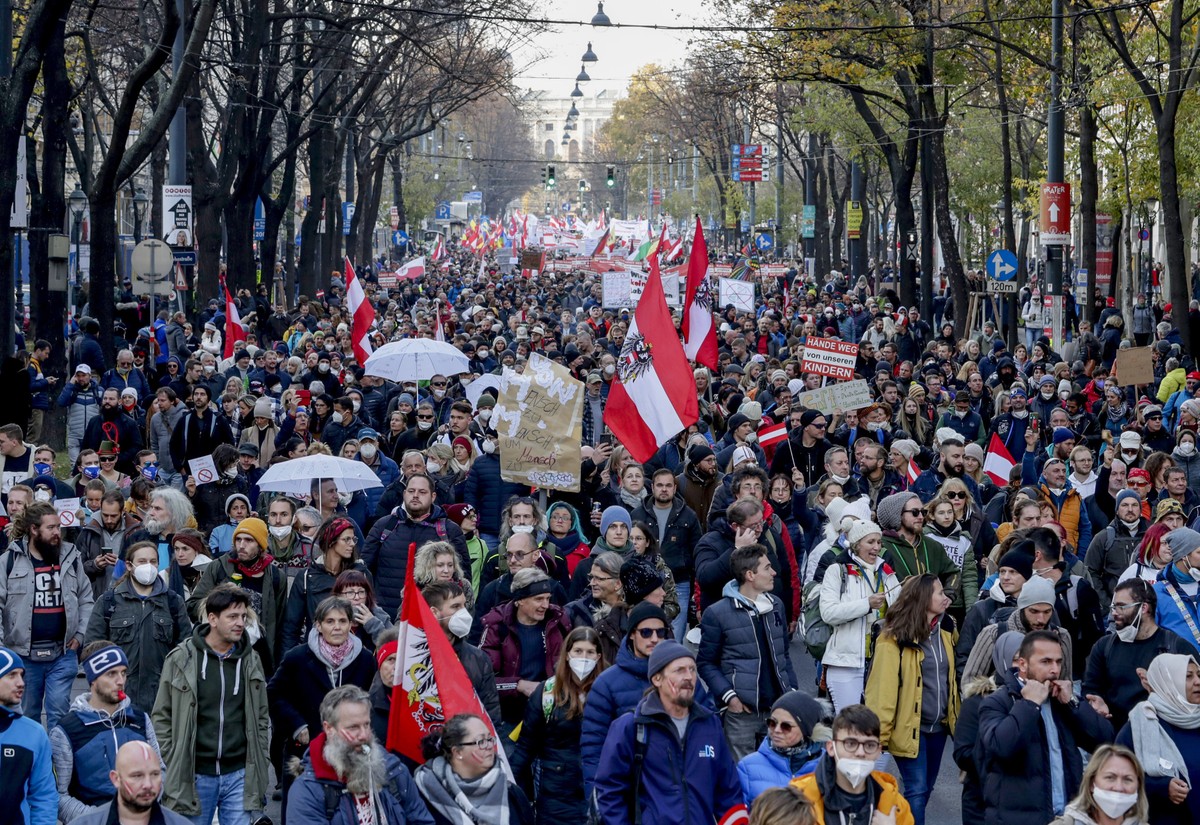 Thousands of protesters gathered in Vienna this Saturday (20) to protest against the new national lockdown announced by the government to contain the advance of Covid-19.

Many protesters carried posters with slogans such as “no vaccination”, “enough is enough” or “down with the fascist dictatorship”. The far-right opposition Freedom Party is among those who called the protest and pledged to fight the new restrictions.

Austria became the first country on the European continent to reinstate national confinement. The measure runs from next Monday (22) and takes place days after the Austrian government imposed a confinement to the unvaccinated.

Austria’s Chancellor Alexander Schallenberg said the new lockdown would last at least 10 days and that there would be a legal requirement from February 1, 2022 for people to get vaccinated. He admitted that he is asking “a lot” of vaccinated people because “many people don’t show solidarity”.

Austria has one of the lowest vaccination rates in Western Europe. Approximately 66% of the population is fully vaccinated.

Many Austrians are skeptical of the vaccine, a view encouraged by the far-right Freedom Party, the third-largest in the local parliament. The group’s leader, Herbert Kickl, did not attend the demonstration as he became infected with Covid-19, according to Reuters.

A strong police contingent was mobilized to accompany the protest. Police officers used loudspeakers to tell protesters that masks were needed, but most did not, according to the Associated Press.

The crowd, gathered in the center of the Austrian capital near the seat of government, waved banners denouncing “the corona dictatorship” or even saying “no to the division of society”, referring to the unvaccinated who, for a week, have only been able to leave home to buy food, go to the doctor or the pharmacy, informs the RFI.

By mid-afternoon (local time), the crowd had gathered about 35,000 people, according to police, and marched along Vienna’s inner ring road before heading back to Hofburg.

Protests in other countries and increasing cases in Europe

Many other European countries are imposing restrictions as cases increase on the continent. And protests have also taken place in other countries. The day before, dozens of people were arrested and seven were injured in Rotterdam, Netherlands, during an act against the partial confinement implemented by the government.