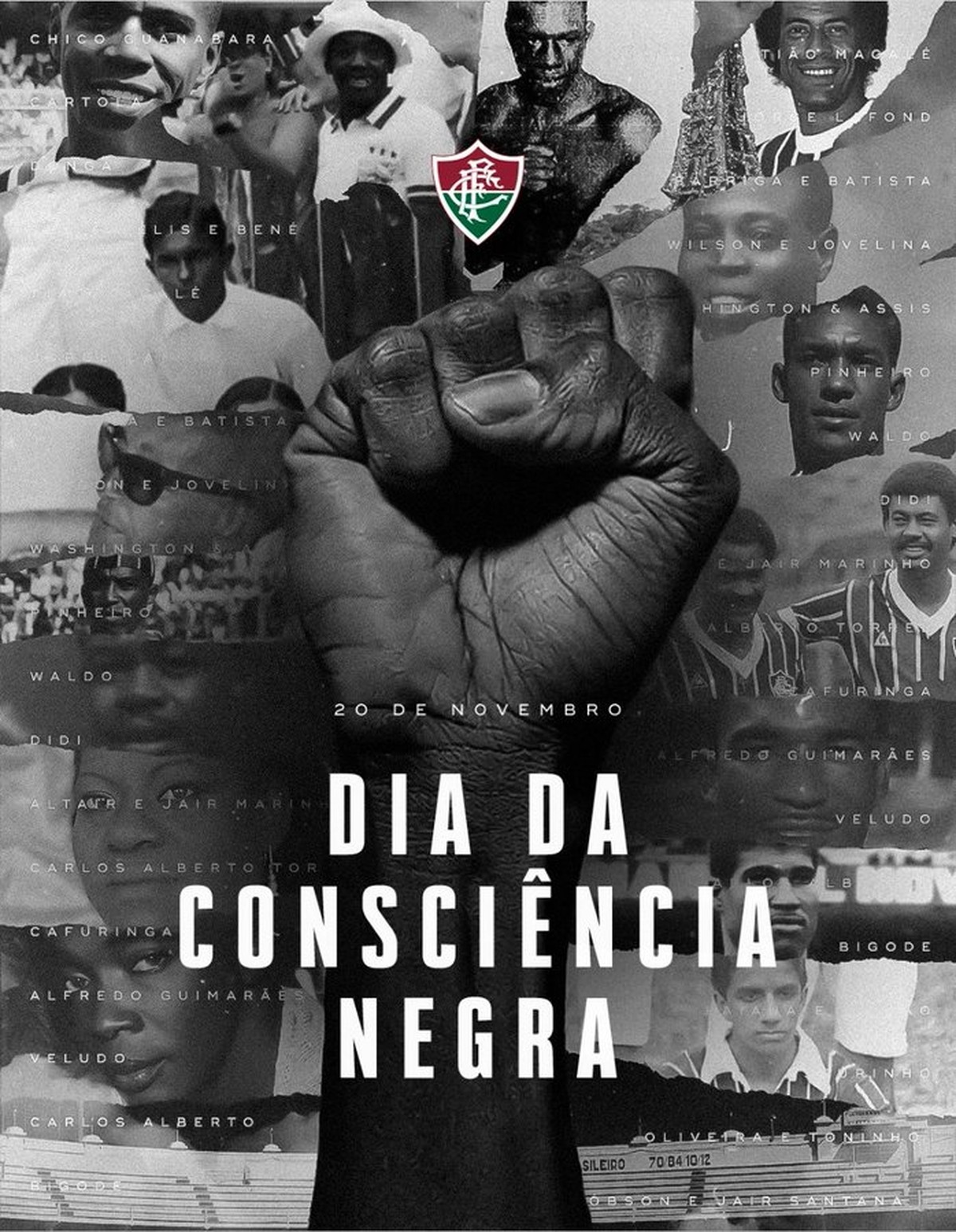 This Saturday, November 20th, Black Consciousness Day, the Fluminense released a program aimed at combating racism. Among the club’s main actions are a web series, which will last for a year, and tributes in the uniform in the game this Sunday against América-MG, at 17:00 (GMT), at Maracanã, for the 34th round of the Brazilian Championship.

Produced by FluTV, the series is based on the story of Chico Guanabara, a black capoeirista considered the first fan in the history of Fluminense and, according to the club, of Brazilian football. At the beginning of the 20th century, when football was a sport frequented by the elite of Rio de Janeiro, he built his “mode of cheering” by screaming at the top of his lungs during the 90 minutes.

Divided into 12 monthly chapters, always released on the 20th of each month until October 2022, the series will navigate through themes and characters in which the stories mix with Fluminense’s and will discuss structural racism and its implications, in addition to villainization of the club in the context of “racial democracy”, such as the fame of powdered rice. The first episode airs at 8pm on FluTV. Members will have first-hand access to the exclusive content tab at nense.com.br.

All 23 players listed for the match against America-MG will wear shirts with the names of black personalities from the club’s history who have died. After the match, all pieces will be auctioned on the platform “Play for a Cause“, and the amount raised will be destined to the entities “Nóiz Projeto Social” and “Eduardo Cardoso Boxing School – Team Cachorrão”. The auction will open at 2:00 pm this Saturday and runs until the last day of the month. The minimum bid is R. $700.

Robson and Jair Santana: Robson marked the history of Fluminense from 1950 to 1959, acting as a left-winger and carrying the three colors in 282 games. Jair Santana represented the Tricolor from 1952 to 1960 as a midfielder in 332 matches. Both were members of the world champion squad, at the Copa Rio in 1952.

Oliveira and Toninho: Both acted as full-backs, on the right, taking turns in the position. Oliveira is part of the list of 20 players who defended the tricolor most times. Toninho, despite less time at the club, also participated in important titles and achievements.

Dark: With about 500 games with the tricolor shirt, Benedito Custódio, known as Escurinho, is among the players who played the most for Fluminense. He scored more than 100 goals between the 1950s and 1960s.

Fidelis and Bené: Fidélis André Terra was known for being the owner of the traditional bar located at the club’s headquarters, in Laranjeiras. Over 50 years old, the bar is located in front of the social entrance. Benedito da Silva, also known as Bené, dedicated his life to Fluminense, where he worked as a coach for the volleyball teams and discovered talents such as Bernardinho, Fernandão and Badalhoca.

Peitão and Baiana: Peitão, an illustrious fan and boxing champion, had free access on training days and games, however, he didn’t like to stay put. The marine circulated throughout the area, encouraging the athletes with greater freedom. In 1927, he assumed the leadership of the tricolor crowd with his remarkable cry “É Flu”. Maria Cecília, known as Baiana, was an assiduous fan, present in every game. He sang, suffered and celebrated the team’s results. A street vendor in Largo da Carioca, she was present on the day of the demolition of part of the stands at Estádio de Laranjeiras, bursting into tears.

Belly and Baptist: Belly was an illustrious fan. In victory or defeat, he drank, becoming known for his traditional binge drinking to celebrate or drown his sorrows. Batista, a Navy sergeant and partner in the stands of Arnaldo Guinle, Afonso de Castro and Coelho Netto, had free access to the club’s premises on training days and games. Passionate about the club, he never failed to show his smile when referring to Fluminense.

Donga: Ernesto Joaquim Maria dos Santos, known as Donga, used to frequent samba and candomblé circles in the terreiros, cantadeiras, party girls and Mãe-de-santo. From there, samba as we know it was born. Donga was a Fluminense fan, as well as several other big names in samba.

Jorge Lafond: Jorge Lafond was an illustrious tricolor fan. Actor, his main character was “Vera Verão”. Besides, he was a comedian and dancer.

Jovelina and Wilson Moreira: Jovelina Pérola Negra was a Brazilian singer and songwriter. He sang samba in his strong, husky voice, with a popular tone and slamming force. Jovelina was born in Botafogo and supported Fluminense. Wilson Moreira was a samba dancer and composer of great hits recorded by Zeca Pagodinho as “Quintal do Céu”.

Tião Macalé: Tião Macalé, from Trapalhões, known as “Disgusting, tchan!”, was a Fluminense fan and a regular fan of the stadiums. I even got sick in Tricolor matches.

Topper: Founder of the Mangueira samba school, Cartola was a training spectator at the time of the three-time champions from Rio de Janeiro in 1919. At the age of eight, he moved to the neighborhood of Laranjeiras, very close to Fluminense, where he lived with his family and became tricolor, having Marcos Carneiro de Mendonça as a great idol.

Chico Guanabara: With the first games of Fluminense also appeared the first fan, a man who screamed at the top of his lungs for 90 minutes, encouraging the team. Chico Guanabara, respected capoeirista, lived in Retiro da Guanabara, now Álvaro Chaves, in the back of the Tricolor field.

Shirts by Didi and the duo Washington and Assis in honor of Black Consciousness Day — Photo: Divulgação / Fluminense

Washington and Assisi: “Casal 20” arrived at Fluminense in 1983, after their success at Athletico-PR. As protagonists, they conquered the tri-championship of Rio de Janeiro, between 1983 and 1985, in addition to the 1984 Brazilian Championship.

Waldo: When Waldo established himself in the first team, he never stopped scoring goals and became the greatest scorer in the club’s history, a brand that belongs to him to this day. His sale to Valencia, Spain, left a gap that took years to fill.

Didi: One of the greatest players of all time. His performance on the field earned him the name “Mr. Football”. Conductor of the 1958 and 1962 world champions Brazilian teams, scorer of the first goal in the history of Maracanã and inventor of the “Folha Seca”, Didi stood out as one of the highlights of the 1952 World Cup conquest (Copa Rio). of the Tricolor Machine, in 1975.

Altair and Jair Marinho: Nicknamed Fiapo, Altair was an exemplary full-back, fourth player with more performances for Flu. He was in the two-time world champions team in 1962, along with Jair Marinho, his great partner on and off the field. After ending his playing career, Altair worked for many years in Laranjeiras as a coach, or part of the coaching staff.

Mustache: Wearing the Flu shirt, against Peñarol, for the 1952 World Cup (Copa Rio), Bigode put in his pocket the man who had made Maracanã cry. And Flu won 3-0. Mustache returned to wearing “his” tricolor shirt until the end of his career, with which he asked in his lifetime to be buried.

Pine: Pinheiro dedicated most of his professional life to Fluminense. He debuted at just 17 years old and quickly became one of the foundations of the team. He was the second player who most defended the Flu in all history. After hanging up his boots, he became the club’s coach and dedicated himself to revealing talents. When he died, he had the just honor of being the first veiled professional player in the club’s Salão Nobre.

Carlos Alberto Torres: Raised in the base divisions of Laranjeiras, it is considered by many to be one of the greatest right-backs of all time. He succeeded Jair Marinho and was one of the standouts of the 1964 Rio de Janeiro title. In 1976, when many thought he was finished for football, he returned and was champion, with the same brilliance as in other times. In 1984, already out of the four lines, he helped the club to sign the Paraguayan Romerito, with whom he had played at Cosmos, and as coach led the team to another title in Rio.

Cafuringa: His career at the club began in the late 1960s. As a right winger, Cafuringa was a four-time Rio champion wearing the tricolor shirt. He was known for his speed and skill when passing his opponents. He was very dear to the fans.

Carlos Alberto: In 1914, Carlos Alberto debuted at Fluminense. In a game against America, his former team, references to the use of “rice powder” started. Since then, the tricolor fans have given new meaning to the screams, which came from the rival fans as an attempt at offense. The rice powder, then, became a great symbol of the parties in the stands.

Alfredo Guimarães: In 1910, Alfredo Guimarães began his career at Fluminense acting as a midfielder, being the first black athlete in the club’s history. Alfredo was present in the rout where Tricolor won 4-1 against Rio Cricket, by Campeonato Carioca.

Velvet: Starting his young career, Veludo defended the Tricolor from 1949 to 1956, where he served as goalkeeper and took turns with Castilho. Caetano da Silva also made history in Brazilian football in the 1950s, when he went to the 1954 World Cup, as a substitute for Castilho, both Fluminense goalkeepers.