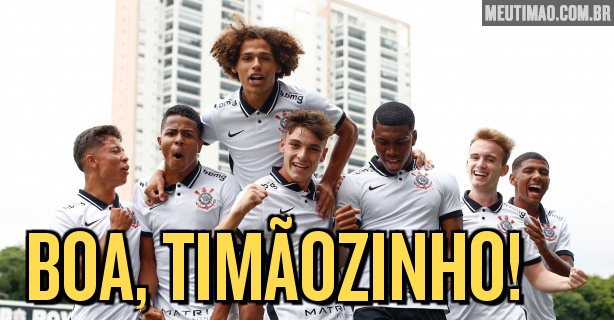 Corinthians hosted Desportivo Brasil at Fazendinha and won 2-1 this Saturday. The match valid for group 11 of the São Paulo Under-17 Championship had goals from Felipe and Pedrinho. The rival’s goal was from Victor.

With the result, Timão reached six points and, now, shares the leadership of its bracket with Desportivo Brasil. Before that, the team had tied the first three matches of the second phase. In the end, the two best placed advance to the quarterfinals. Earlier, the U-15 also had a commitment and drew 3-3 with SKA Brasil.

Those chosen by Ramon Lima for the U-15 were Vasconcelos; Pellegrin, William, Yago and Kaio; Caraguá, Beto and Bahia; Juninho, Guilherme and Pedro.

Gustavo Almeida decided to send the U-17 to the field with Felipe Longo; Leo Agostinho, Renato, Thomas Argentino and Vitor Meer; Caio, Breno Bidon and Pedrinho; Felipe, Biro and Wesley.

On the other side, the squad that faced the biggest had Miguel; Guilherme, Eduardo, Rayan and Igor; Fabinho, Caique, João Queiroz and Victor; Felipe Cavalcante and Matheus.

Before the ball rolled, the teams respected a minute of silence. During this time, Timãozinho made an anti-racist gesture in honor of Black Awareness Day. With the opening whistle, Desportivo Brasil left. After just four minutes, Guilherme failed and Wesley crossed to the goal. The goalkeeper managed to defend and conceded a corner. Biro launched in the area and Thomas went after Wesley. The ball, however, did not arrive.

The first goal came after seven minutes. Wesley had Biro and Felipe in the area as options. He chose shirt 9 and sent a gift to his partner. Felipe dominated, turned and opened the score for Corinthians. Then Leo tried to zoom in and their crossing stopped in Miguel’s hands. In the sequence, Biro found Wesley, who took a risk in the defense.

Caique went in search of a tie and Breno Bidon appeared to stop it. Then, Wesley made a cross looking for Felipe, but it was too close and the goalkeeper caught. Breno risked a long individual play and the ball went over the crossbar. Felipe even made a throw to Caio and the ball hit the defenders.

Wesley also tried to play alone and went to the bottom line. However, Eduardo made the cut to corner. In Breno’s hit, the ball stayed with Biro, who sent it to Caio. He made the survey for Felipe, but the judge was already marking an irregular condition. Bidon passed to Pedrinho, who sought Biro, but the ball was too strong.

Soon after, Felipe Longo was required for a defense. Later on, Timão returned to attack and Pedrinho crossed for Biro, who submitted on goal. At 32 minutes came the second goal. Wesley sent it to Felipe, who found Pedrinho free in the area. The shirt 8 hit crossed and didn’t give the opposing archer a chance to defend. In a free kick, Felipe made a good defense with a slap and guaranteed a partial victory in the first half by 2-0.

On his way back from halftime, Caio had to cut a cross and he did it. Then Samuel made a throw and Felipe Longo got out of goal. The goalkeeper couldn’t keep the ball and Victor hit between the crossbar and Meer, discounting the difference for Desportivo Brasil. As a result, Meer was fouled and João Queiroz was punished with a yellow card.

Then it was Igor who was missed. As a result of the charge, Corinthians got the goal kick. In another set-piece, Victor made the throw, which ended in touch. The same player had another chance by hitting cross, but the attempt was left with the defense. Biro made a toss for Felipe and the referee called offside.

Leo Agostinho suffered a hard entry and had to stay on the ground for a few minutes. In response, Victor received a yellow card. Gustavo Almeida’s assistant, Caco Espinoza, was also yellowed due to a complaint. To complete, Pedrinho was warned of the same in another bid. Victor crossed to Samuel and Felipe Longo grabbed him.

Felipe had a good chance when he dribbled the defenders in the area. He hit into the goal, but Miguel held back. On the other hand, Felipe Longo also had to defend a deflected submission. After a throw started on the side, Caique took the risk from a distance. However, it went over the goal. Felipe tried to take advantage of Miguel’s exit, but his attempt was pointless. Lucas grabbed a leftover launch that was for Victor and hit the net.

The referee gave six minutes of stoppage time. In this time, Kayke suffered a dangerous foul and Leo charged straight into goal. The ball went over the top and no more danger shots happened afterwards. Thus, the final result was 2-1. With the end, Felipe do Desportivo Brasil filed a complaint with the judge and ended up getting a yellow card.

Check out the upcoming Corinthians U-17 games