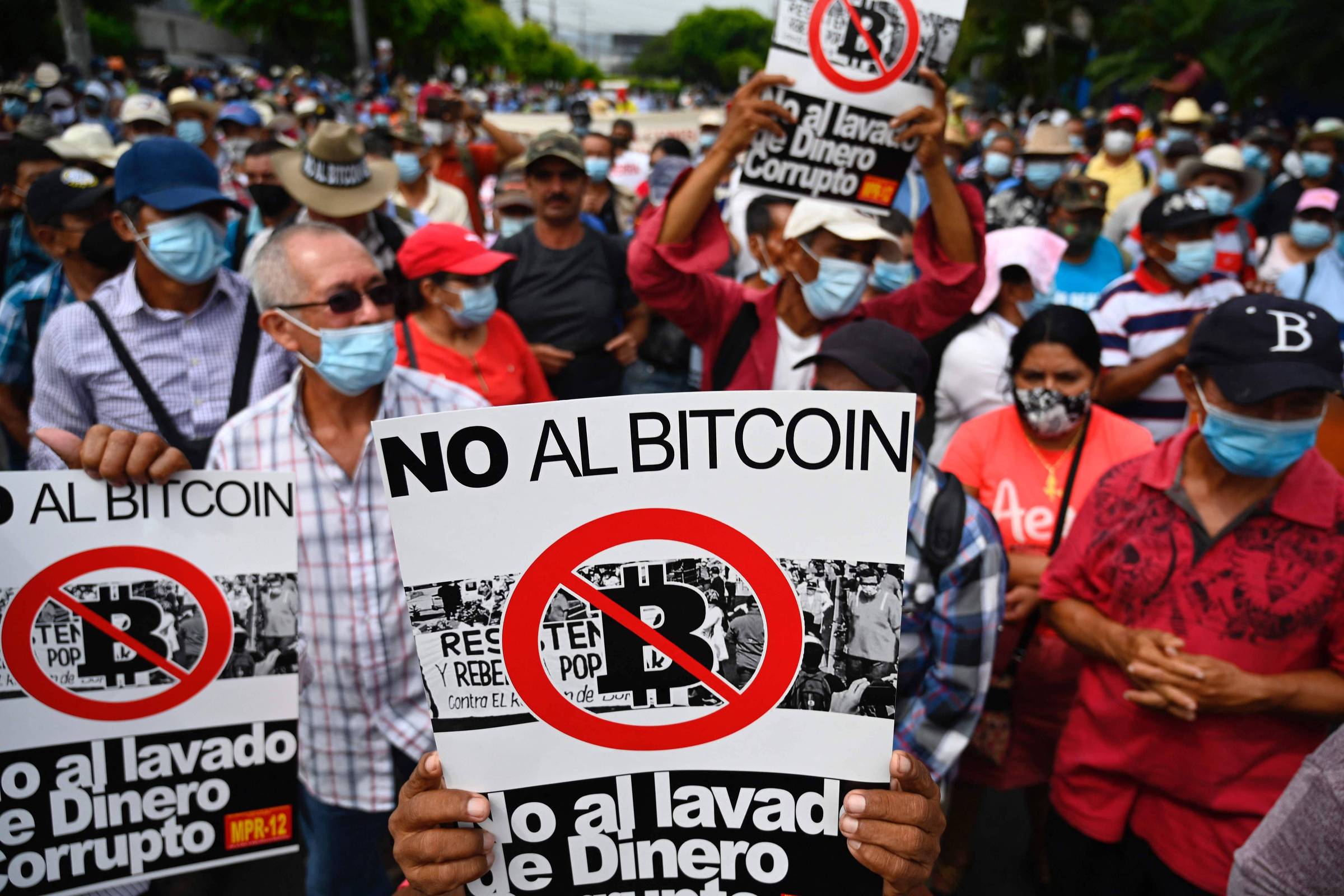 Curiosity sparked Javier Cortez one Friday afternoon while working in downtown San Salvador. He was selling cell phone covers in his tent in the capital of El Salvador when he decided to download Chivo, the country’s electronic wallet for bitcoins.

“I don’t know how this coin is formed, who distributes it, or anything like that,” says Cortez, who is a member of the country’s National Coordination of Sellers.

Still, he –as other Salvadorans have been doing for two months– has been trying to adapt to the monetary innovation since the small and violent Central American nation of 6.5 million inhabitants regulated bitcoin as the official currency alongside the dollar, adopted in 2001 .

On September 7, El Salvador became the first country in the world to officially adopt the cryptocurrency. The idea publicly appeared on June 5, when the country’s president, Nayib Bukele, announced the intention in a video sent to the Bitcoin 2021 conference, held in Florida, USA.

Just four days later, the project was approved by the Legislative Assembly, and within three months it became part of the population’s daily lives.

Even with Bukele’s popularity — local polls from early September indicated he had an approval rating of nearly 85%, making him the highest-rated president in Latin America — the transition to digital currency has not been a smooth one. On the eve of entering into force, a survey by the Central American University indicated that 65.2% of the population did not agree with the idea of ​​the government directing resources to implement the novelty.

The past few weeks have seen protests across the country, the biggest since the president came to power in 2019. “Bitcoin is against the poor,” said protesters who took to the streets on Sept. 30. About half of the country’s population lives below the poverty line. On October 17, with posters bearing the phrases “Bitcoin, the fraud” and “No to the dictatorship”, Salvadorans took to the streets again.

Three days after implementing the currency, Bukele announced that Chivo — which in Spanish means goat but is also local slang for something beautiful — already had 3 million users. Nearly half of Salvadorans have already adopted the e-wallet, according to the government.

“Bukele has made an effort to be the coolest president in Latin America,” says public relations officer Rafael Moreira, using slang that the president himself used in a Twitter post in June 2019.

It was also on the social network, where he introduces himself as the “Emperor of El Salvador”, an irony with his opponents, that Bukele launched a series of tweets in which he ordered his ministers to fire employees of the previous administration, in one of his first actions as president .

There he interacts with his 3 million followers and has already given orders to his team based on user complaints.

In August, Moreira, who also provides technical support to the CNTS (National Confederation of Salvadoran Workers), had been organizing demonstrations against the measure every Sunday in Civica Square, in the center of the capital, San Salvador.

“All the systems have been changing, and bitcoin is just another one. So far so good, because that’s how the economy is boosted. But we consider the point of view of the common Salvadoran, of the small trader,” says Moreira.

Especially for this type of professional, the measure can be bad, he defends. The law determines that every economic agent must accept bitcoin as a form of payment.

Despite the fact that the law also excludes from the obligation those who “due to a notorious and evident fact” do not have access to technology for transactions, the matter remains cloudy for Salvadorans. There are no regulated sanctions for those who do not accept the cryptocurrency.

Many, like Cortez and his friends, had difficulty dealing with the app and currency fluctuations. The Bukele government gave US$ 30 (R$ 155.10, at the price at the time) to anyone who downloaded Chivo. But the next day, the app indicated $26.71 in the cryptocurrency wallet of the user who hadn’t moved a penny.

On September 7th, bitcoin had devalued by almost 11%. A day later, it increased 1.13%, and the following days were of ups and downs. On September 16, it was 7.6 percent lower than the day before the bitcoin law went into effect in El Salvador. The last few weeks have been one of growth.

Currency instability is one of the biggest fears of Salvadorans interviewed for the report. Since January 2020, the asset has appreciated by almost 700%. But there were drops and sudden highs along the way.

Part of the cryptoactive community, however, welcomed the measure. Among the benefits cited would be the investment of currency enthusiasts in the country and the facility to make international remittances. More than 3 million Salvadorans live abroad, mainly in the United States, and the money they send to family members is an important source of resources for the local economy.

Economist Cesar Villalona, ​​head of the association Professionals for Transformation in El Salvador (Proes), fears that the new currency will paralyze the country’s economic activity by reducing the capacity to import capital goods, for example.

“A Salvadoran businessman who wants to bring a vehicle from Japan won’t pay in bitcoin, because the Japanese don’t have to accept the currency,” he says. “We are not a machine producing country.”

Falling production and company profits, he says, could lead to unemployment and higher defaults. “And, if the economy contracts, tax revenue drops”, he completes.

He recalls that El Salvador’s central bank has lost the ability to issue currency since the economy’s dollarization. “The entity maintained two functions: keeping economic statistics and managing a liquidity reserve.”

One of the reasons mentioned by Villalona for adopting cryptocurrency is the desire to please the wealthiest sectors of the country. “For rich people it might not be a problem because they are playing in a casino. One wins and one loses, that’s what bitcoin is for today. For speculation.”

Ricardo Castaneda, an economist at Icefi (Central American Institute for Fiscal Studies), says he fears for public accounts. He recalls that the new law determines that “all tax contributions can be paid in bitcoin”.

“If the government decides not to convert them immediately into dollars, the collection may increase, but it may decrease,” says Castaneda, referring to the currency’s volatile characteristic. “In the context of El Salvador, which has low revenue, it’s a very high risk.”

Many reasons could be behind this decision, he says. One of them is the relationship with the United States, which at the time the law was passed was shaken by the dismissal of five Supreme Court justices by the country’s Legislative Assembly, a majority government party. The magistrates had taken measures against the president. At the time, the attorney general was also removed from office.

“There were those who thought that there could be some kind of sanction to the Salvadoran government that would include the issue of remittances. So it may have been an option to prevent the effects of the sanction, since now there is another mechanism by which to send them”, says Castaneda.

“For me, implementing bitcoin is like jumping out of a plane without a parachute and without an expert. You might fall on your feet and everyone applauds you for the feat, but it’s likely to be very costly,” he says.

The IMF (International Monetary Fund) did not welcome the measure either. In June, agency spokesman Gerry Rice said “the adoption of bitcoin as the official currency raises a number of macroeconomic, financial and legal problems that require very careful consideration.”

Lawyer Julio Cesar Navas, adviser to the Salvadoran Society of Merchants and Industrialists, says that the rise in the currency encouraged his friends to download their digital wallet. “They saw that it is a market that has its advantages,” he says. He defined the tool as “another possibility that people have to acquire goods and services, in addition to accessing international markets”.

“In the beginning there is fear and also ideological barriers,” says Navas. “A month later, the dollar has not disappeared from El Salvador, wages are not being paid in bitcoins, commerce continues to accept dollars and bitcoins.”

The currency appreciation made the US$ 30 of trader Javier Cortez, at the beginning of the text, reach US$ 37.78 this Friday. “The country is in chaos, convulsed,” he said in mid-October, when the country was experiencing protests. He says he is not participating in the demonstrations due to the authoritarian climate in the nation.

Most of their colleagues just took their money out of their digital wallet and don’t use it anymore. During sales, no one asks to pay in bitcoins, he counts. In other words, “hasn’t changed anything” in his words.

This doesn’t make you neutral about the measure. “I’m against it from the point of view of the investment the government made to implement it”, he says. On September 6, the day before bitcoin became a currency in the country, Bukele announced the purchase of 200 bitcoins (about R$54.460 million, at the price at the time).

“People are confused. They should have educated the population to use bitcoin, but they imposed this law overnight,” says Cortez.