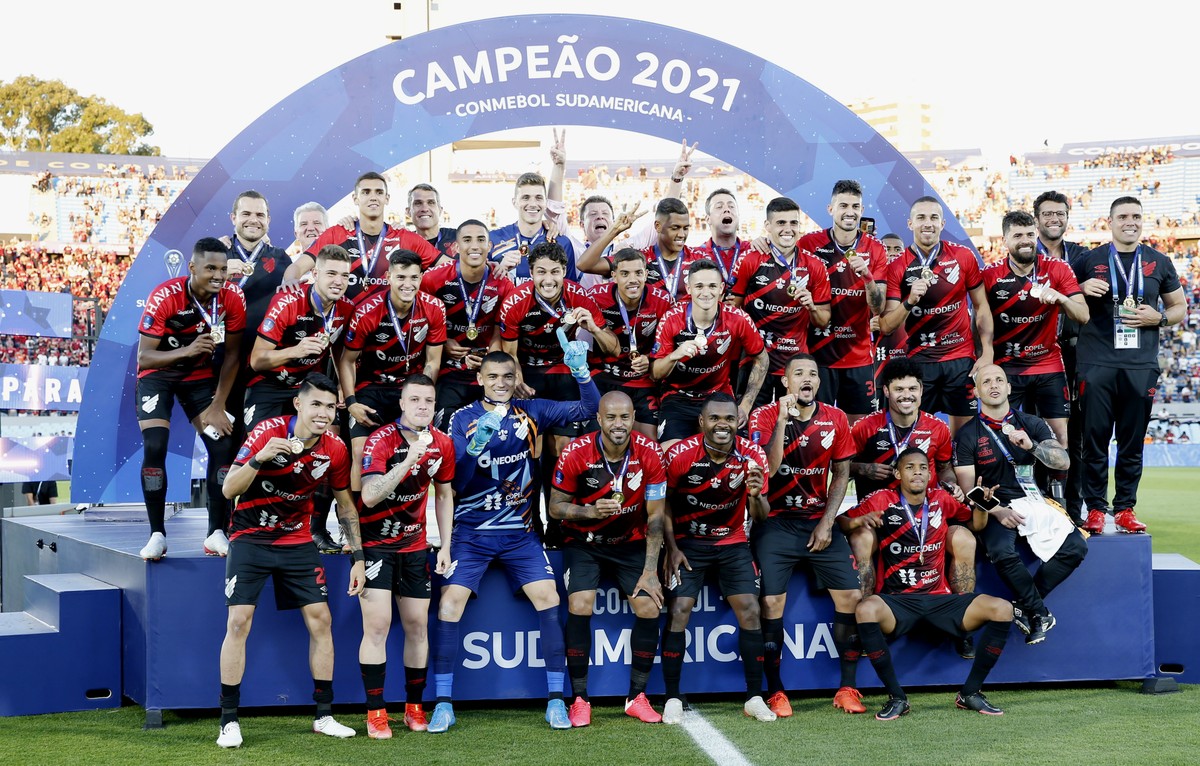 Athletico’s path to the second title of the Copa Sudamericana passed through five countries and seven opponents until the conquest of the desired cup. A campaign that began in Ecuador, beating Aucas, and ended in Uruguay, at the Estadio Centenário, with the victory over Bragantino.

Athletico had 11 wins and two losses in the entire campaign – 84.6%. There were 21 goals scored and only six goals conceded in 13 matches.

Scorer of the title goal, Nikão was one of Hurricane’s top scorers in the competition, with four goals, alongside Vitinho, who was traded with Dynamo Kiev after the quarter-finals. Christian scored three goals, Renato Kayzer, Bissoli and Pedro Rocha each scored two, and Abner, Canesin, Carlos Eduardo and David Terans each scored one goal.

Hurricane passed through Aucas, Metropolitanos and Melgar in the group stage – only the leader qualified. Afterwards, he eliminated América de Cali, LDU and Peñarol, until reaching the final with Bragantino.

It is worth noting that Athletico had 100% success at home, even without the presence of the public in the six matches played at Arena da Baixada along the Sudamericana. The fan could be present in the semifinals return game, against Peñarol, when the return of the public to the stadiums was released in Curitiba. But the Hurricane vetoed the presence of the public in the Baixada. The fans, at the time, had to make the party outside the stadium, when the team arrived.

Reminisce about each game in the campaign:

It was only Athletico’s fourth game of the season, the first with the senior team. Hurricane went to Quito, Ecuador, it wasn’t brilliant, but it managed a goal after a corner kick by Nikão and an attempt by Erick – the refereeing scored an own goal for Fydriszewski. The goal was just a small break from Athletico’s slow pace throughout the match. The team struggled in its first game of the year and around Quito.

Athletico’s debut was with victory over Aucas — Photo: José Tramontin/Athletico

In the second round of the group stage, Athletico dominated and beat Metropolitanos 1-0, at Arena da Baixada. The thin score, with a goal by Renato Kayzer in the second half, summed up a game that Hurricane had control, but little ability to finish. In the second, after a scare by the Venezuelan team, the forward shook the net. Rubro_Negro still got one more after the expulsion of Mancín (who attacked Kayzer).

Closing the first round of the bracket, Athletico lost to Melgar in Lima, Peru. Hurricane had a lot of trouble to finish. Hurricane conceded the goal in the fourth minute, scored by Bordacahar, and remained sleepy on the field, with many mistakes. Result that turned on the alert in the fight for the leadership and, consequently, for the vacancy in the next phase.

In a tight and nervous game, Athletico beat Metropolitanos in Caracas, Venezuela, with a goal scored by Vitinho, 15 minutes into the second half. Before, Hurricane had accumulated lost chances with Kayzer. With the advantage on the scoreboard, Rubro-Negro was little dangerous, as well as Metropolitanos, who forgot to shoot on goal. The result was very important, as a stumbling block could distance the team from Melgar, then leader of the bracket (which ended up losing two days later to Aucas).

It was a direct confrontation for the leadership, and the homework was successfully completed. Once again with a meager but important victory, Athletico beat Melgar by 1-0, at Arena da Baixada, with a goal by Renato Kayzer. The result left Hurricane in the lead of group D, opening three points for the Peruvians and missing a round. The game did not take off for Hurricane, which dragged on until the end of the match, but Kayzer’s goal in the first half guaranteed the important three points.

After several meager victories, a rout to seal the leadership and classification to the round of 16. The game was a celebration and tribute to Lucho González, who said goodbye to the fields at the age of 40 and saw his teammates dominate the match. Hurricane opened the scoring with Christian and then Abner expanded in the first half. Even without so much control, the second half was also easy for Hurricane, who scored the third with Vitinho and, later, Carlos Eduardo completed the rout.

In the first leg of the round of 16, Hurricane opened an advantage away from home, at Estádio Hernán Ramírez Villegas, in Pereira, Colombia. Nikão scored the winning goal, with a penalty, in the 27th minute of the second half. On the field, Hurricane played with three defenders and no center forward, with Terans more advanced. Rubro-Negro had difficulties in the first stage, improved after the break and managed to secure the score and the advantage for the return game.

With great performance, Athletico thrashed América de Cali-COL by 4-1, at Arena da Baixada, and advanced to the quarterfinals. Vitinho scored twice, Nikão and Canesin also scored, while Adrián Ramos scored for the Colombians. Highlight for the goal that opened the scoring, in the first half: Pedro Henrique headed the ball in the middle and stopped on Nikão. He tabled with Christian, then with Terans, entered the area and crossed to Vitinho, who just rolled into the net. Great goal!

Athletico held a goalless draw in Quito, but a fatal flaw in the end cost them their loss in the quarter-finals leg. Reasco scored the only goal of the night in the 41st minute of the second half at the Estádio Casa Blanca. Hurricane used a 5-4-1, held up LDU pressure for most of the game and produced rare opportunities in attack. In the end, the defense faltered, Kaprof fired, and Reasco scored.

Turning around and with unlikely heroes, Athletico passed through LDU in Baixada and advanced to the semifinals. Amarilla opened the scoring for the Ecuadorians in the first half and increased LDU’s advantage with the victory of the first leg. But Richard did two and turned, while Julio left everything the same in the first half. In the second stage, Bissoli scored two goals, one of them with a penalty, and guaranteed the victory of Rubro-Negro and a spot to take on Peñarol.

With great goals, Athletico opened up the advantage in their search for a place in the final. Terans opened the scoring after just two minutes on his bike, top scorer Álvaro Martínez equalized for Peñarol, but Pedro Rocha secured the victory in the 29th of the second half with a bomb from outside the area. A game that Hurricane knew how to take advantage of the chances and also hold the pressure made by the Uruguayan team. Santos, Thiago Heleno and company closed the spaces and ensured victory.

Athletico took advantage of the first leg, underwent surgery and guaranteed a place in the final. Peñarol pressed, and Hurricane bet on the counterattack and scored a goal like that. Terans took off from the defense field, entered the area and played for Nikão, who fixed it and kicked low to open the scoring, in the first half. The Uruguayan team also had a penalty, but Santos was stopped in the middle of the goal and defended the charge by Ceppellini. In the second half, Pedro Rocha decreed victory.

The title came at the Centenário stadium, in Montevideo. Unique, nervous game. But Athletico has Nikão, and he’s the guy in the decisions. Idol of the Hurricane, he took advantage of the rebound by goalkeeper Cleiton, after a shot from Terans, and jumped to give a volley and send him in the corner, in the 28th minute of the first half. In the second stage, Bragantino pressured, scared until the end, but the victory went to Hurricane, champion of the Copa Sudamericana for the second time.

Athletico returns to the field against São Paulo on Wednesday, at 9:30 pm, at Morumbi, for the 34th round of the Brasileirão. The red-black team has 41 points and occupies the 13th position.