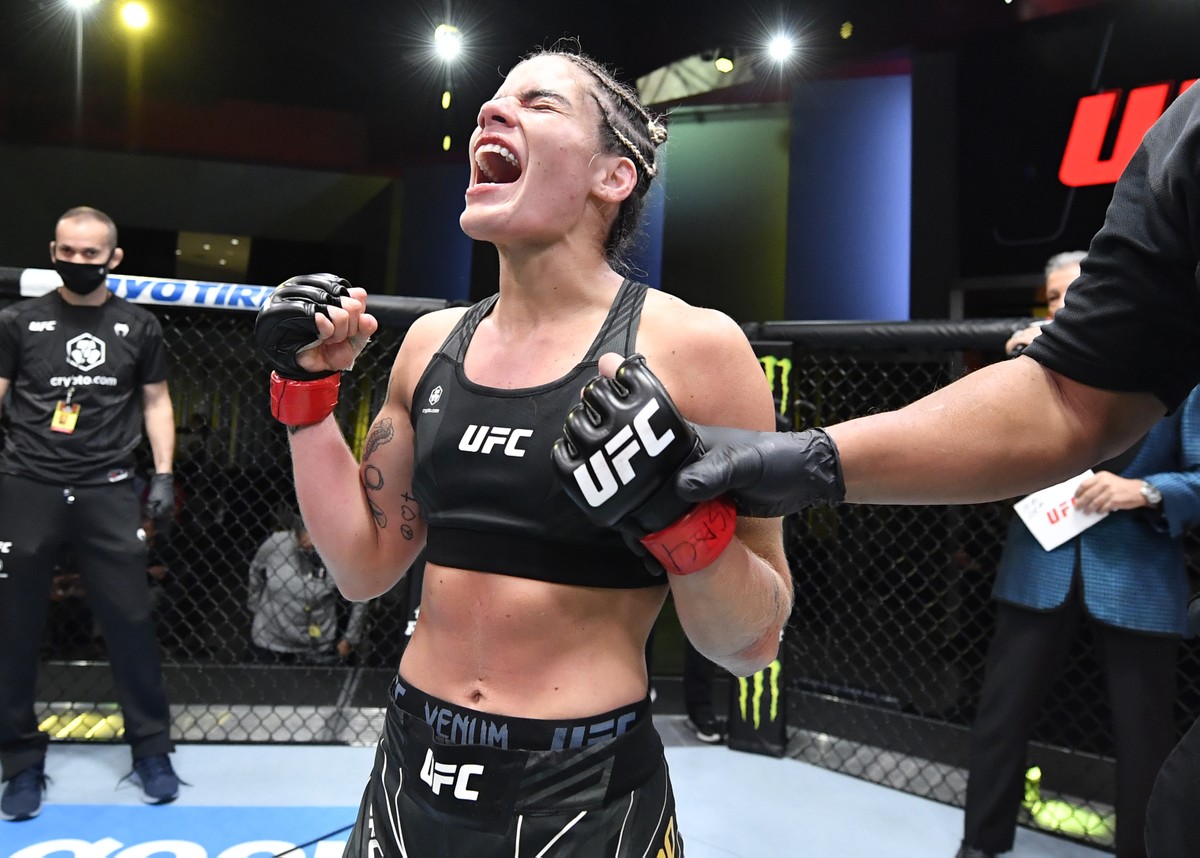 The UFC Vieira x Tate preliminary card started with a Brazilian presence: the straw-weight from Paraíba, Luana Pinheiro, showed that she is in the UFC to stay. With a safe and risk-free performance, he beat American Sam Hughes by unanimous decision of the judges (30-27, 30-27 and 29-28), reaching his eighth consecutive victory in his career, and adding the tenth victory in 11 fights as a professional.

The fight started with Luana measuring the distance with jabs that didn’t hit Hughes, but made the American retreat, avoiding her approaches. Halfway through the first round, the Brazilian applied a beautiful judo takedown with a harai-goshi, falling over Hughes to the ground. The American avoided having her back on the ground, but left her neck exposed. Pinheiro tried a guillotine, but the hand escaped. Afterwards, a new takedown put the American once again on the ground, but this time she managed to avoid the attack’s progression and got up, avoiding being attacked until halftime.

In the second round, Sam Hughes came back exposing himself less and avoiding the approaches of Luana Pinheiro. The American launched long-distance blows, and connected hits against the Brazilian when she approached. The round had more balance in the dispute than in the previous one, but with 12 seconds before the break, the Brazilian managed to fit a streak of punches, including a straight left that knocked the American to the rail. Hughes defended himself as best he could, waiting for the end of the round, which happened shortly afterwards.

Excited by the advantage achieved in the previous round, Luana Pinheiro returned to the last round aggressively, but Sam Hughes managed to contain the Brazilian’s impetus. Without getting flustered, the woman from Paraíba started to control the time, avoiding taking risks and countering the attacks of the American woman, who showed wear and tear and had a wound below her right eye. Very calmly, Luana Pinheiro moved and avoided Hughes’ blows, who sought the attack to try to turn the fight around, which didn’t happen.

In the fight in which she broke the record for the shortest time to make three fights in the modern UFC era – just 43 days -, Mexican straw weight Lupita Godinez defeated Thai Loma Lookboonmee by unanimous decision of the judges (triple 30-27).

The fight was balanced, with Lookboonmee constantly looking for striking, as she comes from muay thai, while Godinez tried to take the duel to the ground, avoiding giving the Thai room to prepare her blows. After a warm first round, the Mexican returned for the second round already knocking the Thai woman down by the rail. Lookboonmee got to her feet, but was knocked down again. Godinez got the mount and tried a rear naked choke, but he didn’t have time to finish the move.

Aware that the way to victory was the grappling fight, Godinez once again took down Lookboonmee early in the third round, and quickly went for a heel lock. The Thai defended herself and was in the Mexican’s guard. Even with Lookboonmee trying to exert some control on the ground, Godinez proved to be superior in this area, and returned to imposing his game on the Thai, controlling his rival in the grappled fight until the end.

UFC Font x Aldo. Duel of candidates for the bantamweight title you watch live only in Combate! — Photo: Infosport

UFC Font x Aldo. Duel of candidates for the bantamweight title you watch live only in Combate!