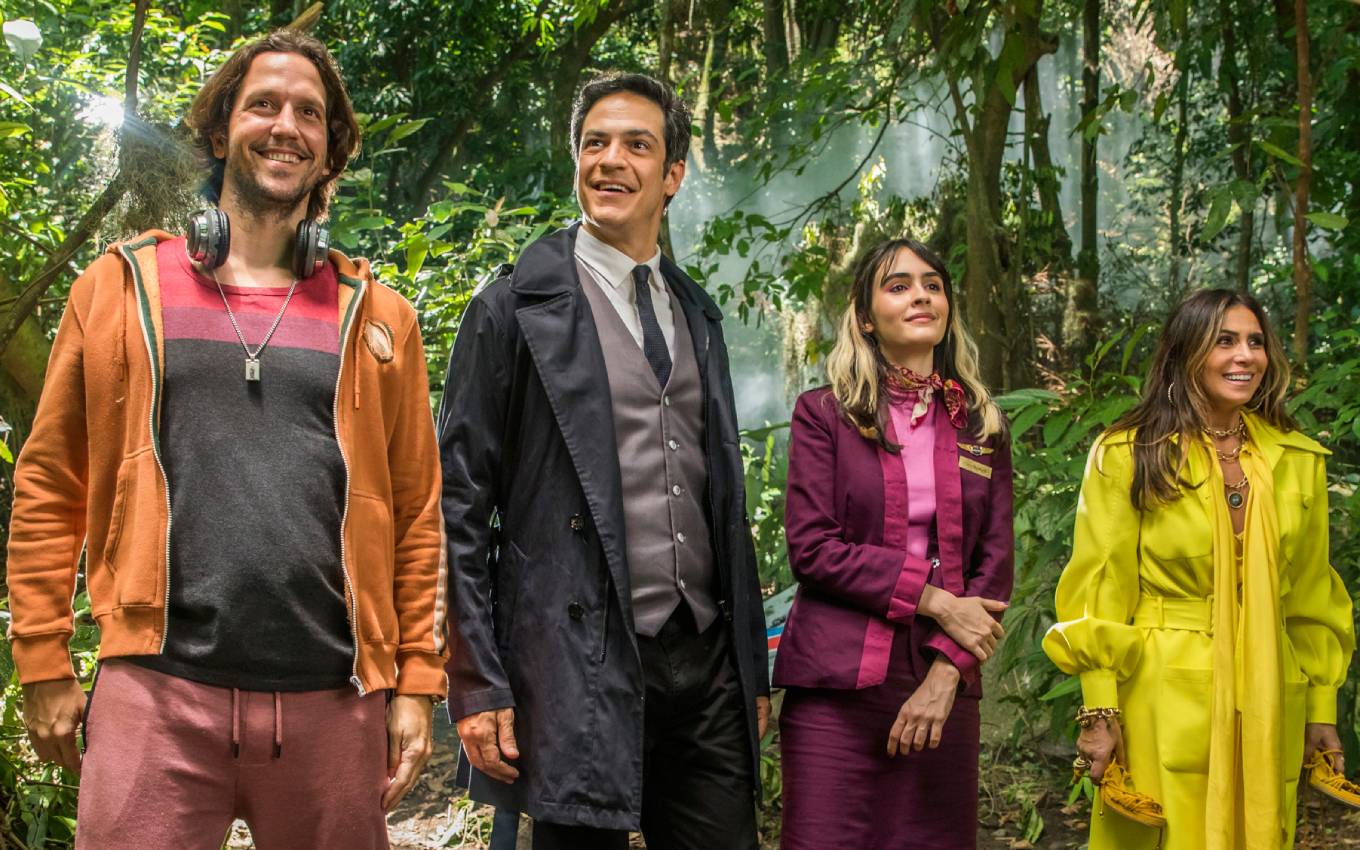 This Monday (22), the Pega Pega rerun will open space for Quem Mais Vida, Melhor!, a new soap opera of the seven on Globo TV. Completely unprecedented, the plot promises to deal with death lightly and will have four protagonists, who will be united by fate when they suffer a plane crash. They’ll find out they’ve been given a second chance and resurrect, but with one catch: after a year, one of them will die permanently.

A Morte will also be a character in the plot, personified by actress Marcella Maia, known as A. Maia. The figure will haunt the lives of the main characters.

With the artistic direction of Allan Fiterman, the series will also have an aesthetic full of vibrant colors and wants to surprise viewers with some new features at the time, even making use of resources already seen on Record.

Know what to expect from The More Life the Better:

The protagonists of The More Life, The Better!

The starting point of the novel will be the meeting between four completely different people. Paula (Giovanna Antonelli), an arrogant businesswoman in the cosmetics sector, Neném (Vladimir Brichta), a football player who dreams of returning to his career, Guilherme (Mateus Solano), a renowned surgeon, but extremely jealous and aggressive, and Flávia ( Valentina Herszage), a young con artist.

By coincidence of fate, they will land on the same plane, which will have an accident, in which everyone will die. However, soon after, they will be informed that there was a mistake and that they can return to life. From there, the four of them will try to fix their problems, but they will find that it will not be easy.

Paula, for example, will try to save her company from bankruptcy, while she will live at odds with her great rival, Carmem (Julia Lemmertz). At the same time, feelings beyond friendship will blossom between the protagonists. Paula will fall madly in love with Neném, while Flávia and Guilherme will engage in an affair.

The work also marks the debut of Mauro Wilson in the world of soap operas. Until then, the writer had been responsible for series such as A Mulher Invisível (2011) and Doce de Mãe (2014), which earned him two International Emmy Awards.

Although this is the author’s first serial, he himself admits that the story isn’t exactly original. It is based on Wilson’s own year-end special, The Amateurs.

The plot spoke precisely about four strangers who knew each other on the verge of death, but were given a second chance. “When I had this idea, I was 40 years old and I almost died. I choked at home by myself and couldn’t breathe. At that moment, I just thought about everything I was going to lose. Then I had this idea that this would be a second chance”, highlighted the novelist.

In The More Life, the Best!, A. Maia will play a Death inspired by the Disney villain Maleficent. She will follow the protagonists’ lives up close, to remind them that one of them will leave for a better one soon.

“She will show them that time is passing. She is a beautiful, exuberant woman, she is the Death of the cartoons. Maleficent is my inspiration. And she is not frightening at all (laughs)”, said the author.

New to soap operas, the actress who will play the character reported in September that she was a victim of transphobia. “I was approached by a stranger, and this guy started attacking me, pulling my hair, hanging me and trying to rip my breast out, screaming that I wasn’t from God,” she said.

Valentina Herszage will be repeated on time

Although the new telenovela has nothing to do with the current rerun of the seven o’clock band, the large number of actors who will be present in both productions draws attention. Mateus Solano, Valentina Herszage, Elizabeth Savala, Marcos Caruso, Jaffar Bambirra and Gabriel Sanches are all names that will not leave the TV after the end of Claudia Souto’s plot.

There will even be a couple repeat: Elizabeth Savala and Marcos Caruso will once again live a romantic couple, now in the skins of Nedda and Osvaldo. “Working with Savala is always an immense pleasure. The possibilities are quite different, the two soaps have nothing to do with each other. We have immense chemistry, I think that makes it much easier. It’s another job, we’re different, they’re two absolutely different characters,” said Caruso.

In addition to abusing vivid colors in its aesthetics, The More Life, the Better! it will also seek to be a very musical novel. For this, there will be weekly clips, in which the characters will sing a song, something similar to what happened in the novel Genesis, by Record. There will also be new songs, made for the soap opera.

“The soap opera is very musical. We decided together to build a musical. So, once a week there will be not a number, but a song with a performance, the protagonists singing. Every week there will be a surprise, a new song. the story,” explained Fiterman.