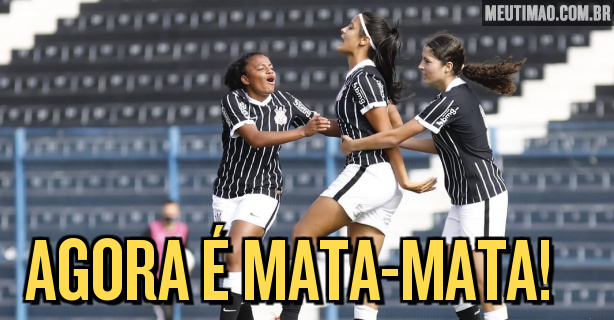 Corinthians won another victory this Sunday afternoon. Playing at Fazendinha, Timão overcame the Olympic Center with a goal by Vick and guaranteed itself in the next phase of the Paulista Female Under-17.

The alvinegra team pressured the visitors throughout the game, but only managed to score at the beginning of the second stage. The three points made the São Jorge park team remain in third place in group 2, as Santos and São Paulo also won their duels.

Now it’s playoffs! Corinthians returns to the field on a date and time that have yet to be defined. Timão will face Brothers FC in the next phase of the Paulista U-17, which is already knockout.

Before the ball rolled, Corinthians athletes took a stand against racism. In the moment of silence, the players raised their arms with clenched fists in the now classic fight gesture. Recently, it is worth remembering, striker Adriana was the target of racial offenses during a Libertadores match. In addition, last Saturday marked Black Consciousness Day.

Before the ball rolled, the Brabinhas also sent their message: RACISM NO!
✊🏿

The first half was of many exchanges of passes and finishes by Corinthians, which stopped in Rayssa’s good defenses. Throughout the first half, Vick, Miracatu and Laysla gave the opposing archer a lot of work.

On minute 38, Miracatu received the cross from afar, dominated inside the area and without dropping the ball, hit the first shot. Rayssa went down and lightly touched the ball, just enough to clear the end line.

Three minutes later, Tosti carried the ball down the middle and managed a good pass for Laysla. The Corinthians player received and hit at first, but slipped and Rayssa made a good save.

For the second half, Dani Alves made two changes and put Maria Luisa and Stefanie in the places of Manu Olivan and Miracatu. Shortly after, the first of them was essential for Corinthians to open the scoring, with almost five minutes. Shirt 7 kicked from the edge of the area, the ball deflected on the marking and the goalkeeper Rayssa got away badly. The leftover went to Vick, who hit first and put the ball in the back of the net.

The following minutes were of few opportunities and two more changes in the team: Isa Morais and Nenê took the place of Laysla and Tosti. In the 24th minute, the pair that had just entered the field created a good opportunity. Isa Morais crossed in the area and Nenê tried to head, but Rayssa made a good save.

Vick on three occasions and Stefanie on two others were in danger with shots from outside the area, but the ball went through the end line or was well defended by the opposing goalkeeper. With no more opportunities, the game came to an end with a 1-0 victory by Timão and guaranteed third place in the group.