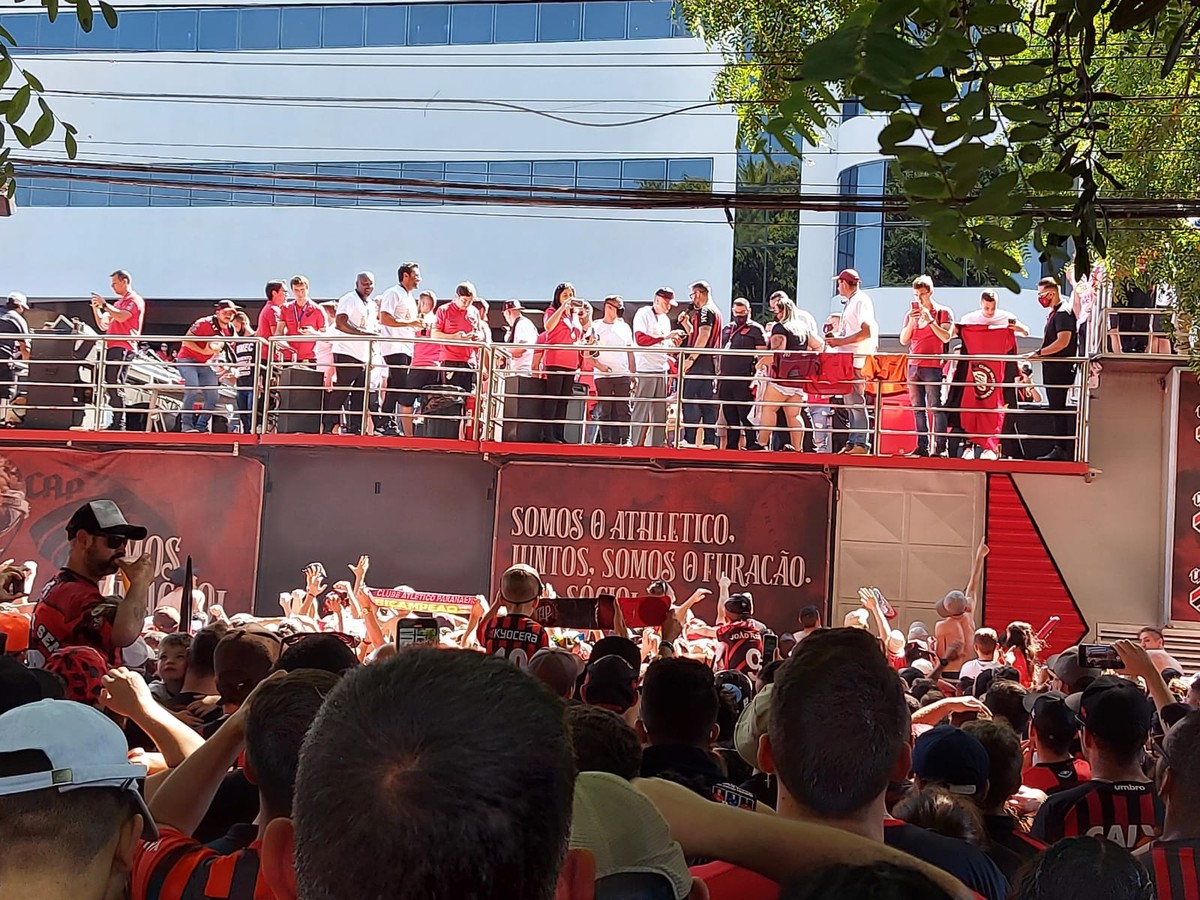 Athletico left Uruguay late this Sunday morning after beating Red Bull Bragantino and winning the Copa Sudamericana title, and went straight to the Arena da Baixada to celebrate with the fans. The cast arrived around 14:00 and presented the cup on top of an electric trio on a street in front of the stadium.

According to an estimate by the Military Police, more than 3,000 fans went to the venue to celebrate with the South American champions. The Athletico delegation spent the whole time in the electric trio and presented the fans with shirts and hats thrown from above.

One by one, all the players in the cast were introduced by the announcer who was leading the party. Goalkeeper Santos, defender and captain Thiago Heleno, midfielders Nikão and David Terans and forward Renato Kayzer were the most celebrated.

Author of a great goal in the final against Bragantino, the shirt 11 received special affection from the athletics present. Shouts of “Stay, Nikão”, repeated by several athletes on top of the electric trio, moved the player, who just waved back to the crowd – the midfielder has a contract until the end of the year and is already speaking in a farewell tone.

Neither player nor coach Alberto Valentim spoke at the event. The only one who spoke to the crowd was President Mario Celso Petraglia. The director said that Athletico thinks of all its fans and not just its members and the public that attends the Arena da Baixada.

– We make football for you. It’s not just for the rich fan, but for the poor as well. Athletico belongs to all fans – said the president.

Petraglia spoke again about the club’s ambition to win a Libertadores and a Club World Cup in the future.

– Our promise of winning the World Cup ten years after the end of the renovation of our Arena ended up being hampered by the pandemic. We lost two years. Even so, we won a Copa do Brasil, two Copa Sudamericana and we are in yet another final of the Copa do Brasil. Let’s conquer Libertadores and let’s conquer the Club World Cup assured Petraglia.

Many athletics brought coolers with drinks and even beach chairs to make themselves more comfortable.

On top of the trio, the players took the opportunity to celebrate. Many of them, like Nikão, drank the energy drink of the brand that sponsors Bragantino. But beer was out of the question. Defender Thiago Heleno returned a can of beer that was thrown by a fan.

After all, Athletico’s season isn’t over yet. Hurricane travels to São Paulo at the beginning of the week for two important duels for the Brazilian Championship. Face São Paulo, on Wednesday, at Morumbi, and face Corinthians, on Sunday, at Neo Química Arena.