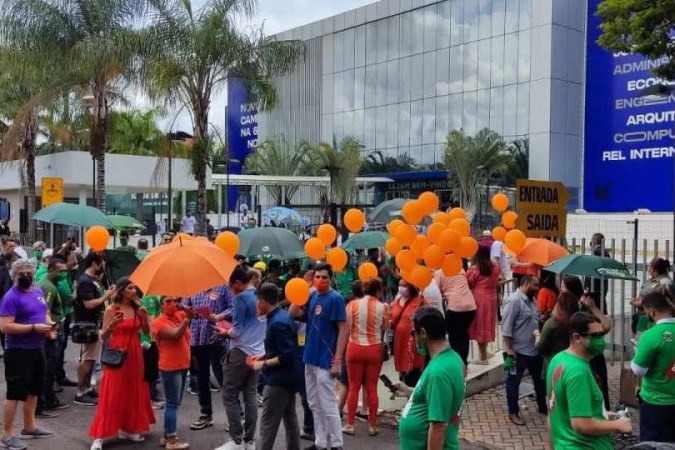 The Federal District Section of the Brazilian Bar Association (OAB-DF) holds, since 10 am this Sunday (11/21), the election to choose the new president who will command the entity for the three-year period from 2022 to 2024. The election, this year, takes place in a hybrid way, being able to be held in person or virtually. The result will be released today at 18:00.

Five candidates: Délio Lins and Silva Júnior, Evandro Pertence, Guilherme Campelo, Renata Amaral and Thais Riedel are running for the main office of the body. According to the organization’s current regulations, the ticket that wins the highest total number of votes will win. The result is expected by about 45 thousand active lawyers in the DF. To vote, the lawyer must be registered with the OAB-DF active and up to date with the entity’s accounts.

The atmosphere in one of the main polling stations, at the Brazilian Institute of Education, Development and Research (IDP), in Asa Sul, was tense and full of rivalry between the flames of lawyer Thaís Riedel and lawyer Délio Lins. Crowds, shouts and exchange of insults marked the morning of voting to choose the president of the ticket.

Attorney Helena Souza, 53, has high expectations for the new administration that can take over the OAB. “We need improvements in the assistance rate, in our health plan and that defend more our prerogatives, which have been neglected in recent years. The new administration is bringing this expectation that the lawyer will be better preserved and valued, especially a beginner lawyer”, he says.

This year, it was the first time that the OAB elections took place in a hybrid way, before the lawyers could only vote in person. For the lawyer, the system is fair and benefits both the lawyer who has no confidence in voting online and the one who still doesn’t feel safe on the street. “This last year things have accelerated a lot. Hence the technology too. We started solving so much online, why not vote? A lot of people still don’t feel safe leaving the house, so voting online was a good solution”, he points out.

Check out the profile of the candidates for president of the OAB-DF:

>> Délio Lins e Silva Junior is a criminal lawyer and the current president of the OAB-DF. He studied law at the University Center of Brasília (Ceub), completing his graduation in 2000. He has a postgraduate degree in economic criminal law, a master’s degree and a doctorate in criminal law at the Faculty of Law of the University of Coimbra. Délio was a university professor and chairman of the Commission for Supporting New Lawyers and the Honorary Committee.

>> Guilherme Campelo is a tax lawyer. The candidate served as president of the Tax Law Commission of the Brazilian Association of Lawyers (ABA). In addition, Guilherme received three medals in recognition of his work: that of the judicial merit order of work, in the official grade of the Superior Labor Court; that of professional merit in legal sciences, awarded by the Brazilian Academy of Sciences, Arts, History and Literature; and the Ruy Barbosa Judicial Merit Order, awarded by the Latin American Academy of Human Sciences.

>> Renata Amaral is a lawyer specializing in private law and a doctoral candidate in legal sciences at the Universidad Católica Argentina. Member of the Zveiter Law Office, in Rio de Janeiro, the candidate is co-founder and current president of the Association of Lawyers for Gender and Race Equality. Within the order, she held the positions of president of the Committee on Constitutional Affairs and the Committee on Women Lawyers of the OAB/DF.

>> Evandro Pertence holds a degree in law from the University of Brasília (UnB), with a postgraduate degree in procedural law and economic and business law. In the years 2001-2003, he was a member of the Human Rights Committee and of the Ethics and Disciplinary Court of the OAB-DF. In 2002, he assumed the presidency of the Commission for Support to New Lawyers. Evandro was a federal counselor twice and national vice president of the Commission on Prerogatives at the National OAB. He served as a judge at the Regional Electoral Court of the DF (TRE-DF).