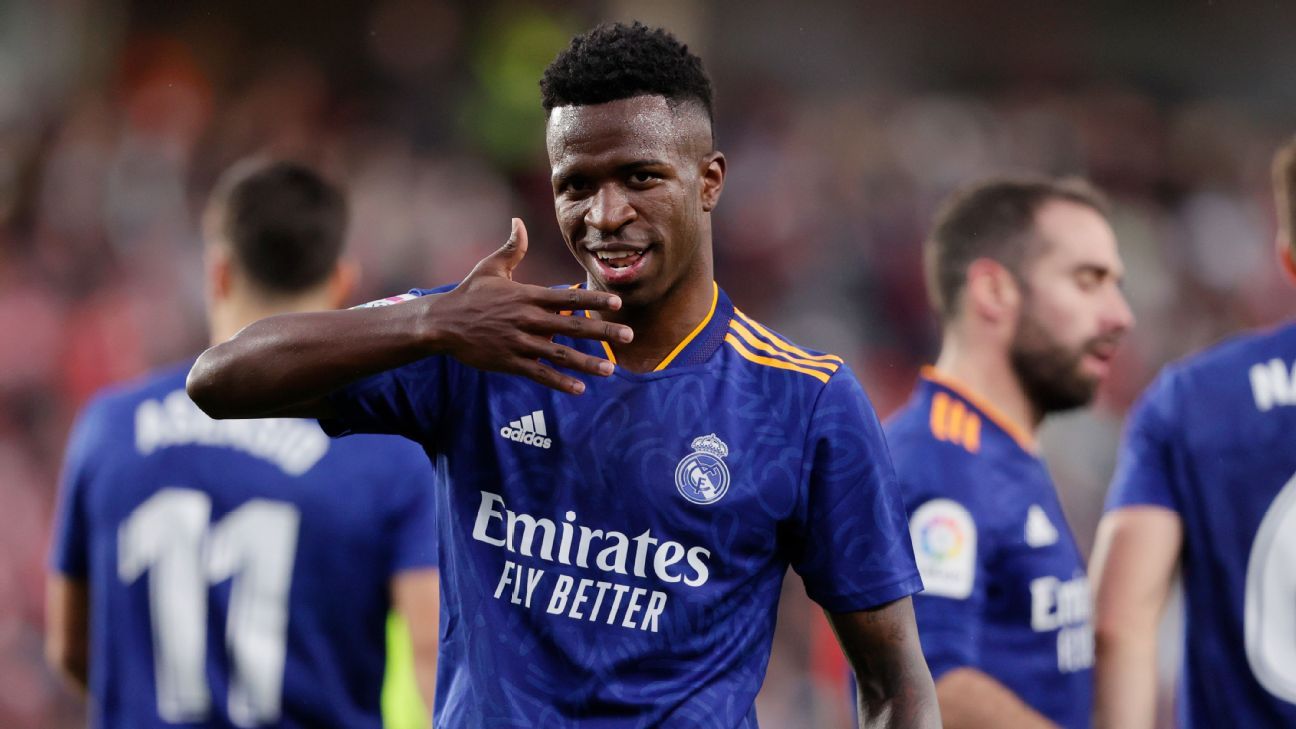 Real Madrid beat Granada, away from home, by 4-1, this Sunday (21), in a duel valid for LaLiga. Asensio and Nacho opened the way for the meringues, Luis Suárez cashed in, and Brazilian Vinicius Jr. and left-back Mendy scored the other two.

The victory in Andalusia would give LaLiga the lead to Real Madrid. Because of this, Carlo Ancelotti’s team held the ball for most of the first half, but the low lines of Granada’s defense prevented a more incisive attack on the attack, mainly by Vinicius Jr. open on the left side.

Granada didn’t scare them and tried to score a counterattack, but they made mistakes in passing. Then, at 18 minutes, Kroos escaped the marking in midfield and called Asensio. The Spaniard advanced unmarked down the right and hit to open the scoring for the visitors.

With the match controlled, the second goal came soon after, this time with Nacho, who completed a corner kick on the left. Real Madrid ruled the match and only didn’t score the third because, in another submission by Asensio, Soro took it over the line and avoided the goal.

The third goal would be missed by the meringues. After a ‘nap’ from Vinicius Jr., Granada’s midfield recovered the ball and served Luis Suárez. The Colombian submitted the submission and had a deflection in defense to cash in and set fire to the match. Real seemed to have sensed the goal and were cornered by Granada, who almost equalized with a header against Casemiro, saved by Courtois.

The meringues reacted and almost scored the third with Benzema, who stopped in a beautiful defense by the goalkeeper. The second half started at the same pace as the first half. More exposed, Granada could no longer mark the merengues talents at close range, which were piling up wasted chances.

Modric and Kroos missed clear chances, which could have killed the match early on. But, the third came with Vinicius Jr. In a bid built by Benzema, the Frenchman served Modric, who just rolled for the Brazilian to push into the net without a goalkeeper.

Vinicius, incidentally, became the ‘showman’ in the second half. After giving a hat, the Brazilian took to the attack, left his rival on the ground and was only stopped with a hard cart from Moncho, who received a direct red card. The former Flamengo had a great chance to score the fourth goal after an assist by Benzema, but he finished badly and sent him over to the goalkeeper.

Bood by the crowd after the show, Vinicius Jr. left the pitch for Rodrygo’s entrance. The Brazilian entered the field well and even gave Benzema a back-heel assist, but the Frenchman finished it off. Moncho’s expulsion left Granada surrendered on the field and without any reaction.

On the basis of the ball touch, Real Madrid reached the fourth goal. Casemiro found a beautiful pass for Mendy, who entered alone on the left side and touched the goalkeeper’s exit to forward the rout.

From then on, Ancelotti started saving his main names and giving chances for names like Jovic, Isco and the boy Camavinga to gain rhythm in the game. Granada almost lost it with a header from Molina, but Courtois made a great save.

Even with the scare suffered, the meringues just waited for time to pass to confirm another victory in LaLiga.

Real Madrid takes the lead from LaLiga with 30 points. Granada is in 18th position, with just 11.

The experienced German was the one who started the merengue victory and consolidated Real Madrid’s best moment on the field. In the first half, the first two assists of the merengue victory came out of the feet of Kroos. Firm in marking, the ace also helped on the left side to facilitate Mendy’s moves ahead.

It was bad: Rochina

The Granada striker could do little against Real Madrid. Skewered further on in the first stage, Rochina was practically null and still suffered an opening on the right side in the marking in the second half to try to hold Vinicius Jr., but without success.

Grenada visits the spanish, next Friday (26), at 17:00, by LaLiga. Real Madrid face Sheriff, away from home, for the fifth round of the group stage of the UEFA Champions League, on Wednesday (24), at 5 pm.