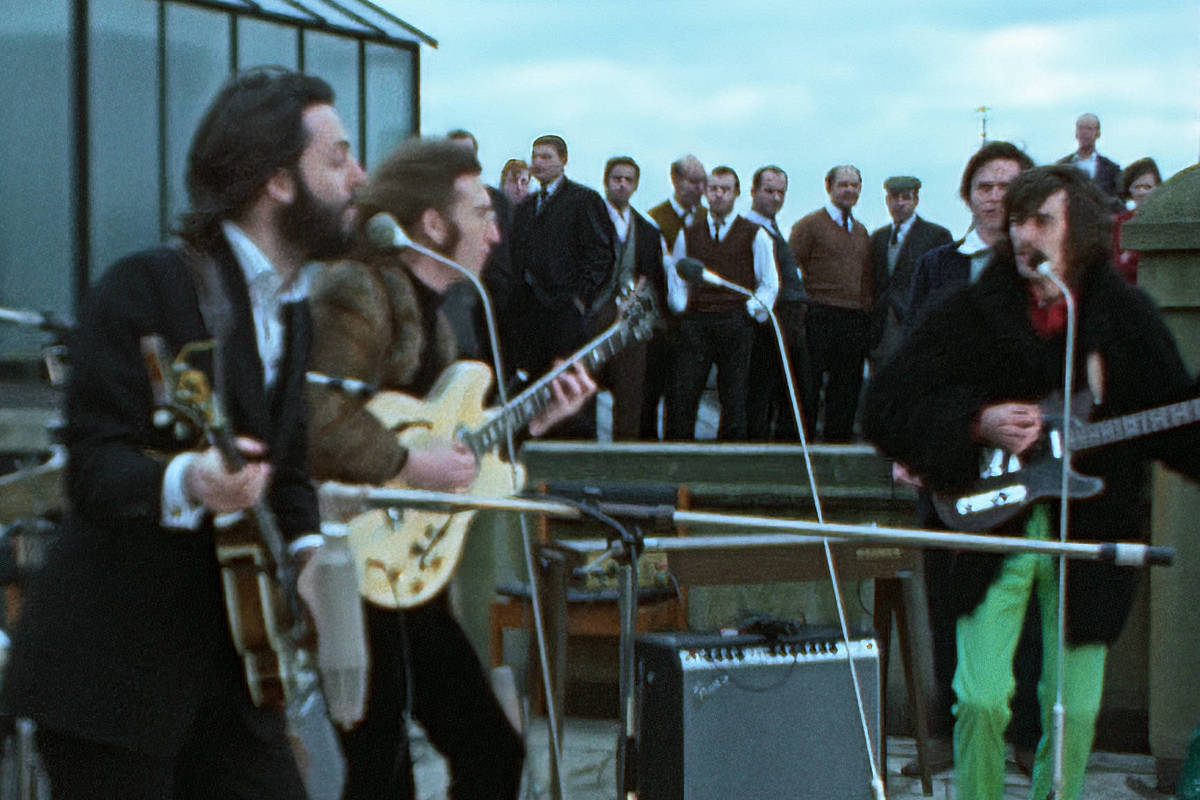 It’s a cold winter morning in January 1969, and three of the four Beatles are gathered in a cavernous London film studio; the cameras are rolling, and there are microphones turned on everywhere. “Lennon is late again,” says Paul McCartney in a tone of no surprise as he plugs in his bass.

Ringo Starr and George Harrison are seated across from him and they look a little groggy, and there’s a tray of jam toast placed beside the musicians. McCartney starts playing and singing, looking for inspiration. Within minutes, he seems to have a mid-tempo bass line, and a familiar melody emerges. “Get back,” he sings, in a contained howl. “Get back to where you once belonged.” Almost by magic, a Beatles classic begins to form, seemingly out of nowhere.

Later that day, after Lennon’s arrival, the four rock deities settle into a circle — and grunt. The band has ill-defined plans for a TV special featuring previously unreleased songs, but most members seem to look at the prospect with fear — and they may also be afraid of each other. Lennon, who seems utterly bewildered for much of the meeting, vaguely states that “communication” with an audience is his only goal, and McCartney impatiently challenges his colleagues to show some enthusiasm for the project or drop it altogether.

Harrison suddenly lets out aloud what everyone seems to be thinking. “Maybe it’s time for a divorce.”

These two successive scenes in Peter Jackson’s documentary series “The Beatles: Get Back,” a seven-hour-plus project that will air in three episodes on the Disney Plus service Nov. 25-27, encapsulate the twin sides of most contested period in Beatles history — the artistic creation glory of the most beloved and influential rock band on the planet, and the grueling conflicts that led to their dissolution, announced a year later.

For Beatles fans or any 20th century pop culture scholar, the documentary offers startling glimpses into the band’s professional life and the tensions surrounding its members.

“It’s more or less the realization of that impossible fan dream,” Jackson said in a video interview from Welington, New Zealand, where he has worked for much of the past four years in the dimness of an editing room, surrounded by memories of the Beatles.

“I wish I could travel in a time machine and position myself in the corner of the stage they were working on,” he said, describing an enduring dream with the same intensity as a child prays for the most coveted Christmas gift. “Just for a day, so I can see them, and I’d just be quiet, just sitting there.”

“Well, you know what?” he continued. “The time machine now exists.”

Jackson’s film is also a new round of one of the most enduring debates among Beatles scholars. The band’s journey in January 1969 started with intense pressure for them to put on a groundbreaking conceptual live show, and ended with something unconceptual and wonderful – a show held without warning, on top of a London building, which served as remind the world of the Beatles’ majesty, spontaneity and humour. “Maybe we made it through the audition,” Lennon joked at the end of the show.

The period is already the subject of “Let It Be”, from 1970, a work of cinema verité by Michael Lindsay-Hogg; the film’s soundtrack was the last studio album released by the Beatles. Over time, the film gained a reputation as a dismal record of the band’s collapse, and later accounts by Beatles members seem to support that view. Lennon described the sessions as “hell”, and Harrison called them “the winter of discontent”.

But this narrative has long been contested by some Beatles scholars. Lindsay-Hogg’s film, they argue, was selectively edited in order to show as much dismay as possible—perhaps as a way of retroactively explaining the breakup. “Abbey Road”, the Beatles’ latest LP in recorded order, was recorded after “Let It Be” but released earlier. Indications of pirated recordings show a mixture of pleasure and frustration known to every musician who’s at take 24 of a particular track — and with a deadline.

The very existence of “Get Back” is a sign that, more than half a century after the Beatles broke up, their story remains open to interpretation and to in-depth research and alternative narrative.

Jackson’s film, which arrives with the authority of a lightning bolt from a mountaintop in Middle-earth, may become the final word in discussions over this period, although the story the documentary tells is far from simple.

Jackson, an Oscar-winning filmmaker for the “Lord of the Rings” trilogy — and an avowed Beatlemaniac — has gained access to nearly 60 hours of previously unreleased footage provided by Apple Corps, the Beatles’ company, and no restrictions have been placed on how he could use the records. The instruction was just to restore the movie and tell the full story.

The Beatles, or at least the companies that represent them, were happy to accept Jackson’s retelling of the story, and a trailer for the documentary showed moments of playful brotherhood, with the band dancing and making out in the studio. Jeff Jones, president of the Apple Corps, promised that the new film would “dispel the myth” that those recording sessions were the final nail in the Beatles’ coffin. But Jackson said the band did not influence his work.

“Everyone more or less thinks we’re going to overlook the controversies” because the Beatles authorized the film, Jackson said, laughing. “But actually it’s pretty much the opposite. It shows everything that Michael Lindsay-Hogg couldn’t show in 1970. It’s a really direct look at what happened.”

For fans who recall the Lindsay-Hogg movie or read lurid stories about it in dozens of Beatles books, the scenes Jackson depicts, with friends playing, and moments of raw creation, catch the eye. We see the Beatles making fun of their peers, mimicking smug accents and doing absurd humorous scenes that look like something out of a Monty Python sketch.

“You can see those four great friends, great musicians, who connect and develop songs. It’s all there, very clear on the screen,” Jackson said.

The director’s restored footage in “Get Back” is stunningly clear and helps to lay out the outlines of a story of creative anxiety and personal comforts within the Beatles stronghold. Assistants pour wine to the musicians while they rehearse; Yoko Ono paints Japanese calligraphy, while Lennon and McCartney, a few feet away, mock the recording of “Two of Us,” adopting bizarre accents.

But the suffering doesn’t seem to be far away; the fights escalate so much that it begins to seem miraculous that the Beatles can still stick together. At one point, Harrison quits the band for a while, apparently annoyed by his subordinate status. In the studio cafeteria, Lennon tells McCartney that the disagreements between the band and their lead guitarist were “an open sore.”

After Harrison leaves the studio, the rest of the Beatles have a loud and angry jam session. Starr nearly destroys the battery. Ono, dressed all in black, stands at the microphone and howls to a wild climax — perhaps the most violent sound the Beatles have created in their careers.

A recurring theme is the band’s discomfort with the role of Ono, who spends all her time sitting next to Lennon during sessions and would later come under fire from fans for her alleged role in the band’s breakup. A book that accompanies the film and features additional transcripts of the recordings quotes Lennon as telling McCartney that “I would sacrifice all of you for her.”

But there was too much at stake for the Beatles, and the prospect of the band’s breakup hangs like a cloud over the entire film. In the beginning, McCartney suggests an idea for an as-yet-undefined TV special. The Beatles’ songs, he proposes, would be interspersed with reporting on earthquakes and other “hot” news events around the world. And in the end, says McCartney, “the final bulletin would be ‘The Beatles broke up’.

To some extent, “Get Back” and the original “Let It Be” are like references in a study of truth. Do the images really show the end of the Beatles or has history misunderstood the period for all these years? The evidence mostly shows that the band continued to feel joyful and creatively fruitful, or did the members no longer stand the company of their peers? The answer might be “all of the above”.

In a note accompanying a re-release of the “Let It Be” album, McCartney wrote that the original film was “very sad because it dealt with the breakup of our band, but the new film shows the camaraderie and love the four of us felt each other.” for others”.

Lindsay-Hogg believes that not only fans but perhaps the Beatles as well have been misinterpreting “Let It Be” for years. “I think part of the bad reputation of ‘Let It Be’ is that no one has seen the movie for a long time,” he said in an interview. “And it tended to be very confused with the moment it was released, right after the band broke up.”

The Beatles didn’t break up in January 1969, of course. Later in the year, they recorded “Abbey Road” very carefully. Most of the songs on that record — such as “Octopus’s Garden”, “Mean Mr. Mustard”, “Carry That Weight” and “Something” — are heard in their early versions, on “Get Back”.

But Jackson’s film makes it clear that the end was near. If there was a real culprit in the dissolution, it was the business conflicts that arose in 1969, when the band disputed who should represent them, and Lennon and McCartney tried unsuccessfully to seize control of the company that held the rights to licensing of your songs.

All of these problems are foreshadowed in “Get Back” with the mention of a single name – Allen Klein, an American artist manager who arrived a few days before the show at the top of the building to offer his services to the band. Shortly after the events portrayed in “Get Back”, Lennon, Harrison and Starr signed with Klein; McCartney refused, and that split was never resolved. Klein died in 2009.

“Our movie doesn’t show the breakup of the Beatles,” Jackson said, “but it does show the singular moment in history that can perhaps be described as the beginning of the end.”

If scholars and the position of Beatles fans have proved anything it is that even a contradictory summary of the band and its influence may still be true. The Beatles were a pop boy band that ended up pushing rock’s creative frontiers farther than any rivals; almost every day of their existence as a group has been exhaustively documented, but fully describing their motivations is impossible.

“Get Back” seems to contain all these crowds, the pleasure, the tension, the disputes and the wonder of seeing the Beatles only playing music from the top of the building. “There are no good guys in the movie. There are no bad guys,” Jackson said. “There are no villains. There are no heroes. It’s just a human story.”