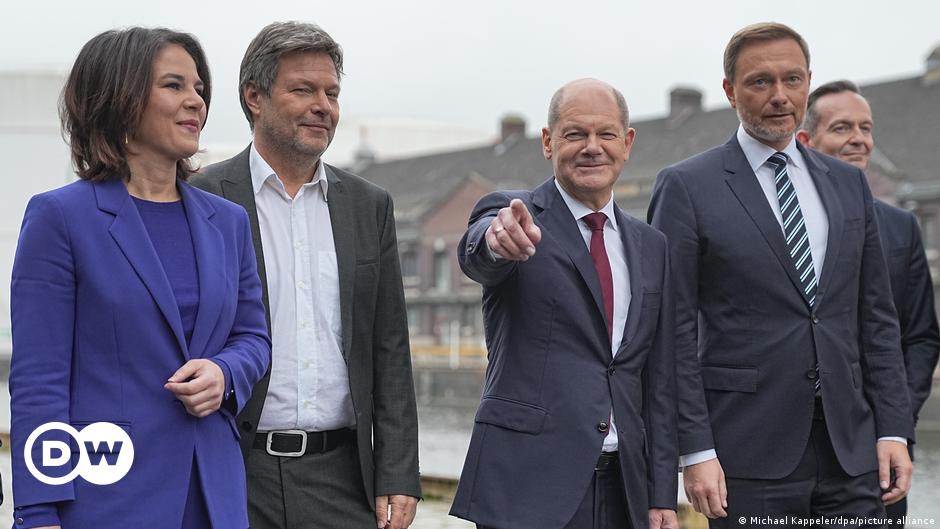 Leaders of the Social Democratic (SPD), Green and Liberal Democratic (FDP) parties announced this Wednesday (24/11) that they have reached an agreement to form a new government coalition in Germany, which will succeed the federal chancellor’s administration Angela Merkel, who leaves power after 16 years.

The agreement, which was negotiated over two months and spans 177 pages, has yet to be approved individually by each of the three parties. That should happen in the next few days.

If this last stage is successfully completed, Social Democrat Olaf Scholz will be Germany’s next Federal Chancellor. The tripartite alliance hopes to complete the final details in time to make Scholz official as Merkel’s successor on December 6th.

Scholz’s SPD won the most votes in the September election, but still did not get the majority needed to govern, so it sought to form an alliance with Greens and Liberals, who came third and fourth in the election, respectively. Germany has not had a three-party governing coalition since the late 1950s.

At a press conference on Wednesday, Scholz said the talks were conducted in a “friendly but intense atmosphere, full of confidence.” The government plan involved 22 working groups with members from the three parties. Few details have been released over the past two months, but the parties themselves have indicated that some points have caused friction, especially the new environmental policy, which has divided the greens and liberals.

Ideologically, greens and social democrats have more points in common, especially in the social area, whereas German liberals have a more pro-market view. But after eight weeks the parties finally agreed on a government plan.

The agreement provides for significant changes to Germany’s environmental policy and addresses the country’s persistent problems, such as the aging German population and housing shortages.

– Formation of a team to deal with the pandemic with the Federal Chancellery.

– Mandatory vaccination was not contemplated in the plan, but Scholz stated that it may become mandatory in certain professional categories, especially in health.

– Doctors will no longer be prohibited from advertising that they perform abortions. The procedure is legal in Germany, but outdated laws restrict professionals from advertising on their websites that their offices carry out the practice.

– Legalization of marijuana for recreational purposes, including sale in authorized stores. The objective is to combat illegal trade, protect users and make it difficult for minors to access the substance. The three parties also intend to invest more in damage control and awareness actions. These were liberal and green flags.

– Creation of a Ministry of Housing.

– Build 400,000 new homes a year to combat the country’s housing shortage and high rent costs. A quarter of these new apartments will be allocated to low-income housing.

– The “hire brake” should get stronger. In areas with a housing shortage, rents can only increase by up to 11% in three years, instead of 15% today.

– Reform the electoral system to make it more difficult to “bloat” the Parliament, which gains more and more deputies at each election because of the particularities of the German voting system.

– Immigrants will be able to apply for German citizenship after five years – or in three if they prove to be well integrated. At present, the process can only start after six or eight years.

– Ending restrictions against dual citizenship, allowing Germans to acquire other nationalities outside the European Union or immigrants not having to renounce their original nationality when naturalizing Germans.

– More refugees will be able to bring their families to Germany. Family reunification for this group should be facilitated.

– References to the term “race” should be removed from the German Constitution. The article of the Charter that addresses the prohibition of discrimination must now include a reference to gender identity.

– Create legislation so that gender identity is based on self-declaration, without the need for expert approval.

– To combat the presence of extremists in the state security apparatus, the new coalition plans to create a department to deal with complaints and allegations, appointing an independent police commissioner from the Bundestag.

– The Hartz IV unemployment benefit program will be replaced by a less bureaucratic “Civic Fund”. Unemployed people will be able to apply quickly and digitally.

– Strengthen children’s rights and voice on issues such as family custody disputes.

– The minimum wage should rise to 12 euros an hour – today it is 9.6 euros. This was a banner of the Social Democrats.

– Restore the so-called “debt brake” – which limits the amount the State can borrow – until 2023. The mechanism had been suspended to allow for extra public spending during the pandemic. The measure was one of the banners of the Liberal Democratic Party.

– Germany must have armed drones, and no longer just observation aircraft.

– The three parties called on Russia to stop destabilizing Ukraine.

– On the other hand, the document does not contain references to the controversial Nord Stream 2 gas pipeline, which links Russia directly to Germany and is seen by strategists as a tool to increase Russian influence on energy issues.

– By 2030 the share of renewable energy should rise to 80% in Germany’s energy matrix.

– The three parties point out that Germany should “ideally” abandon the use of coal by 2030, not just in 2038. The agreement also provides incentives to abandon combustion engines in the same period.

– Increase rail freight transport by 25% and have at least 15 million electric cars on the streets by 2030.

– Increase in taxes on CO2 emissions on fuel.

– The three parties rule out the return of nuclear energy.

– Use 3.5% of GDP for research and development investments that will accelerate the transition to a carbon neutral economy.