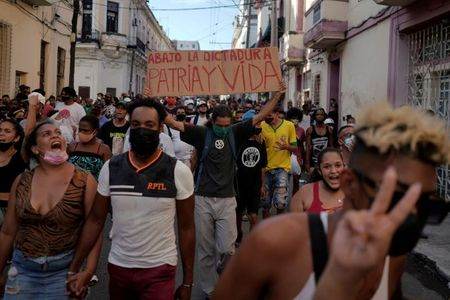 Many things fascinate me about Cuba. Nothing, however, has the hypnotic effect of Clock Radio on me. It is a state broadcaster — like all conventional media outlets in the country, other than blogs and social media pages — that broadcasts “news” punctuated by hourly announcements.

I wrote “news” in quotes because in reality, on the island of Fidel Castro, who died exactly five years ago, everything is processed by the regime and converted into ideological messages to justify the one-party dictatorship and attack any alternative.

The first time I went to Cuba, in April 2003, when Fidel had three dissidents shot and another 75 arrested, I wrote that on the island it always seemed to be Sunday: most Cubans were civil servants, who stayed on their doorsteps, or on the streets. squares, waiting for time to pass or looking for a way to extract dollars from tourists, selling their bodies or products stolen from state companies.

This feeling of an island where time does not pass, of an eternal marmot’s day, is surrealistically synthesized by the monotonous dialing of Rádio Relógio and its delusional messages. Since I discovered the station, on my first trip to Cuba, every time I return (it was four times in total), the first thing I do after arriving from the airport is listen to Rádio Relógio. And record it, to prove later to myself and to others that it really exists.

I will transcribe here the first message I recorded when I landed in Havana in 2016, to cover the funerals and the impact of Fidel’s death. So I didn’t choose the message, to make a bigger impression. Simply because any part of my recordings have the same content in the background.

“Three forty-five minutes. Cuba’s great challenge. Conclusion. Speaking to Rádio Relógio, author Juan González Riva says that it is very easy to say ‘I am Fidel’ (‘faithful’ in Spanish) and thus feel the need to continue his work, but it is necessary to grow our revolutionary posture to confront the enemies of the Revolution. He explained that it is necessary to pay tribute to Fidel with the fulfillment of commitments in honor of his example, and meant that the moment when the Commander’s ashes are deposited with Martí y Céspedes in the Santa Efigênia cemetery will be historic. ‘The Cuban revolutionary process now has more than ever to strengthen and ensure that no details go away, as we will no longer have Fidel to advise us. This cultural personality on the Granma (state newspaper) highlighted the need to preserve Cuba’s immense revolutionary work with the same dignity that Fidel defended throughout his life. He interviewed Jorge Luis Baptista. Clock Radio. Three, forty-six minutes.”

It doesn’t mean that nothing changes for Cubans. When I left José Martí airport (the independence leader mentioned in the message, beside whose tomb Fidel’s ashes were deposited), I realized that something had changed since the last time I was in Cuba, in 2009, to cover 50 years of the Revolution. People on the streets were more flushed, better fed and better dressed.

I spent the next few days investigating, and realized that it was the effect of the economic reforms led by Raúl Castro, Fidel’s brother and successor since his sick leave in 2006, which I also covered. They allowed Cubans to open small service businesses, rent rooms in their homes to tourists, expand private restaurants beyond the four-table limit (precisely the threshold of profitability), buy and sell cars and houses.

When everything is state-owned, there are no small businesses, such as appliance repairs, machine shops, electricians, plumbers, shoemakers, tailors, laundries, hairdressers and so on. The Cubans had learned to fix and mend their things. With the reform, these small businesses proliferated, which generated income.

I was hosted on a scheme similar to Airbnb, which doesn’t exist there because credit cards don’t work due to the American embargo. I booked the room with the help of a Cuban friend. The owner of the house is an electrical engineer. She used to earn the equivalent of $25 a month, the highest salary on a server. I paid that amount per day for the room.

I interviewed a lawyer who changed her formerly coveted position in the legal department of the state-owned international bank for a salad and fruit juice stand. She told me that she was now earning the $25 a week she used to earn a month.

These are changes that have brought a certain amount of well-being, although Cubans’ aspirations for freedom have continued to be repressed. With the pandemic, tourism, the main source of income for this nascent “middle class”, disappeared. The protests then intensified and, with them, the repression.

The Cuban Observatory for Human Rights, based in Madrid, reported having documented “more than 400 repressive actions” to prevent the protests called for November 15th.

On the balcony of García Aguilera’s apartment, government officials placed a large Cuban flag to prevent him from unfurling a banner or white flag. People who tried to demonstrate were harassed by pro-regime militants.

“The Cuban people have been silent for a long time, and it’s time for them to speak freely what they think,” García Aguilera told CNN. For the regime, as for Rádio Relógio, however, there can only be one voice, timeless: that of Fidel Castro.