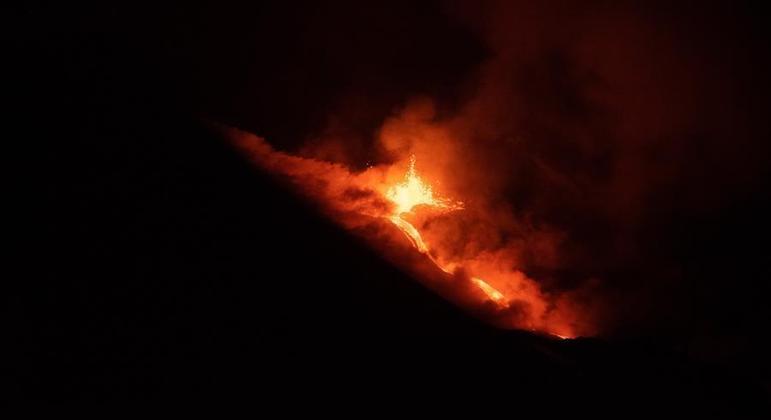 This Thursday (25th), the Cumbre Vieja volcano, located on the island of La Palma, in Spain, had a new lava flow, which reached a cemetery and a photovoltaic solar plant. Volcanic activity started more than two months ago, on September 19th.

The molten rock river emerged early in the morning and descends parallel to the tenth recorded flow, heading towards an area with some already unoccupied houses and plantations, as explained by Miguel Ángel Morcuende, technical director of the Special Plan for the Protection of Volcanic Risk of the Canary Islands (Pevolca).

The new lava river, according to the expert, is said to be “bad news” because it is reaching areas that had not been affected before and “is destroying everything in its path”, despite a recent reduction in speed.

Researchers and technicians are monitoring the flow started today and would meet to analyze the trajectory.

In addition, an increase in the rate of lava emission is being observed, with greater ramification of channels, according to Morcuende.

As for seismic activity, the earthquake with the greatest magnitude recorded today was 3.9 degrees on the Richter scale, at a depth of 11 kilometers.

The tremors continue to occur at low levels, and there are no signs of significant deformations in the ground.

The rate of carbon dioxide emission linked to the eruption is still considered high, at 30,000 tons per day, although the downward trend started on September 23 this year, four days after the beginning of the activity, is maintained.

In the last 24 hours, a high amount of gases was detected in the air in the areas of Las Manchas and La Bombilla, in the exclusion zone created around the Cumbre Vieja. In the rest of the island of La Palma, the situation is considered good or reasonably good.

According to the most recent update, 1,484 buildings have already been affected by lava from the volcano, of which 1,195 are for residential use, 160 for agricultural use and 67 for industrial use.

In all, 340.59 hectares of different types of crops were affected.